Sometimes, life's sense of timing is just oh, so sweet. Remember how I told you that Sunday was the ninth anniversary of my dad's death? Well Monday morning, I got a phone call from one of the secretaries at my high school - a lady I've known for many years and who fondly remembers my father as a great colleague. She was calling to tell me some great news:

My high school is naming their brand new gymnasium after my dad.

I'm very excited about this news. My dad did so many great things for that school, and I'm so glad that they realize that and are honoring his memory in this way. The dedication will be happening at the spring pep rally at the end of May, and my mom, my sister, and I are all going down to SoCal for the ceremony.

My dad rocks on, even after death.

(Photo above is Dad and Seeser in the old gymnasium, about 20 years ago.)

The beautiful and wonderful Kara - the blogger formerly known as Cape Buffalo - has come up with a great new blog idea, and I jumped at the chance to help her out with it. Thank a Stranger is an opportunity for folks to publicly thank those people who've gone out of their way to make life a little easier, a little better, and/or a little more pleasant for a perfect stranger. I put a post up earlier today to thank a very kind flight attendant who helped me out on a particularly tough flight one night. Has someone done something for you lately that merits some public praise? Consider writing something to post at Thank a Stranger - email submissions to thanks and kindness at gmail dot com.

Last in a series of totally unrelated thoughts, some of you have been asking, "What ever happened with Boy X?" Well, let's just say I like him a lot. And let's also say that yes, he likes me a lot, too. We spend a fair amount of time together these days, and I'm very happy about that. However, it does mean that he'll start appearing here on occasion, and that means he needs a name.

Personally, I'd be fine with his continuing as Boy X, but he doesn't like that very much. He has requested that he be allowed to pick his own name, to which I at first consented. But then he decided he wanted to be Batman. Because - according to the story I've been told - he actually is Batman, and all those frogs that I always hear croaking in the ravine behind his house are actually the bats in his bat-cave that he's trained to say "Ribbit" to throw suspicious snoopers off his trail. I'll let you just sit and imagine the look on my face when he told me all this. 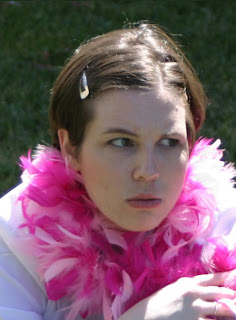 At any rate, I decided that I would put it to you, the five loyal readers I have left - should I resign myself to the pseudonym "Batman"? Should I leave him as "Boy X"? Or should I give him something entirely different?

What are your thoughts?
Posted by Lara at 7:47 PM

boy x, for SURE

Hmmm. Boy X sounds more mysterious, but if this guy is going to be turning up here more often, then that's not necessarily a good thing. Batman sounds silly, but I do like that story he told you; it sounds like something my boyfriend would say. He is frequently trying to convince me that pillows are muskrats and my ceiling is a cantaloupe.

gnomesque - LOL about your boyfriend, seriously.

That is great news about the gym!

It's your blog, you go on and call him whatever YOU want.

I'm trying to find a way to combine the two (Bat X?) and failing =P.

That's wonderful news that your dad is being honored by his school. It's a wonderful thing that his memory and impact are still being felt by the school he obviously loved.

I agree with flutter. Boy X for SURE.

That is wonderful news about your father's memory being honored like that! I am so pleased for you!

I quite like Batboy! And I'm happy for you!

How about Batboy X?

Very pleased for you and great news about the gym too :)

I tried to comment when I read this at lunchtime but work computer wouyld not play.

I think that that is the most beautiful tribute to my Dad. Next time I see my Dad, I'm going to give hime an extra-big hug, some for your Dad too.

Great news about the naming for your dad - what a great way to honor such a great man.

I can imagine your face when he told you that, because I probably made the same face myself! I think Batboy X has a certain ring to it, but I'm not sure about Batman...it conjures up visions of black spandex and pointy ears, both of which I am hoping he tends to steer clear from.

Oh that is so awesome of your high school. How wonderful!

tpiglette - LOL, i'd totally forgotten about that. that does make batman a bit harder to handle...

and to everyone who likes "batboy" - it's funny, because i had the same thought myself as a compromise. the problem was that, for me, it immediately conjured an image of the little boys who hang out near the dugout handing the baseball players their bats. however, i may just have let you all convince me. we'll see if the boy can convince me back to batman...

how awesome about your dad- what a way to be remembered!

I think it's endearing he wants to be thought of as a superhero- but I think it should be an original superhero. Batman has been done. Is he proficient with eggs? He could be called The Scrambler.... just a suggestion :) It should be something descriptive of his unique world-saving talents.

The whole point of the Batboy compromise is to make him feel ridiculous by outmaneuvering him, so I'd say the bat boy image is a plus.

That is such an honor about your dad. You must be just truly touched.

By the way so excited to hear you speak at BlogHer. Are the breeders welcome?

Does no one here read the weekly world news? Batboy is TOTALLY the way to go!

I don't know....you did consent to let him pick his own name...if he wants Batman, then let him be Batman.
That IS wonderful news about your dad. What an amazing way to honor a man that sounds incredibly special.

After that comment, I would say The Joker is far more appropriate.

And that's quite a tribute to your dad. What an honor.

I think that's great news about naming the gym after your Dad. Wonderful!

A) Congrats on the dedication to your dad - that's just the coolest!!!

B) Let him have his name. I let Mr. M choose what he wanted to be referenced on my blog. {Granted he thinks the M stands for "Master" - yeah right!}

Oh and Mr. M is a secret ninja (or so he tells me)

That is so wonderful about the gym being named after your father. I can't think of a nicer memorial for him.

I'm way behind catching up on blogs, so maybe it's been decided already. However, I say that anyone who can train bats to say "ribbit" should be called Batman if he wants to be. On the other hand, you might start getting kidnapped by evil villains who think they can use you as bait/ransom/etc. for the real Batman.

The look on your face might have been close to the one on mine when my (now ex) husband told me he believed he had been abducted by aliens as a child - and warned me that they might take our kids to study them next.

Lovely thing about the gym - I'm thrilled for you and your family! Wonderful feeling to know other people appreciated him as you did!

your dad having the new gym named after him makes me proud to have gone to school with you, and for knowing your father (albeit only slightly).
rock on, poppa david.