Well, another year over. I've been reflecting on the past year quite a bit lately, and, well, there's a lot I could say about that. But that would take forever, and most of it would just be depressing. God, thinking back to where I was a year ago... and where I am now... I just don't even want to dwell on that too much. It's hard to believe so much could change in just one year.

With no segue whatsoever, I have decided to create a “Favorites” list in the sidebar. This way, when new readers come visit, they’ll have some options to check out, just in case the most recent post is something lame and poorly written (not that I *ever* write anything lame or poorly written). When Mocha wanted to do this, she asked readers to submit their favorites. I don’t think I have been blogging nearly long enough for any of you to have favorites yet – in fact, I think most of you have been reading less than two months. So instead, for this year, I’ll be choosing my own favorites. If I’m totally wrong, and you have die-hard favorites you want to see included, by all means, speak up. Otherwise, in no particular order, I present The Best of Lara: 2006.

I was reading Her Bad Mother’s blog one day when I read a beautiful post she had written about her daughter, WonderBaby. She wrote about her hopes for WonderBaby’s future – that WonderBaby would grow up happy and secure in herself, without any of Her Bad Mother’s insecurities (particularly about her nose, which is absolutely beautiful, by the way). It got me thinking about my own self-esteem, and the ways in which it has changed over the years.

I was pleased with the reflective quality of this post, and the stark reality of it – for better or worse. Someone once commented to me after reading this that I hadn’t actually answered the question I posed in the title, but I believe I did. My mother tried to teach me to love myself, and did a great job. But in the end, self-esteem can’t be taught – it has to be felt, believed, and internalized.

Maybe someday I’ll get there.

As I said in the post, this one was inspired by a trip to Borders. I was just browsing the Self-Help section – I do that a lot – and came across this title: Letters to My Younger Self. It got me wondering what I would say to a younger me, if I could write myself a letter. The post that came out of it is something in which I take a great deal of pride. There is much wisdom in it, and truth, and that holds as much today as it did when I wrote it.

J. once hypothesized that people don’t comment on my deep, introspective posts because I stump them. He proposed that maybe those types of posts are so reflective that no one knows what to say to them. This post would certainly support that theory – despite the fact that I know this was a favorite post of multiple readers, no one commented on it.

Okay, multiple people have informed me, upon reading this post, that I am crazy. Well, maybe I am. But I crack me up, seriously. This post was inspired by nothing more than the sheer lunacy of my own mind as I sat one day drinking a Dr. Pepper. (And yes, I know the period’s not supposed to be there, but it looks so wrong without it.) Suddenly, the thought occurred to me: Isn’t it odd that the name Pepper would be used twice so famously (once in the drink and once in the Beatles song), but with no apparent connection between the two? It just sort of ballooned from there into the post as it stands now.

What can I say? I amuse myself. 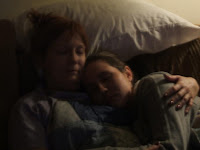 My mom is great. Amazing. Wonderful. And it suddenly occurred to me, on a recent trip to Vegas, that maybe I ought to say so. So I took some pictures and planned out all the ways I could praise her in a photo essay. Mostly, I wanted to try to show the world all the wonder and beauty of my mother. It was a way to thank her – to honor her.

I wrote it and then saved it for multiple days, waiting to post it during peak readership time, so that as many people as possible could see how great my mom is. Once I posted it, I made Mom promise not to read it until I could be with her. My goal was to convey the emotion well enough to bring tears to her eyes. She read it as soon as I got to Vegas for Christmas. She sobbed. I was pleased.

This was an assignment for one of my teaching classes over the summer. We had to choose a significant incident from our adolescence and develop it into a narrative. The point was to practice the writing process, specifically with regards to personal anecdotes, and to work on using sensory details to engage readers more with our writing. For me, I learned how tough it can be to write something so personal once I decide to try to make the readers feel it along with me. From my reflection on the assignment:

“To produce a narrative that will connect with my readers on a personal level, I must completely understand the emotions that accompanied the event for me – in essence, I must re-experience those feelings. Once I placed myself in that position again, I began to experience the same emotions, which is useful as an author, but difficult for me, personally speaking. I found myself crying as I wrote, simply because I had successfully called forth emotions long since forgotten. Without recalling those feelings, however, I could not have known how to best express them, and my readers, therefore, could not have seen the event I was describing as anything more than a dry narration.”

It took many hours to write my narrative, and I cried for most of that time. I cried over every word, every memory. And in the end, I was damn proud of what I had created, especially when it brought multiple people to tears when reading it. As a writer, that is a great compliment. 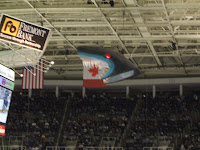 This post recapped the hilarity of a professional hockey game. I’m generally a fan of hockey games, so it probably would have been fun for me no matter what, but this particular game just had so many random extra amusements that I felt compelled to share them with the readers. Things like tricycle races exploiting the nation’s youth. Or Zamboni machines masquerading as ice monsters.

Mostly, though, I love this post solely for this one line: “…just staring at that shark, going after Canada like it was deep fried and smothered in baby seal.”

I’m still laughing over that.

And finally, the most significant to me personally:

I don’t think there’s much to say about this one. For any readers who don’t know already, I was hospitalized for a week in November and treated for major depression. While dealing with the aftermath of that, I wrote a seven-part series about my experiences. The posts range from serious reflections on the emotional turmoil to ridiculous mockery and dark humor.

I wrote them to help myself heal. I needed to write about what I’d been through. But more importantly, I needed to share it with others. For myself, I needed it.

As time went on, however, I realized that my words might possibly help others. Maybe someone else could find hope or inspiration from my experiences. Maybe someone already has.

I was proud of what I was able to accomplish – pleased with what the pain could become when I put it into words. Others were proud too – my dear friend Lady M awarded me a November Perfect Post for the series.

So those are my favorites. Do you have any that I missed? Don’t be shy – raise your hand!

And sadly, we have the final day of a month of shoes…

Oh, we're going out with a bang here, folks. Okay, so the lace heels may be my sexiest shoes, but that doesn't mean I don't have other sexy shoes. To close out the year, I give you two ultra-sexy pairs of heels. 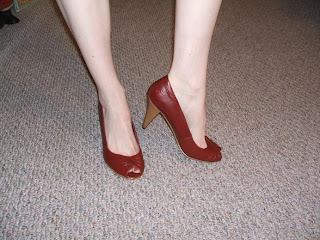 Bought these Day-After-Christmas, and boy howdy! they're hot. And surprisingly comfortable. They have a bit of peep-toe, but it's small enough that there really isn't much toe that peeps out. I love the richness of the color, especially contrasting with the wooden heel, and the little bit of texture with the lines along the sides and front. These look good like this (with skirts or dresses) or under long pants. My first pair of red heels. Sexy, sexy red heels. 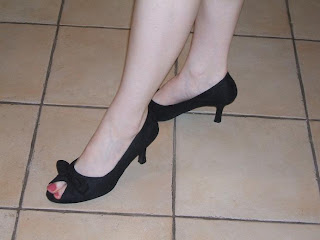 These are sultry suede, with a sexy (not cute!) bow across the front. They're simple, and classy, and oh-so sexy, especially when paired with my mock-fedora. To give the proper perspective for these shoes, I've posed them - where else? - in front of the fireplace: 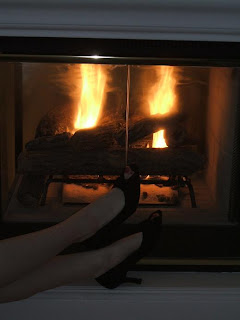 You all can imagine the rest of the outfit I'm wearing, if you'd like...

And with that, sadly, we bring Lara's Blogging Shoe Month to a close. For next month, Sassy Student and I will be doing a book a day. Since it was her idea, I've dubbed it SaBloBoMo. Yes, she came up with the idea and I still decided on the name - I'm so bossy. :-P Hope you all keep reading!

i meant to TELL you that i went to the store to look for those lace covered heels because i had seen them, passed them up, and then regretted that as soon as you posted them, and they were ALL GONE.

yay for book month! you are bossy. but i love you, nonetheless.

"Who teaches me to love myself?" got me to thinking about the important lessons my mother has been trying to teach me and my siblings our whole lives. However, she's been trying to teach me to love others... be giving, live for others, and not think of oneself as so important. Sounds contrary to loving oneself, but I see how it works for my mom. No hardship has ever gotten her down, and she doesn't suffer as much as people like me who think and worry about themselves too much and aren't naturally quite as selfless. I guess being a selfless and giving person can't be taught either, and I'm hoping someday I'll get there too.

I loved getting to know you, and look forward to much more stalkerage in 06. Sassy, too. Watch out, girls.

also, did you get those at target? are they isaac? i own them in purple, i am pretty sure.

can't wait for the first book!

aly - oh, the stalkerage ante has totally been upped since AIM entered into the picture. 2007's going to be awesome. just you watch - sassy and i will manage to convince you to come to the states one of these days... ;)

sassy - the red ones are from target, but i don't actually remember if the black ones are target or payless. sorry!

OK, your review of your article about me also made me sob...in a very good way. The shoe with the black bow reminded me that I forgot to show you my shoes, black satin T-strap, open-toed, closed back, bow with rhinestone center and smaller rhinestones up the T, 31/2" heel. Next trip.