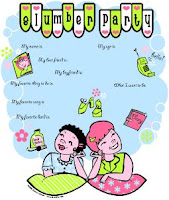 Tpiggy is spending the night with me, my first night in my new apartment. We've been having a good time so far, doing some unpacking, chatting, watching TV, and generally being silly. As a fun - and common - slumber party game, we decided to write a story, one line at a time. We traded the computer back and forth, each writing a sentence of a story. Here is the story we came up with:

Once upon a time, there was a penguin named George. George had a big family. This is because he and his wife like to… you know… a lot. They all have names that begin with G. Like , and Georgette, and George… Jr. Their feet get cold from walking on ice all the time, so they all like wearing shoes. But one day, George realized that shoes looked silly on them – since they’re penguins – so they should find another solution to their cold feet. Instead of waddling, they would jump and hop! Sadly, George and the other penguins did not understand the laws of physics so well. They realized they could get around much more efficiently by skating around on their stomachs. This was a hot and sexy look for them, so suddenly George and all his fellow penguins were highly sought after for exciting parties and get-togethers. They were even asked to put on skating performances! Then suddenly, in the middle of one of their performances, George started clucking like a crazy chicken! Everyone was confused at first, but they figured that since George came up with a great idea like stomach-skating, clucking like a chicken must also be the cool thing to do. Within weeks, the whole world was clucking like a chicken and skating on their stomachs, and George and his family basked happily forever in the adoration of millions.

Good story, huh? Well, we were laughing a lot, so if you weren't, too bad. :-P Tomorrow I'll talk about all the junk food we bought.

It’s time for a new monthly tag! LaBloShoeMo was a blast, and it’s nice having a standardized end to my posts, especially when I need to be cheered after a rough post. So for January, Sassy came up with the Book-a-Day idea, and I have dubbed it Sassy’s Blogging Book Month, or SaBloBoMo. Enjoy the bloggy goodness of 31 days of books, and the new bling of another button in my sidebar. Without further ado, I present to you… 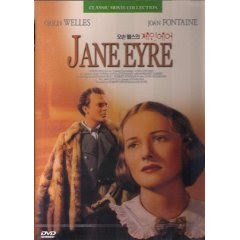 This is my favorite book of all time, and thus deserves the rightful place at the top of the list (though I warn you now that the rest of the month won’t be in any particular order). I first read it as a sophomore in high school, and I believe it was the only book of that entire year that I finished. I fell in love with the troubled Mr. Rochester, and I admired Jane’s quiet strength in spite of adversity. This book has it all – romance, tragedy, mystery. I often enjoy picking it up, opening to a random place, and just reading for a while. The 1944 film version with Orson Welles (picture above) is also my favorite movie of all time. For my final paper in “Novels Into Film” – a seminar I took senior year of college – I analyzed that particular adaptation of the novel, and talked about the significant changes made to Jane’s character. But despite the differences, they’re both great, and highly recommended.

thanks to you, i know how to pronounce Eyre. perhaps i can consider my education complete?

looking forward to all these days of books. brilliant. almost more exciting than shoes.

sorry for pestering you on aim. my sleep schedule is all wacked out and since you are up... sorry!!

I'm glad you are moving in with a friend. That's always a good thing.

Your story cracked me up. Any story about penguins is fabulous!

I like Jane Eyre. But I'll always remember the horrible English class that went with it (icky, icky teacher) so that sort of spoils it.

Shoe blogging was all well and good but book blogging... now there's something I can really get behind. I may even do one of those for myself. Probably not this month, but thanks for the idea :-)

I like Jane Eyre too, but it's not my all time favorite. I think that would have to be a draw between Pride and Prejudice, The Lion, the Witch and the Wardrobe, and The Lord of the Rings (and yes, I'm counting it as one book, so sue me). I'll look forward to reading your other book posts.

sassy - hooray for books! never apologize for pestering me on AIM - i like the company! :)

aly - i'm glad you liked the story! it was fun to write. and sorry about the horrible english class that ruined the novel. maybe you should try it again?

graham - you are most welcome for the idea, but it was really sassy's, not mine. i was just the first on the bandwagon.

CL - i thought you might enjoy the book blogging month. P&P will be showing up later in the month, but i've never read either of the others, so they won't.