A Socal Girl No More

I’ve lived in the Bay Area for a whopping six years now – that’s right, it was almost exactly six years ago that I moved into Muwekma 315 (316? I don’t remember…) and became a college student. Through all four years of my undergraduate career, however, I continued to consider myself a Socal person. For those of you who don’t live in , understand that the distinction between Socal and Norcal is a crucial one, not to be taken lightly. You are one or the other – you are never both. Socal people are shallow and materialistic; Norcal people are crazy hippies. All you can really do is pick a side and embrace the insanity. I decided to stick with my roots and remain a Socal person, despite my physical location.

Even after turning down the opportunity to return to Socal for law school, renting a semi-permanent living space here, and getting a job in the area, I still identified primarily with Socal. People would ask, “Where are you from?” and I would say, “I’m from Socal, but I’ve lived here for about four years.” Soon it became five years, and now it’s six. But yes, despite the six years, I continue to say I’m from Socal. I never say I’m from the Bay Area, even when I’m elsewhere (like Vegas, for example) – if asked, I say, “I’m from Socal, but I’ve lived in the Bay Area for about six years.” What can I say? I’m a Socal girl at heart. At least, I was. That may all be about to change, however…

I don’t just mean I’ve started riding it occasionally, when I need to get to the city for some reason. I mean I have a commuter pass and ride every day to and from work. Can you believe it? Me, a Socal native, using public transportation. I don’t think I even knew what those words meant until I came here for school. I mean, sure, I’d heard of public transportation, but it was something only New Yorkers really used, and for all I knew they were just making that subway crap up (everyone knows New Yorkers are desperate for attention (sorry Mom101)). But now, here I am, regularly using public transportation as a means of, well, transportation. I’m not sure how to handle such a drastic identity shift.

I am learning some interesting lessons from taking the train, though. For one thing, people do some crazy things when they’re bored. A few days ago, a girl sitting across the aisle from me (on the second level, by the way) was breathing on the window and writing “Hi” with her fingers. Even stranger was that she was writing it backwards, as if intending it to be read from the outside. Who, I’d like to know, is going to be reading the second-story window of a passing express train? To top it off, she kissed her palm and stuck it to the window, perhaps in the hopes of snagging a date with any 15-feet-tall sprinters running alongside the train on the off-chance they could find an insipid message drawn onto the window by some desperate female. She should have written her phone number, too.

People are also extremely willing to tell you their life stories once you’re trapped in an enclosed space with them. Did you know that there’s a place called ? I didn’t either, before yesterday, but now I do, as well as the best restaurant in Loup City if you’ve a hankering for ribs (Chubby’s), how to tell the difference between homemade lemonade and store-bought (it’s all a matter of how sweet/sour it is), and where Lily McFee had her first kiss (and probably some other firsts, but I didn’t want to hear details). Did I really need to know all this? No, probably not. Did I want to know all this? Um, no, not really. But for some reason, once that train starts moving, people want to tell me. And I’m just too nice to tell them to shove off.

Apparently there’s also something very soothing about Caltrain that lulls people to sleep. And then they snore. Loudly.

Last week (and most weeks in the future), I was taking the train at 7:30am. There were some people there, but not a ton, so seating was easy. This week, however, I’ve been taking it at 8:30. There are WAY more people taking the train at 8:30 than at 7:30. Like, about four times as many. I think this has driven home to me, once again, that I chose the wrong career given how much I hate early mornings. Other people get to go to work later, but no, I have to be there at 7:45am. Ah well, I would have had to adjust when I became a mom anyway, right? Boy, I’m really looking forward to those screaming, crying, ass-crack of dawn wake-up calls. Really – I can’t wait.

I also learned quickly that sound travels really well in a Caltrain car. Besides all the information I learned from being directly assailed with other peoples’ life stories, you wouldn’t even believe everything I’ve learned from overhearing people at the other end of the car. For example, today I learned what an a-hole Jimmy is for ditching Charlotte at the party last weekend when he knows that her parents are getting a divorce and she’s just been trying to deal with that so it’s not her fault that she’s a little moodier than normal and just because she’s not as pretty as Lisa doesn’t mean she deserves to be totally humiliated like that in front of her ex-boyfriend who was at that same party showing off his new arm candy even though he totally wasn’t invited because Jeannie knew that Charlotte wouldn’t want to see him anyway. Can you believe it? That Jimmy can be a real jerk, let me tell you.

I think the most important thing I’ve learned, however, is that Caltrain has its priorities all screwed up. I saw this sign today, and it bothered me a bit: 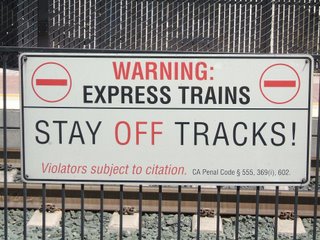 I’m sorry, “Violators subject to citation”? If you’re standing on the tracks when an express train comes by, don’t you think you have bigger consequences to worry about than a citation? “I was just standing there on the tracks, minding my own business, and then this express train came by real fast, and as I was being dragged under the wheels, I was like, Damnit, here comes another citation…”
Posted by Lara at 4:40 PM

I used to take Caltrain up to the city daily for work and was introduced to the jaded/disconnected "commute" face from the financial district city folk. It was very amusing - barely a raised eyebrow and nod for acknowledgement, no conversation. Further south, there was more talking.

Funny that you've picked up the Caltrain commute just as K and I have left it. The best was going home to the city when there's a Giants game. The car is packed but it's half jaded commuters trying to get home (as Lady M mentioned) and half enthusiastic and partially-drunk-already Giants fans.

Hilarous post. I, too, find much amusement on the Caltrain. Check out the Sat night midnight train from SF. Once I observed two fellows trade a bottle of rum for a bottle of water. The guy getting the water downed the bottle in one sustained convulsion of his throat. Apparently he had a mighty thirst.

To be fair to the Caltrain sign, one can be cited for walking on the tracks even when there are no trains present. Express trains move faster than the inexperienced p.t. user might believe: take the case of unwary p.t. user Ishmael who, bereft of the benefits of a warning /citation sign (I imagine), carefully looks left, right, and seeing nothing, not even on the horizon, with malicious glee places the toe of his shoe tentatively on the track and WHAM: just then, an express train appears essentially on top of his foot like a Klingon warship decloaking.

lady m - thanks! yeah, there are definitely occasional jaded faces, but the majority of my fellow passengers happen to be of the chatty variety. :-P

tali - giants suck. i don't think i could have handled having to be on a train full of people stupid enough to support the giants. they're almost as bad as yankee fans...

anon - i think the saturday midnight ride would be too terrifying for me, thankyouverymuch. i can just imagine the crazies aboard that particular train. and wow, that story scared the crap out of me. i think i might write a thank you letter to caltrain for caring enough to put up the sign... ;)

It's true! We are totally desperate for attention. But we usually do it by quoting arcane Dostoyevsky quotes during lulls in conversation at brunch, as opposed to using E-cup sized silicon bags.

(and good luck with that commute.)

Socal vs Norcal
I recently asked this girl where she was from and she said, "Definitely not from Socal." She said it with so much disgust. I was a little shocked. I asked her what's so wrong with Socal ppl. I didn't get too much of an answer. All I got was that Socals are bad drivers. I think that is just Los Angeles. The thing that bothered me was she spoke with so much hatred towards Socal ppl. It was like we're Jews and she's freakin Hilter. What is wrong with Norcal ppl? They need to learn to take it easy.