How I Got My Name(s)

Before I get to the story (well, stories) of how I got my names (both real and blog), two things:

1. Boy, nothing gets a conversation going like Facebook. Seriously, way to jump in and discuss, guys! I love hearing from you, so if that means I have to give shout-outs to random social networking sites every so often, I'll do it gladly. Also? Boxer-briefs are apparently very popular with the ladies. Keep that in mind, gents...

2. I just spent 10 straight minutes searching for a phantom smell in the living room. I thought maybe one of the cats had left "something" for us to find, but that wasn't quite what the small was. "Is something molding?" I thought. I got down on my hands and knees only to eventually discover... that's right, it was me. Hey, how good would you smell after three hours of fast-paced dancing, aerials, and conditioning? Yes, I'm going to shower as soon as I finish this.

Okay, on to the point of today's post. For those of you who didn't click this link, wherein I explain why I chose a nom de blog and allude to why I chose the one I did, I'll summarize. At the time, I was student teaching at a local high school as part of my Master's program at Stanford, and blogging under my real name. While I wouldn't necessarily have gone out of my way to share such personal info with my students, I didn't personally feel it was something I would hide from them if they asked (I later decided it was probably better to hide the deeper parts of my problems as much as possible). Because of that, I didn't think it was a bad thing to blog under my full name. My principal, however, found it and was VERY unhappy. She told me to take it down or leave the school.

You should've seen me FREAK OUT.

Seriously, at that time (we're talking only weeks after my hospital stay), blogging was my lifeline. If it had been taken from me, I don't know how I could have survived. If the choice literally would have come down to "Stop blogging or quit this program," I think I would have quit. Fortunately, we were able to compromise on my changing my name, taking the main page off the Google search index, and taking down all pictures of me for a while. It actually took a long time for it to get to a point where you could search my real name and not come up with the blog, but it's true now. Of course, it's still pretty easy to find it, but I'm also not teaching anymore, so it's a moot point.

Anyway, I changed my name. I wanted a name that was still meaningful to me, though, so I named myself after my dad. His first name was David (which he actually never went by, so I don't even think of that as his name very often), and his middle name was Lawrence, but he went by Larry. So Larry --> Lara, and David for a last name. I felt good choosing a name that mattered to me. 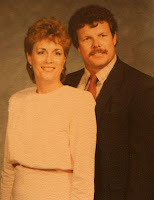 My parents, circa Long Ago.So that's the explanation for the pen name, but what about my real name? I'm still not going to come right out and say what my real name is, even though, as I've said, precautions are kind of unnecessary now and it'd be really easy to find me anyway. Call me weird, I don't mind. However, that said, I'm still going to tell you the story of how my parents chose my real name.

I have one of those names that is relatively common, but has a lot of different spelling options. People often ask why it's spelled the way it is, and, unlike most people who can only say, "I don't know, that's just how my parents spelled it," I actually have a reason.

Seeser (my sister - if you haven't figured that much out, you haven't been paying very close attention) is three years older than I am. Her name originally came out of a baby book, even though it's a very uncommon name. Mom and Dad liked the name, and dubbed my sister thusly when she was born. And then, my father, a lover of all word games and puzzles, came up with this brilliant observation:

And hence, my name was born.

Yes, that's right, my sister's and my names are an anagram of my parents' names: If you take my father's name (Larry, remember?) and my mother's name (another five-letter) name, and mix up the ten letters, you get the six letters of my sister's name and the four letters of mine. My name? Comes from the leftover letters.

Okay, not really. It's not like I have a horrible name like Fhqwgds or something (any SB fans out there?). I'm sure they wouldn't have done the anagram if it hadn't made a legitimate name. It just happened to turn out that they got two good names out of it, so they did it.

Plus? It's a cute story to tell when people ask about my name.

So, how did your parents choose your name? Are you named after someone? Or did it just "sound nice" when they put it with their last name?
Posted by Lara at 11:18 PM

Now I'm totally sitting here trying to work out Seeser's name. Does that make me weird? Does it start with a D? If so, I think I got it!

My name was a mixture. Dad wanted Alyssa and Mum wanted Belinda. They jumbled it as a joke, and "Alynda" stuck.

I always thought Lara David was your real name *blushing*

It is a cute story =) My name's main attributes were that it was popular in Israel but easily pronounceable in English (thanks Mom and Dad!!!)

My English name isn't my birth name. Before immigrating to the U.S., I had a Southeast Asian name that my U.S. friends could not possibly be expected to pronounce properly.

My parents pulled out the Bestselling Book of Boring Baby Names -- the sequel to Four Hundred More Forgettable First Names, itself the sequel to Appellations Aplenty -- and randomly chose an entry. Yay.

A.s' friend M. was in Germany for six months, and she wanted to send A. a note and a little gift. She looked at all the local Deutschhallmarks for a cute card and a cute stuffed animal, but couldn't find anything. On her way home, she came across me! I was leaning against the wall of a pension -- I think it was the Pension Grillparzer -- and holding a sign reading Americapleazanquick. (How I ended up leaning against that particular pension and why I was holding that particular sign is a story for another comment.) M. asked if I would mind going postage, I said yes, and two days later I found myself squished into a padded envelope (apparently M. though I said "no" to her intitial question), flying to the US. When A. opened the envelope, he gasped, "Franz!" I looked around, didn't see anyone else by that name, and as the name was a bit sticky and so had fastened itself to my fur, I figured I was stuck with it. So Franz it was. Later I asked A. why he had so quickly named me Franz. He said his great grandfather had known the Kafka family before the war and that he (A.) liked Franz Kafka's books, and those two combined with my origins recommended the name.

My sister was name after a type of wheat my mum studied in agronomy at uni "Teletia", although my folks tweaked the spelling a bit so people wouldn't pronounce it "tell-e-tee-ah".

My name here I assume comes from the fact Lara thought I was a backward yob from Australia.

Ok, I thought that last comment noting that "yob" is just "boy" backwards was kinda clever on my part. However trivia fact for the day is that the word "yob" simply originated as the term for "boy" in back-slang (where words are just spoken in reverse and vowels are added if required).

So the moral to the story is: Wikipedia is tops, and I'm not as smart as I thought I was.

(In reality I'm just named after my great grandfather who, hopefully coincidentally, kinda looked like an ape.)

That is very clever!

I am named after both my grandmothers (one had the same middle name as the other's first name). My parents spelled it differently -- unclear why. But I like "MY" way better.

When my biological was pregnant with me, she wanted to name her baby - boy OR girl - Clancy. We are pretty much 100% Scots down both sides of the family tree, and the maternal biologic thought it was a good name.

The paternal biologic, however, was having none of it. When I was born, they were still putting women under as a matter of practice, and the nurse came in looking for a name to put in the records before the maternal was fully awake. Paternal named me - simple spelling and all.

I didn't like my name until about ten years ago. I'm okay with it now.

I am named after both my great grandfather and my father. Both of them have the middle name Dee. My parents added a little something to that and came up with my name. However, I've spent most of my life being called Dee anyway. It will also be passed down in some form to my baby.

I'm now dying to know your real name even though I think I might have known it at some point.

Supposedly I was not named after her - but my dad had an old girlfriend named BetteJo and he liked the name. He also liked overbites but I still got rid of mine! Why my Mom agreed to it knowing where it came from, I will never know.
I do like it though, because when someone calls out my name - I know who they're talking to. On the other hand, people's tendency to shorten it to Bette annoys the crap outa me.

I'm named for a dead relative. In the Easter European Jewish tradition, whichever great aunt or whatever most recently deceased served as the inspiration or THE name of the next baby born. Thus it was for my twin, who is named for my dad's g aunt, and for me, who was named for my paternal grandfather. What I have just found out is that my grandfather's name - Petrus - was the name for 5 generations of first-born boys. My mother ended that line, but I was named what my grandmother, who hated the name Petrus, called her husband.
When it came time to name my daughters, I chose names I liked, and although my MIL didn't speak to us for months because we hadn't named our child for her father, we chose a name we liked for our second daughter, too. Both of our girls went days before we came up with their names; we wanted to get to know them a little before we named them.

But in 5th grade or so, I changed my last name to my mom's maiden name. hurrah! so there you have it.

What a bizarre story! Mine is boring -- my mom picked my older brother's name so my dad got to pick mine. And he just picked it because he liked it. Fascinating stuff, huh?