What's in a Name?

Some of you may have noticed this blog has had some big changes over the past couple of days. Others of you may not have noticed, because the changes – while significant in their way – may not be obvious enough to be seen by everyone. If you look to the right, you’ll see my name.

It is now. I’ve been having a lot of very not-so-fun conversations over the past few days about my blog. Basically, some people have expressed serious concerns about how easy it is to find my blog by searching for my name. Said concerns are generally based on fears of how my students and/or their parents would react to my blog if they were to find it.

At first, the people expressing these concerns wanted me to just take down the blog entirely. If you know me at all – if you’ve been paying any attention to what I’ve been saying here about the importance of this blog – then you know how huge a deal that was to me. I didn’t handle that request well at all.

In the hopes of reaching a compromise, we’re attempting to anonymify (oh, you like that word I just totally made up?) the blog – make it more difficult to connect to me. Of course, there are still logistical and technical issues with this, but hopefully it will work itself out. I don’t think I could take the blog down, no matter what the consequences of leaving it up. I need it too much, insane though that might seem to some of you.

So you’ll see that my name looks a bit different these days. I chose this name for a reason, and those of you who have paid any attention when I’ve spoken about my father can pretty easily figure out that reason. Plus, it’s a pretty name, no? I’ve gone back through and edited the name throughout the blog. I’ll also be going back and changing some other easily identifiable things over the next few weeks, including pictures – sadly, I think no more pictures showing faces (which is why I changed my profile pic, too).

*Sigh* This whole thing is extremely annoying, and a bit disheartening, too. I wish I could just speak my peace (yes, that was intentional) without being judged for it. On the one hand, I can understand the concern – it’s heavy material. But on the other hand, not talking about this kind of stuff isn’t going to mean the kids won’t have to deal with it. Hell, when I first started cutting, I had no idea what cutting even was – I thought I was a freak, and I spent a lot of time trying to figure out what was wrong with me and why I was doing something so crazy. If I had known someone to talk to about it, I probably would have had an easier time of it. And the insinuation that cutting is contagious?! That’s just insulting. You’re afraid my students are going to catch cutting from me? Right, and the teachers who are gay are going to give their students a bad case of homosexuality, too.

At any rate, as I keep trying to remind myself, it’s just a name, right? This whole idea of changing one’s name and how that relates to changing one’s identity is something I’ve considered before. A childhood friend of mine, Lilit, has changed her name a few different times. I always assumed it was mostly for her writing, but I guess I’ve never directly asked her. But I have wondered, at times, how changing her name might or might not have effected (or maybe responded to) a change in her identity. For myself, I’ve taken a pseudonym, but I’m still the same person.

In the hopes of cheering myself up a bit, we have Day 3 of LaBloShoeMo: The Imitation Converse. 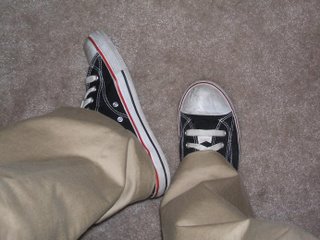 I realize these shoes are probably “too young” for me, but I like them, in part for just that reason. They remind me of being a wannabe punk in high school, and they’re comfy and casual. I admit I have worn these to teach before, but I’m fairly certain they’ve never caused any of my students to think less of me. In fact, on a couple occasions, I think it actually made them like me even more.

Oh, and also? They’re from Payless. As if I had to mention that. 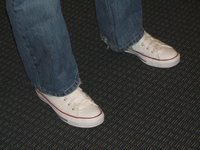 [Edited to add: A university colleague doing his student teaching at the same school as I am was wearing these Chucks yesterday, and I just had to snap a picture. Apparently I'm not so weird after all...]
Posted by Lara at 2:57 PM

Oh, good. I get to be first for once. I think this is beautiful. And I'm glad you found a way to do what you love. You are still you and you are beautiful.

I totally get the need/desire to change one's name, veil oneself... totally.

And? The sneakers? Not too young, gah. I have laceless Chucks - totally punk rock - and I'm hitting middle thirties!

oh, no, dear. you are never too young for chuck taylors.

although, chucks are one area in which i refuse to buy knock-offs. though you are allowed to. ;-)

Dude, hot kicks man. So are the first time I make a comment on any blog ever, I feel the need to make this memorable, but perhaps I will just ramble. You should get the totally 80s colored laces for those. Your kids would totally love it. I hear the laceless idea is in fashion if you run in the rough crowd, with your baggy pant legs tucked between the tongue (which is stuck out of the shoe) and your ankle. Weird, I know, but who am I to criticize fashion.
- The Girlfriend

I did see the name and picture change, and can understand the reasoning behind it. My kids are different in that they are younger, but if I were teaching older students, I think I'd reconsider my open-ness as well.

My principal recently found out about my blog and wants to read it, of course that freaks me out. But several colleagues have read it and it's not that I would change the content, rather that he is my BOSS, so I'd always feel uncomfortable if he did somehow come across it.

That being said though, he obviously hasn't tried hard to find me, seeing as my completely weird name links to me when googled. Hmm.

Long comment short, I like your fake Chucks. I think I'll pop mine up sometime this month. Good times, dear!

No one is too young for converse!!!

Or I guess, "chucks"- though they've always been called converse to me.

I came over through the hbm basement, by the way.

Can I call you Lara Croft now?

Pseudonyms aren't all that bad, honey. They can be nice actually, the chance to play around with words and names...to express who you are or to create the persona you'd like to project to the world.

Good luck with your new name and blog outlook! Yes, it sucks that teachers should be held to such ridiculous standards, be MORE than perfect. But it is what it is, unfortunately...find a way to make it work for you if you can.

The second big reason I started my blog was to gain the anonymity that my online journal was lacking (the first one was to make a clean break from the emo/personal style). I still need to crop the one picture of myself that I posted so that my face doesn't show.

The kids, they are very interested in their teachers, so we do have to be careful. The kids in the class where I was tutoring asked me for my MySpace code. I didn't give it to them, and luckily none of them can remember my name, so I think I'm safe for the moment. The page is squeaky clean, though, so I don't think its discovery would do me any harm.

I have a 40-something (teacher!) neighbour who wears Converse when she's at home. She's not too old for the shoes, she's just funky!

Too bad about the controversy. How did the administration find out about it? So far (after a year and a half) I've managed to keep mine anonymous and invisible to those I wouldn't want to see it, but I always worry just a little. So - how were you discovered?

*note to all: the post has been edited for another shoe picture...*

mom - congrats on being first! and thanks for the compliments, as always.

HBM - oooh, laceless chucks? i could totally see you in those, kicking ass all up and down the avenue. you go girl! :-P

sassy - um... do you mean never too *old* for chuck taylors? 'cause that would make more sense... and thanks for the permission to buy knock-offs. i would have felt awful otherwise.

charcoal - HA! i KNEW i'd given you a name and couldn't remember it! but now i remember! charcoal! okay, i'm over it, really. rambling is totally okay on my blog - anytime. colored laces, huh? neon orange, maybe? i like this plan...

aly - yeah, my principal is the main one who found it and didn't like it. also, i'm looking forward to the fake chucks. did you also get permission from sassy to buy knock-offs?

krista - again i say, you mean too *old*? and right on, sista - i totally call them converse. in fact, though i'm a bit ashamed to admit it, i didn't know what "chucks" were until yesterday... :-P thanks for linking over from the basement, and thanks for leaving me some comment love. :)

CL - no, you can not. but thank you for asking. and yeah, that's what i'm trying to do - have fun with it, think of it kind of like a cool game. the people who want to get to know me can. aly and i, for example, now exchange fun emails from halfway across the world! :)

teacher anonymous - fortunately, i don't have a myspace account, nor a facebook account, so those aren't problems. i do know they're curious, which is why i can kind of understand. still sort of frustrating, though.

mary p. - funky neighbors are cool. i'm pretty sure my principal just found me through a google search. wasn't too hard - my name was on the blog, after all. which is why it was such a problem, because it was SO easy to find.