Sick Kitties and a Shoe Update

Bertie - the kitten we've been fostering - is sick. And when I say 'sick,' I don't just mean that he's been throwing up little hairballs. I mean he's in the kitty hospital. He hasn't been eating for days, and despite x-rays and an enema since he went to the doctor yesterday, he hasn't been eating for them either. He's been lethargic and low-energy, and when anyone offers him food, he turns away as if it makes him nauseated just smelling it.

Our poor baby is sick, and it makes me sad. Look at the cuteness - doesn't thinking of him feeling sick make you sad too? 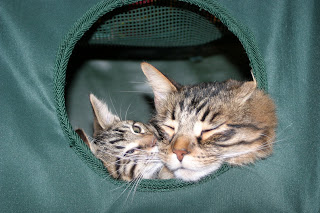 "Sharing" Tenny's space (which maybe Tenny didn't like so much).

I miss him already, and honestly, I think Nora and Tenny do too. Here's hoping he gets well soon.

On a cheerier note - because let's not focus on the bad, k? - I'm glad to hear that many of you want to join me in LaBloShoeMo 2007! Answering the FAQ: No, you don't have to post every day of the month. You could pick one day of the week and post four (or five) times during the month. You could do a brief add-on at the end of every post you do write, however often that may be. Or you could just do one post anytime in the month of December and be a one-time participant. Whatever makes you happiest.

To make LaBloShoeMo that much more awesome, I've made cute little buttons for you to put up if you want to fully commit yourself to the shoe movement. I'm not sure which one I like better, so feel free to take both or just pick your favorite:

The shoe lovin' begins on Saturday. Let the blogosphere rejoice!
Posted by Lara at 10:39 PM

Oh, I hope your kitty recovers! They do creep into one's heart, don't they? I keep thinking it's time to get another one, but our youngest is too jealous, she'll make his life a misery.

I'm vibing for the kitten. It sucks when they're sick...

I have a sick kitty too, not hospitalized but she has pretty bad allergies. It's horrible, I've been taking her into the vet for a year. It's crazy. So I can definitely relate! Hope the kitty gets better.

Hmm, if I come over Saturday to take shoe pictures, maybe I'll bring some shoes of my own ... :)

I love that 2nd photo Bertie and Jitta have almost the same color eyes. I hope he feels better soon.

awwwww that baby is so cute

off-topic of your blog, but i just wanted to say that i've been reading as of late. you're an amazing writer. thank you for your blog.
-one of your HS freshman year bio lab partners.

heather - thanks, kid! glad to know that you've been reading and enjoying; i always enjoy new fans. ;)

He's too adorable! I hope he gets better soon!