You can pour your heart out singing a song you believe in
That tomorrow they'll forget you ever sang
Sing it anyway.

That was how I felt a lot of the time – like my voice had been stolen. Like the flights I had taken and the heights I could have reached had been taken from me. Like life and circumstances and, yes, even sometimes people had beaten me down and taken my song. I was a songbird, and my singing was silenced, and my wings were broken.

It was pathetic and disgusting.

But even so, it was the truth of how I felt at the time. I feel it less now. I had realized for a while that my thoughts had been changing, but I hadn’t come up with a good parallel for that song and the way it had reached out to me back then. But in the car recently, I heard a song that I’ve known for years, but had forgotten about - it seems more fitting for the here and now. Quoth Martina McBride:

Yes, my wings have been broken. And maybe I won’t reach the top of the world – the places I could have gone, if I’d done things differently – but that doesn’t mean I can’t fly at all. And maybe my song is different – sadder, softer, just a little more real – but that doesn’t mean it’s gone forever. The world is still large and full of possibilities – things I cannot even consider now. My life is still precious, and open before me, and sometimes I feel ready to embrace that.

Day 7 of SaBloBoMo: The Lovely Bones by Alice Sebold 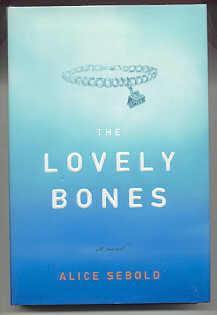 I heard about this book sort of idly through side conversation in a class one day, and it sounded so interesting that I just had to go find it. I rarely buy general fiction without knowing anything about the book, but I bought this one and never regretted it (well, okay, I regretted buying the hardcover version instead of waiting for the paperback, but that's different).

The Lovely Bones is written from the perspective of Susie, a young girl who has been raped and murdered; from Heaven, she watches her family and friends as they struggle to make sense of their loss and find her murderer. It successfully balances Susie's challenging adjustment to her new life (or lack thereof) with her family's dramatic changes as they search for meaning in the absence of sense. It is beautifully written, and heartbreaking in its poignancy.
Posted by Lara at 10:29 PM

Your post really made me think about how many songs with bird themes I love....

And Moonbeams and fairy tales.

That's all she ever thinks about.

Riding with the wind.

When I'm sad, she comes to me,

With a thousand smiles she gives to me free.

Take anything you want from me,

Wow. Sorry about the crap formatting on my comment.

I've always loved that Martina McBride song. Now it will be stuck in my head all day!

I read The Lovely Bones right before I began my student teaching assignment. My cooperating teacher recommended it to me and let me borrow it, citing it as one of her recent favorites. I read it with the belief that, were I to enjoy it as much as she, we would spend sixteen weeks of glorious time together, working as a team and enriching the lives of our students. My career would be off to a fabulous start.

Well, I loved it. And despite a few rough patches (primarily when, y'know, she STOLE MY LESSON IN FRONT OF MY STUDENTS, but, nah, I am not still bitter), we made a wonderful team and did have a good time together, one that benefited our students more than anyone. And, really, isn't that the important thing?

(If there was an award given out for Most Verbose Commenter, I'm fairly confident that I would be the absolute, hands-down winner.)

Lovely Bones was indeed a good read. Not exactly uplifting, but perhaps not quite as totally spirit crushing as a Joyce Carol Oats tome. I believe it was We Were the Mulvaneys that had me ready to call it a day. Yeesh. Did you ever go and get the Larry Miller book?

I was supposed to read Lovely Bones for book club and never got around to it. Now I have the Great Book List of 2007 and I'm not sure I'll ever get back to it this year. Oh well. There's always 2008.

lala - i don't know the first two, but i do love "blackbird" quite a bit. :) and no worries about the formatting - it happens.

teacher jane - yep, great book. she STOLE your LESSON?! that's a whole lot of not awesome.

amanda - no, not yet, but then school is starting up, so there's very little i'm doing these days besides school, work, and blogging. if i can add anything, it'll be sleep. :-P

bethiclaus - replace "catcher in the rye" and "great gatsby" with "lovely bones." 'cause both those books are awful, and "lovely bones" is great. so speaks the expert. :)

I am so very glad to read about your changes. You may still have broken wings but "broken" will heal and I believe you are taking care of yourself to help the healing process along. I love you.

mom - you bring up a good point: "broken will heal." i'm taking the steps. they're baby steps sometimes, but they are steps. and i love you too. :)