Okay, let's start with the ants. So, I'm convinced that somewhere in or around my house, there is a colony of ants all just sitting around thinking of ways to screw with my mind. Last weekend, I was sitting in bed, watching TV or something, and I saw an ant on my comforter. Just one, but still, I was not pleased. I grabbed a tissue, squashed the ant, then stood up to throw it away. I gave a check around the bed and in the sheets and comforter to see if there were others, but there weren't.

About an hour later, another ant goes crawling along my arm. What the- ? So I squish that one, and this time I take the comforter off the bed, lift all the pillows - basically give a thorough search. But no, there are no other ants.

A couple hours later, there goes one more ant! GAH! I'm done playing around. I take the comforter off, I take the pillows off, I take the pillowcases off, I take the sheets off. WHERE ARE THESE FUCKING ANTS COMING FROM?!? Eventually, I find exactly three more ants: two on the wall (not even near each other) and one on the mattress pad. But no matter, I am pissed off now, so I grab the Raid and start spraying. The whole mattress pad gets sprayed and taken off the bed to get washed. I pull the bed out from the window and spray all around the walls and baseboards. Unfortunately, now my entire room smells like Raid, and I suddenly remember that, oh yeah, this stuff is POISON. I open my window in the hopes of airing it out before I have to sleep in the room.

As you can see, I'm not dead, so that's good. And I haven't seen anymore ants in my room since then, and it's been a whole week. But now? I've started seeing them in the bathroom, one at a time, just like before. It's one ant, usually around the bathtub somewhere, about ever time I go in there. I've looked EVERYWHERE, and I can't find a trail where they're coming from.

So my theory is that there's a big group of ants somewhere who keeps sending these guys out. Now, maybe they're sending out scouts, and they haven't figured out yet that the fact that the scouts don't come back probably means they're DEAD. Maybe they're sending out the scouts and assuming that they don't come back because they found somewhere really awesome, so let's send other scouts to find out! Or maybe they just know how much it pisses me off, and they're willing to sacrifice countless ants to drive me completely insane.

The ants go marching one by one, hurrah, hurrah... 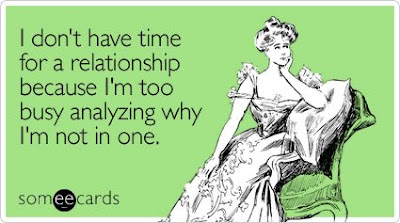 Ah, the wonderful world of boys - how little I really understand. So, problem the first is that I have three different boys dividing my attention. The last time I had three guys on my mind was my sophomore year of high school, and my best friend and I referred to them in our note-passing as Bachelor #1, Bachelor #2, and Bachelor #3. Bachelor #1 seemed vastly uninterested, but he was the one I liked most, so I spent most of my time just pining over him. Bachelor #2 wasn't actually a bachelor at all - he had a girlfriend. Bachelor #3 was single and actually had feelings for me, but I never really appreciated that like I should have. And who did I end up with? Bachelor #3... until Bachelor #2 left his girlfriend for me... and then left me for another girl... and then during a summer at home from college I got together with Bachelor #1.

So basically all of them.

And now, there are three bachelors again, and my brain is going crazy. Let's meet them, shall we?

Bachelor #1 is a handsome English teacher at Christian School in California. Sometimes referred to as "Hot Teacher Guy" or "HTG," Bachelor #1 enjoys surfing, studying Latin, and discussing literature. Bachelor #1 also still has a girlfriend, which is very unfortunate for our Bachelorette.

Bachelor #2 is a tall and good-looking graduate student at Stanford University. He's slightly younger than our Bachelorette, but certainly not outside her general peer group. He dances, sings, and loves Jesus. He also has what seems to be a pseudo-possible-girlfriend, which is obviously not so ideal.

Finally, Bachelor #3 haunts our Bachelorette with his boyish good looks and devil-may-care attitude. Word on the street is that he dances, but this has yet to be seen. He's got an amazing singing voice and a great sense of humor, and more importantly, NO GIRLFRIEND. Oh, and he's also, *cough* a junior in college. *cough*

Yeah, A JUNIOR IN COLLEGE. I'm a sketchy, cradle-robbing cougar. Well, except, I can only be a sketchy cradle-robbing cougar if he actually gave in to my advances, which he seems wholly reticent to do at this time. In fact, some of his responses have seemed downright annoyed and snarky, so maybe I'm just bothering him.

At any rate, I'm no closer to actually having a boy by my side, but damned if I can get them out of my head.

Finally, let's enjoy a meme from the jubilant Julaberry. Here are the... guidelines (I like that better than "rules"):

1. In the comments, leave one memory that a) you and I have shared together, or b) you have of me in general. It doesn’t matter if you know me a little or a lot, know me from the real world or the blog world, anything you remember would be fun to hear.
2. If you want to play too, re-post these instructions on your blog and see how many people leave a memory about you. I'll go read and see what I remember of you too!

(Wow, there were really only two guidelines. That's minimal enough to almost be annoying.)

So what do you remember of me? What sticks out most? Bring it on and share with the world. :)
Posted by Lara at 8:26 PM

Labels: Memes, Mix It Up

Yikes. I'm of the ignore-boys variety. It works well. Just see where things go, I guess?

Okay, about the ants: boric acid powder mixed with water in a spray bottle. Spray it around the baseboards of the room. It's non-toxic (it's sold in the pharmacy as an eye wash)and ants won't cross that line. The exterminator who came in to spray where I used to work told me that. Freebie!

ants, boys and a meme? You sure are packing it in aren't you? :-)
Ants - can't help ya there, good luck though.
Boys - I think if you don't try what happens will happen. That's kind of what happened with Mr. M and I. We talked all the time but I wasn't really interested - now look at us - married!
Meme - I always appreciate your love for your family. And especially the pictures with them.

I've had the ant problem before. Spray everywhere, especially anyplace in your house with direct access to outside. Wait a few days and spray again. I've always had the worst problem at this time of year, as they come in from the rain. I've had just one date all year, so I probably shouldn't give any boy advice. And the meme? Crowded in your tiny BlogHer room considering your outfits for the evening :)

distracted spunk - i think i'm about ready to ignore, yeah. it's just not worth the stress.

middle aged woman - ooh, thanks for the tip! :)

wolf lover girl - i'm greatly looking forward to thanksgiving, when i can get more pictures!

clair - that was the TINIEST room i've ever seen. but we had good times there. :)

Oh, juniors in college aren't that young. Definitely outside of cougar territory for you, and only on the border of cradle-robbing ;)

I remember walking in New York with you our freshman year. I remember examining your braid (you remember that picture? I just ran across it recently). I remember talking with you on the benches of Stern and Wilbur courtyards in the cold of the night after rehearsals, and how those conversations changed my college experience and my life. I remember a lot of things about you, old friend, and I remember how much I love you.

Okay, way too many memories to choose from. I'll go with one of the oldest and one of the most recent...

2001: Hiding behind a bush so I could surprise you at your Tmony birthday party, and capturing on the film the entire plot to give you a Burger King crown, break it, and then give you a new one -- all of which was actually just a distraction before giving you your REAL present.

And oh so many in between...

natalie - of COURSE i remember that picture. it's hilarious!

tpiglette - okay, i just started laughing SO HARD reading that. "down with clowns!" hahahahahahaha... oh, it never gets old...

Is that an F-sharp? I think you're a bit flat. We'd better work on that some more...

A junior in college!?

I've also had rogue ants in various places of my house recently. I really like the pesticide-free ant spray from the supermarket (Safer brand, in a yellow can). The active ingredient is mint oil, so it actually smells nice.

My memory of you is almost getting to meet you when I went up to visit my mother. It was a funny moment when we realized that Davis is still pretty far away from the Bay Area.

Hmmm on the ants - spray them with Windex. And put coffee grounds around the windowsills and floor in your bedroom or where ever you found them. They hate coffee, weird little bugs.

I remember when you used to be on Twitter way more often. :) Ok and you have cooler outfits than I could ever hope to have.

juka - laughing out loud over here...

ashley - it's not going well, i can tell you that.

teacher anon - oh, i'd forgotten about that, but you're right! man, that was disappointing, but kind of funny. :-P

issa - there's a creature on earth that doesn't like coffee? NONSENSE! oh, and also, i remember when i used to twitter more often, too. those were the good ol' days. :)

The soldier ants were actually on a reconnaissance mission, but they weren't dispatched by the ant generals. They were spies working for one of the three bachelors in your life. :-P

We've never met in person, so I obviously have no memory of our encounter (I'm hoping we can change that), but I do remember stumbling on a comment you made on another blog. The truth is, I came for your adorable face, then ended up staying for your writing.

Although it's probably not the cheeriest memory of you, the depression series was amazing. You were, and probably still are, the first blogger to write so openly and honestly about your pain. If only we could all be so brave :)

And you're really hawt too. xx

I don't know you and have only been reading a short while, but.....just FYI, if the ants are "sugar ants" or the kind that basically don't bite, chances are they are looking for water and if they are in your bedroom and bathroom looking for water, chances are you have a leak (if you would like to know how I am such an expert at this you would have to see that I have no bathroom cabinets or kitchen cabinets because when the ant lady found the leaks, it was toooo late and I had to scrap what I had because of mold and crap).

If they are not sugar ants and are great big biter ants...you are on your own.

LOL your story about the ants totally made my day!