More Tales from the Classroom

Some of you might remember that I once wrote about a student of mine who was particularly fond of hobos. I'm too lazy to look for the link, so instead, I'll just reprint his most phenomenal statement ever. When defining success:

The wisdom runs deep for one so young. Recently, in my current class, we asked them to write a definition piece on success as well. I'm not sure anything was quite up to par with that classic, but here are two of my favorites:

Success is like a shining river flowing beneath a set of mountains, with freshwater salmon swimming gracefully upstream.

I don't even know what that's supposed to mean. This second one's a bit more clear:

Success is not crying over the fat kid who took your animal crackers.

That's right - it doesn't matter that you're a loser who can't defend your own recess snack. All that matters is that you didn't cry about it.

I recently learned the mixed blessing that is having students remember what I teach them. We had a multi-day lesson on subtext a few weeks back, and it recently came back to bite me in the... well, etc.

It showed up when I made a joke about one of my students. We all have a good rapport in my classroom, so good-natured ribbing is common. One of my students chose to respond to a difficult question by looking it up in the book instead of trying to work it out on his own like I'd asked them to do. After the snickering died down, I said, "Well, now that we know C. can answer the question with the aid of the book..." The class laughed and "ooh!"'d at him for getting "dissed." I made with the innocent eyes and said, "What? I didn't say anything about his ability to do it without the book!"

"Yeah," one of the students said, "but you implied it." And then - I kid you not - three different students said, at the exact same time, "Subtext, Miss David!"

Well, at least they're listening to something I say, right?

As if we didn't have enough to do already, the STAR tests expect us to be teaching our kids vocabulary in the fields of science, math, and politics. Oh yeah, in our oodles of free time we'll just work on making sure they know all the academic language for their other classes, because certainly they know all of ours already. I mean, look how well they did producing metaphors.

On their most recent practice exam, they had this wonderful question:

Which of these refers to diseases of the brain?
a) neurobiology
b) epidemiology
c) dermatosis
d) neuropathology

Now, I knew the right answer, but I'm a college graduate. I'm fairly certain I wouldn't have known that in high school. And even with my college education, I had never even heard of "epidemiology" before. What the heck, California Department of Education? Why do you keep setting up our kids to fail?

Not to end on such a low note, let me share an interesting moment from class the other day, where our students realized just how different their two teachers could be.

During one of Ms. D.'s classes, I was sitting on the side of the class quietly working as she discussed the night's homework with the class. She explained that they would be making revisions to a piece of writing from the year, to practice reflecting on their own writing. You can understand the 16-year-olds were not thrilled about this "opportunity for growth," as we were framing it. S., however, sees a chance for something positive to come out of this, and raises his hand to ask, "Can we revise this all the way up to an A?"

"No," Ms. D. answers. "You're revising these for a separate 'revision' grade, but it won't affect your actual past scores." 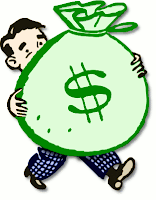 S. looked disappointed for a moment, then perked up. "What if we pay you?" he asked.

Unfortunately, I ruined her effect by looking up at that same moment and saying, "How much?"

What can I say? We are living in a material world, and I am a material girl.
Posted by Lara at 4:01 PM

Labels: Mix It Up, Work

hahahaa! Classic. Reminds me when I was being observed last summer. (standard thing, a lady shows up unnanounced and makes sure everything's good) The kids asked why "that lady" was there. I said "to make sure I don't punch you hooligans in the head."

They immediately started calling for help saying I was doing so.

Love the subtext story. Don't things like that make you feel all warm inside? They remembered!

Like you, I'm a material girl. I too have asked "how much?" Many of my children have asked to pay for a passing grade. LOL. I always end up saying "nah, thats not enough." I am loving your blog!

I once had a kid offer to wash my car if I'd just give him the 3 points he needed on his average to pass for the year; I told him to bring me a brand new Jaguar, and then we'd talk... I got your Material Girl right here!

By the way, I thought I was in the wrong place at first!

That's great. I think I would have asked how much as well -- I mean, it DOES make a difference.

That kid who didn't cry when the fat guy took his crackers? He'll have the last laugh, 'cause the fat guy will die young from his excess avourdupois.

I wish I had been a student in YOUR class!! Oh, and I also got the 'freshwater salmon' one!! As in success for the salmon is completing it's goal in life, even tho it means it's inevitable death! That student deserves an A+ !!! And you do too!!! And I was that fat kid!! lol!

Hope you're having a great week!

Ha. Subtext. Kids will always remember enough to make you regret teaching them.

I love the "How much" story. That would've been my response, I'm pretty sure!

Those the joys of working with high school kids. When I had third graders, my students rarely caught some of my little comments. For me it was a little therapy just to say them. Once in a while, someone would pick up on one.

I loved the "Success is not crying over the fat kid who took your animal crackers." That's just great.

I would have asked "how much" and like 'proverbs' would have said it wasn't enough...

Very nice 'serious' on the interpretation of salmon one... you deserve the gold star tonight!

This is great! I may steal the Definition of Success idea from you... this seems like a great way to end the year for my Seniors. Aren't kids grand!

He doesn't cry over stolen animal cookies? Score one for pacifists. Oh, yeah!

joel - yes! that's very much what our environment is like as well. i love having that rapport with the students. :)

tali - yeah, that last story got quite the reaction from our students, too.

proverbs - the offer amounts are never enough. why is that? if only they would offer me seven or eight figures, i'd be happy to help them out.

tense teacher - exactly! where's the love? jaguars aren't that hard to come by, you know. :-P

angela - it TOTALLY makes a difference. i mean, i think the harm i do in accepting a bribe from a student is outweighed by the good i could do in the world with a cool $50 million.

CTG - your comment made me laugh out loud. for many minutes in a row.

r u serious? - wow, excellent salmon analysis, kid. and i hope you have a good week, too. :)

sassy belle - yep, they always remember just enough to bug me, but not enough to make me feel like a useful teacher. :-P

aimee - we have other differences too, like the fact that i'm awesome and she's "eh", but this was a new one i discovered.

IMC guy - there are pros and cons to having kids who can understand my snarky comments. it makes it fun when we can share in the joke together, but it also means i have to be more careful about what i say... ;)

wolf lover girl - i think i snorted dr. pepper out my nose when i first read the essay that included the line about the fat kid. seriously, who thinks of that stuff?

seth - hey, steal away. defining success is certainly not an original idea of mine. :) and yes, it's a good way to end a senior class, for sure.

I think he's a pacifist. Didn't you see that he was wearing a "Save Tibet" T-shirt and a "Help Darfur Now" bracelet when his animal crackers were stolen?

hairy caterpillar - that's all just part of the cover-up of his latent maniacal tendencies. he's clever, i'm telling you.

I think it's best always to assume the best about a person until robust evidence justifies a different view. On a very related note:

Dammit. I'm listening to an NPR documentary on Guantanimo. What is this, year three, four? Why is our government doing this to people? Why do we citizens have to make such an effort to try, vainly, to prevent the government from being so evil? The number of Westerners killed by terrorism is utterly insignificant relative to the number killed by, say, eating too much. Geez. Us.

I never cry, but I'm almost crying at the moment with frustration.