I am not an organizational freak. I'm pretty okay with general chaos. I do not have my CDs and/or DVDs alphabetized, I do not have my books lined up in any clear order, my clothing drawers have no obvious system to them. I tend to pile important papers in the order I receive them, until a huge stack forms and I go on a sorting binge to get rid of them all. My room is often slightly messy, with clothes tossed on the ground and shoes sort of haphazardly dropped where I took them off.

However, I can be, at times, an organizational freak. Mostly with lists. I like lists. Lists are helpful. Lists are tidy. And lists are a boost to the ego when one is feeling overwhelmed (because you can check things off the list and say, "Hey, look what I did!"). I make lists for pretty much anything that involves remembering more than three pieces of information. When I have dance shows, I make lists of what pieces I need to bring for each and every costume/outfit – at the Ball one year, this meant five separate lists. When I go on trips, I make lists of what I need to remember to pack. And when I have a lot of schoolwork, I make lists of all the assignments that need finishing.

Most of the year, this works out okay by just using my planner. See, I have a planner that I keep with me most of the time, and in it I write any and all appointments I make, as well as school assignments that are coming up in the future. Then, I put a checkmark next to the assignment once it is done. (It gets a bit discouraging, however, when I see the assignments without checkmarks, even days after it was due.) It’s a good way to keep my schedule straight in my own head, so I don’t forget where I’m supposed to be when and what I’m supposed to be doing for it. 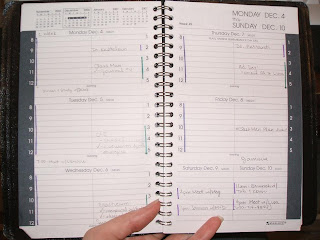 But there’s more. In addition to just writing this stuff down, it’s also color coded. I can’t just write it down, ‘cause that won’t necessarily capture the length of time it will take, so I have to have a line down the side, marking off the entirety of the time I need for a given activity. But then I wanted a way to separate out the different types of activities I had. Now, the first idea would be to write the different types of activities in different color pens. But that’s a bad idea, because pens can’t be erased, and I often need to change things in my planner. So I had to keep writing in pencil, but I still wanted some sort of distinction. “A-ha!” I thought. “I could make the lines different colors! Brilliant!” I realize the colors are a bit hard to see in the picture, but blue lines (on the left side of the days) are for my high school work, green lines are for university classes, and purple are for personal appointments. Nice, no?

Like I said earlier, however, this works out okay most of the year. Now, however, when the term is ending in less than a week and I have a shit-ass-ton of work to do (recall from an earlier post that shit-ass-ton = a LOT), the planner is insufficient for my needs. So in addition to the planner, I have created a To-Do list. But this is not just any To-Do list. This is my Do-Due-Done list. 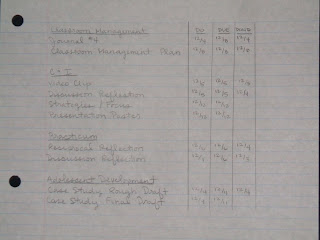 The Do-Due-Done list works like this: I have a list of all assignments / work to finish before the end of the term, separated by course. Then I have three columns – when I am going to Do the work, when the work is Due, and when the work is Done. In the columns, I put the appropriate dates. Ideally, the Do date is before the Due date, and the Done either matches or (in spectacular cases of productivity) precedes the Do date. Making sense so far? As you can see, no Done has yet to come after the Due date, which means none of that work has been late. Notice, however, the yet in that statement. You’ll note there are three major blanks in the Done column, and they are Due on 12/11 and 12/12, respectively. That would be in two and three days, respectively.

Say it with me: Crap.

However, the Do-Due-Done list is supplemented by a daily To-Do list as well, which includes my goals for each given day. I’ve mostly been doing pretty well on those lists, which is the biggest reason nothing has been late so far. Today’s list, however, is beginning to look a little daunting, as it is already dark outside and I have begun nothing. Well, except for blogging. Which is, in fact, on my daily To-Do list.

It’s all about priorities, people.

Day 9 of LaBloShoeMo: The Black and Tan Sneakers 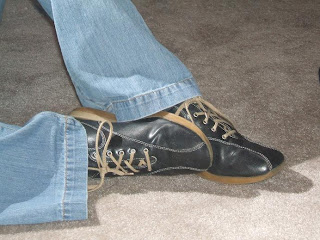 I’ve had these shoes for about five years, which is a damn long time for me to own clothing or shoes. They remind me of bowling shoes, but a lot more stylish, not to mention subtle. They are VERY comfortable, but they don’t look like old and worn out yet. They don’t get much wear these days, mostly because I have other black sneakers (coming soon!) that I love even more. But when I find myself wearing black and tan together in a casual outfit, I stop and think to myself, “I have the perfect shoes for this…” Then I walk around feeling a little giddy for matching so well. I can be awfully self-congratulating when it comes to my shoes, in case you haven’t noticed yet.

Going back to your previous handwriting analysis, I notice that what you've got here is much closer to example 1 than 2 (and perhaps even neater). If you drew any conclusions from that earlier post, maybe it's worth thinking about where you've come since then. :-)

What a great and clever system! Perhaps I'll start using that too :)

graham - you know, i hadn't thought of that yet, but you are right. i did draw some conclusions from the earlier post, mostly because we had been discussing it in our suicide prevention class, which is why i thought to even analyze it at all. so yeah, i think it's a good marker for progress. :)

cc - i heartily encourage any and all interested parties to make use of my obsessive system of lists. let me know if it works for you!