[Back to our regularly-scheduled series. If you're jumping in in the middle, we started with Post #1 and you can follow the links from there.] 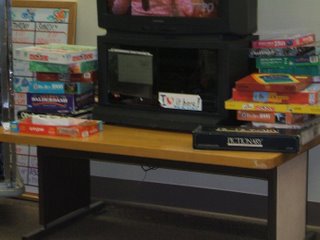 The psych unit – well, at least the one in which I was staying – is really not that bad. I mean, okay, it’s still a generally small space, so you start to feel a little fenced in after a while. And okay, the food’s pretty awful, so it’s easy to drop a lot of weight and feel nauseated all the time. And, as we’ve already seen, some of the nurses can be a little weird and annoying. Okay, so maybe it’s not great, but it’s generally not awful. I mean, we had games to play! And puzzles – LOTS of puzzles. My guess is that scientists did a study way back in the day that determined the cure for insanity of any sort was to do lots and lots of jigsaw puzzles. Must be because fitting together the little pieces of a kitten playing with a ball of yarn somehow stands in for fitting together the shattered pieces of our broken lives. I didn’t actually do any puzzles, though I did play many rounds of Pictionary with my various visitors. Have you ever tried to draw biscuit? It’s REALLY hard. Harder than you think.

At any rate, while it really wasn’t too bad staying there, there were definitely moments when it felt like a prison. For one thing, there was the whole idea of ‘privileges.’ After basic standards of living – food, clothing, shelter, simple hygienic offerings – we were given ‘privileges’ 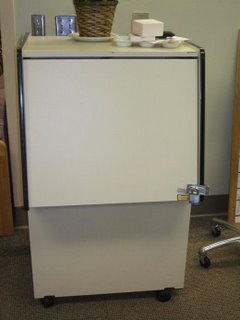 based on how long we’d been there, how well we’d behaved, and how dangerous/safe it was to give us those privileges (based on our diagnoses – for example, I clearly wasn’t allowed to have nail-clipper privileges… Okay, that was a bad example, because there was no such thing as “nail-clipper privileges,” but you get the point). Pretty much as soon as I got there, I started requesting computer access, and eventually I got the elite distinction of having computer privileges. Of course, it meant every time I wanted to use the computer I had to go ask for a key to unlock the little box in which they stored it (see picture), but that wasn’t too awful. And the nurses who were less familiar with me had to check to see if I was authorized for computer privileges. You should have seen me, all snobby with my nose in the air, flaunting that key like shizzat ‘cause I had computer privileges. I was less interested in my patio privileges, which I got after staying for 24 hours; when I was finally discharged, however, and I found myself completely blinded by the brightness of the sun (as J. said: “The day star – it burns!”), I began to wish I’d gone outside at least a little bit while I was there. And since I was such a good girl, I never had to have any of my privileges revoked. Insert smug smile here.

Aside from privileges, the unit felt like a prison because of the way we all talked. In group therapy, we always used to talk about what it would be like when we went back to our life “on the outside.” We talked about supporting each other “on the outside,” or who was waiting for us “on the outside,” or what our lives had been like when we were still living “on the outside.” I mean, the way we talked about the outside, you’d think we didn’t have patio privileges or anything. We also talked all the time about when we’d be released – “When do you get out?” or “When are they springing you?” And I kept having to stop myself from asking every patient I met, “So, what are you in for?” It just seemed… rude somehow. But I always wanted to. 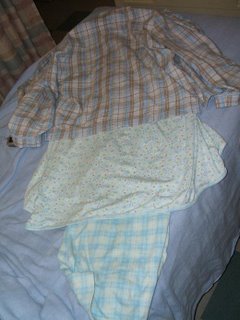 Of course, as I said, it wasn’t too awful. I mean, we didn’t have to wear uniforms or anything. In fact, we were strongly encouraged to wear street clothes in the unit during the day. I mostly wore rehearsal type clothes all the time – sweats and t-shirts and stuff. It wasn’t haute couture, but it wasn’t a hospital gown, either. But my favorite was my pajamas, which I pieced together from bits and pieces of hospital attire. There were the plaid flannel drawstring pants, then the wrap-around smock with flowers and stars on it, and finally the plaid (but not the same as the pants – a different plaid) shirt that was too small, so the sleeves came to the middle of my forearm. Check out this phenomenal combination and tell me it’s not H-O-T, hot. Go ahead – I dare you.

It’s nice experiencing life “on the outside” again. And having my own computer at my disposal whenever I want is pretty nice, too. But I gotta say – I do kind of miss those awesome PJs…

And as long as we're talking about me in the crazy house, I made myself into a Southpark character. This is me in my Funny-Farm incarnation. And yeah, that's *exactly* how I looked too... It's uncanny, really. 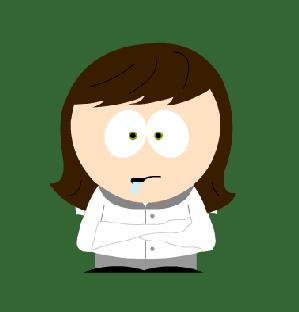 In the next post: How I managed to keep a hold of my identity through a crisis situation.

I'm glad to have you back "on the outside" too =). I am amazed (as I typically am) at your strength, openness, and way with words as you write this series.

One note: I collect my usual blog haunts through an aggregator and it seems to dislike your blog for some reason, because it hasn't been showing these recent updates!!! And I'd been making sure to look closely since I knew this series was coming.

Anyway, this is to send a hug to the next state over and let you know that I've caught up on the series (better late than never!) See you when you get back.

Thanks for being such a sweetheart on my blog. You're a wonderful person, and I'm learning more about you with every post you make.

And thanks for being brave enough to share this with everyone. I think you're fabulous!

Except for the knowledge that you had to go through all this, these posts are quite amusing.

On a totally separate topic, The New York Times Magazine has an excellent article on No Child Left Behind and charter schools that you might find interesting:
http://www.nytimes.com/2006/11/26/magazine/26tough.html?pagewanted=all

Does STEP classes discuss all these issues?

tali - yeah, i have to say, i'd been mildly curious why you hadn't lent your voice to any previous entries. i'm sorry your aggregator hates me. tell it i hold no hard feelings against it, and i hope we can be friends.

aly - thanks for being such a sweetheart on my blog! i think you're equally fabulous, so it's a good thing we found each other. someday, one of us will have to make a trek across the world so we can meet and have a drink. :-P

mous - i'm glad you find them amusing. putting an amusing spin on them has helped me keep a little bit of perspective, which is nice.

STEP classes address a lot of issues, but things like that article and similar items tend to be discussed outside of classes, in email lists or the like.