In some ways, it feels like I’ve had this blog forever, when really it’s only been two years. But there are times, when it feels like those 731 days have just flown by. Was it really just two years ago that I sat down and published the first post here at Life: The Ongoing Education? How much has changed since then…

When I first opened this space, I wanted it to chronicle my life as it grew and moved through the upcoming transitions in my life. I was starting graduate school and becoming a teacher, and I wanted a space to talk about the new challenges I was facing. I was getting engaged and looking ahead to being a wife and mother, and I wanted to write about how viewed the woman I was becoming. I saw where my life was going, and I wanted to keep a record of it as it went.

Since then, my life has become any number of things that I never expected. Instead of talking about the challenges of teaching, I spent most of my year in graduate school writing about the challenges of battling depression and cutting. Instead of writing about wedding plans and honeymoons, I wrote about breaking up with the man I thought would be in my life forever. Instead of writing my life as it moved through all its anticipated stages, I wrote my reactions to a completely surprising life that went anywhere but where I expected. These two years have seen so many changes, and I can’t help but thank my lucky stars that I had this blog on which to chronicle them.

And then there’s you, my lovely readers. You are a mainstay of support for me, and I honestly don’t know what my life would be like without your encouragement and love. You accept me with all my flaws and embrace me in spite of them. You give me the benefit of the doubt when I make mistakes. And you always, always get me laughing when I need it. Have I considered quitting this blog? Many times, of course – I think most bloggers have at one point or another. But in those moments, the relationships I’ve formed with you all have been what’s kept me going. Through two years and 4,600 comments (yikes!), you’ve all been absolutely amazing.

So what’s been going on with me this year? Hmm, let’s look at the highlights…

July 2007: I got a job teaching preschool, visited family in Vegas, was a bridesmaid for Tpiglette, and was not a bride.
August 2007: I spent a lot of time dating New Boy, and I loved every minute.
September 2007: New Boy dumped me, much to my dismay, but I picked myself up and moved on.
October 2007: Unable to take it, I leave the preschool job, feeling a huge weight lift from my shoulders.
November 2007: I participated in NaBloPoMo, celebrated one year free of cutting, joined Facebook, attempted a novel, went to Vegas for Thanksgiving, and posed in my underwear for HotChixDig.com. (Busy month!)
December 2007: The second annual LaBloShoeMo was a rousing success, as were my holidays with family.

January 2008: I started my new nanny job, and generally began feeling good about my life’s direction.
February 2008: I returned to church and started a blog to write about my faith.
March 2008: My mom came to visit me, which was awesome, and together we went to the wedding of another dear friend of mine.
April 2008: Batman and I started dating!
May 2008: On the negative side, my living situation suddenly fell apart; on the positive, my high school named their new gym after my dad.
June 2008: I lost my nanny job unexpectedly, moved to a new house, found a teaching position, and stayed positive and healthy through it all!

(Wow, did you actually read all that without getting bored? If so, good for you! If not, well, hey, I can’t blame you too much.)

Lastly, links to my favorite posts from the last year, in case you feel like getting nostalgic and browsing:

Feels Like Home: June 28, 2007 (Although it was a sad post to write, I ended up loving the way I wrote it. Seems weird, I know, but I think most of you writers understand.)
Not Going Back: August 9, 2007 (This was a great moment of introspection and growth for me, spurred on by having my blog reviewed.)
Toilet Humor: October 15, 2007 (I was laughing so hard at this post as I wrote it, and the best part is that it’s all true.)
Healing: A Work in Progress: March 10, 2008 (More introspection and growth, this time by acknowledging that there is always more growing to do. It was an important step for me, accepting that.)
“Go fall in love with life again.”: April 20, 2008 (This post explains how Amanda saved me from blog exhaustion and renewed my spirit. Go her!)
This Space for Rent: May 8, 2008 (The post that explains how those who need a safe space to write can rent out my blog. I love this post because of how much it’s meant to those who’ve made use of it so far. I’m glad I made the offer.)

So that’s it – the second year of Life: The Ongoing Education. Here’s to another 365 days of posts, comments, and – as always – life lessons. 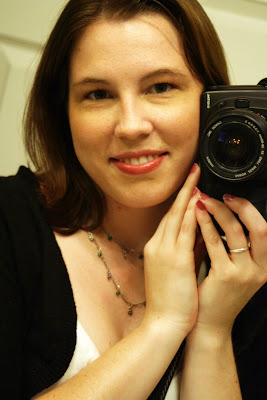 You will stick around, won’t you?

Congratulations on such a great year :) I was going to say on 'another great year' but I didn't know about you the first year of your blog life so... :)

Congratulations on two years of blogging. Thanks for the review. I missed some of the earlier episodes. I'm glad you decided to stick with it.

It's always pretty amazing to stop and take stock, isn't it??

Of course I'll stick around! Congratulations on two years!

Look forward to hearing about the new teaching job - maybe it'll help boost my spirits about the fact that I could get one soon.

On a side note: Why do you have a wedding ring on your left hand? ;)

Yay 2 years! I'll stick around as long as you'll have me.

Isn't it amazing how we plan our lives and yet God has something much better than we could have imagined. Of course, it's still full of ups and downs...keep blogging girl!

east coast teacher - the picture was taken in a mirror. the ring is on my right hand, but in the mirror, looks like it's on my left. :-P

Congratulations! Life without hardship and struggle would not allow us to grow. You've done a lot of growing in the past two years. Here's to the happiness and joy that can be found at the end of those struggles.

Happy blogiversary! It's always interesting to look back and see how far we've come.

Congratulations on two years, and I'll definitely be sticking around.

For sure. Congratulations on two years of blogging!

You inspire me with every post of course I will stick around. Congratulations on 2 years...

Congratulations on two years!! I know, I've only found you in the past few weeks but found you I did and I'm glad...

I so love this reflection... it's funny I was just saying to someone that I started my blog initially to chronicle being pregnant and a new mom....and now that I am a new mom I don't write as often! Thank you for this walk down memory lane, as always, you inspire me with your strength

Never mind posing in your underwear, it takes real guts to get as naked as you have in your writing. This is my first visit (triggered by a comment you left at
Carmi's place for his anniversary) but just reading the retrospective (and the pee story -- who could resist that one?) I can already tell I'll be back.

Wonderful writing, honest emotions, and I still think you're about the most adorable thing I've seen. (well, next to my own daughter of course :))
What's not to like?
And I would like to say - congratulations for making it through all the ups and downs - and coming out the other side healthy! THAT is fabulous!

I don't know how, I missed this post. . .but I wanted to wish you a very Happy Blogiversary!

I can't believe that this blog is only two years old. It seems so much more mature.. . like you've been out here for ages and I missed it all. Thanks so much for sharing you life's journey with all of us!