We've been having a fair amount of change at work lately, with a number of kids moving on to new schools and a number of other kids moving in to ours. I'm sure I'll give an updated "Cast and Crew" list soon, but in the meantime, I'll just mention one in particular.

At least he naps...Pacer (yep, he paces... with his hands behind his back... looks like a tiny businessman) has been with us only three days so far, and his transition is going completely normally. For those of you who might be unfamiliar with a "normal" preschool transition, this means he cries a lot when it's time for Daddy to leave in the mornings. And sometimes he cries for Daddy during the day too. This is normal, though, because he's adjusting to a new situation, so it's okay to long for the familiar; abnormal transitions are ones in which the kid cries the entire time.

Yesterday, Pacer's older brother L. came with Daddy to drop him off. L. is six years old (our oldest kids are four), and will be starting first grade soon, but his school doesn't start until next week. With some of our kids on vacation, we had a lighter schedule than normal, so we invited L. to spend the morning playing with us at school. This way, we figured, Pacer could have someone with whom he felt comfortable, but who wouldn't seem terribly out of place (like, say, a large grown-up person might). L. agreed, and Dad was able to sneak out without any tears at all from Pacer.

Within minutes, however, we had a new problem, completely unforseen: Bossy (age 3) was completely and totally infatuated with L.

She stared up at his with starry eyes, asking if he wanted to read a book with her, or help her with this puzzle, or would he maybe like to go for a walk on the playground? He would say, "I'm going to play in the sandbox," and Bossy would quickly announce, "I'm going to play in the sandbox, too!" before running after him. She would show off for him, sometimes subtly - by which I mean staring at him intensely while jumping and shouting repeatedly in his field of vision - and sometimes more obviously, with a "Look what I can do!" warning before some seemingly death-defying stunt. When we went to the table for snack. or an art project, or lunch, L. would sit down and Bossy would lunge for the seat beside him, announcing to the world, "I'm going to sit next to L."

Funny thing is? I don't think he noticed her. At. All.

Poor little Bossy, chasing after him like a lovesick puppy. And Boss Lady and I couldn't help but chuckle as we watched the drama unfold, because we know how this goes. It's a tale with which we're all, I think, familiar: Girl goes to friend's house one afternoon to study, when suddenly hunky older brother walks into the kitchen fresh out of basketball practice and grabs a snack, sparing only a sidelong glance for this new specimen of female sitting in his kitchen. Maybe, if she's lucky, she gets a "Hey," from his angelic lips.

Come on, you can't tell me you haven't been there. I spent a large chunk of high school silently adoring my best friend's brother, Tim. Boy didn't give me a second look until college, after I'd already dated his best friend. But damn, I worshiped the ground he walked on. And the pool he played in, since I went religiously to every single one of his water polo games.

It works other ways, too. My brother's friend Kevin had a crush on me, despite his being two years younger than I was, at my wise old age of 13. And I can't even begin to count the number of times my male friends came over, only to fawn over my hot, blonde-haired, blue-eyed older sister. Because apparently this was all the rage at the time: 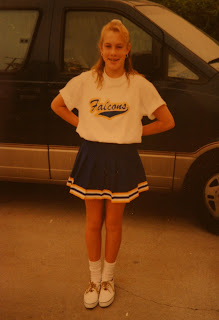 Oh, Seeser - please don't hate me for showing this picture to the world.
Seems to me, looking back, like this older sibling crush was an integral part of adolescence. I had it on Tim, Kevin had it on me, my friends had it on my sister - everyone was taking part in this trend.

So how about you? Any "older sibling crush" stories to share? Or am I totally crazy in thinking this is common?
Posted by Lara at 2:26 PM

I never really had this growing up - a lot of my friends were only children! Crazy, huh?

No, this didn't really happen, although Curlysis and I did have some overlapping male friends that caused a bit of jealousy. Hee hee. Funny story.

I never crushed on a friends brother, but it was kind of creepy when I hit high school and my older brother's friends started noticing me when I had always just been a nuisance. Ick.
I did have the make best friend through a good part of high school who suddenly wanted to ask me out when I broke up with my long time boyfriend. I remember looking at him in disbelief - and saying what every guy just LOVES to hear " but - you're my brother! I feel like you're my - my brother! " And our friendship crumbled right there. Sad.
Oops. This is YOUR blog. :)

That would be 'male' best friend. Time for bed I'm thinking.

seeser - hey, you were the one who brought up the "ajax!" story for all the world to read. ;)

You know, I remember a point in my school career where I wondered why my younger brother's friends didn't have crushes on me. I felt like they should, I was, after all, the older sister. Maybe they did and I didn't know it, but I never thought they did.

You know, I was in love with my older sister, like insane.

Oh I had a crush on a guy and go to know the sister better to try and get closer to him (we were neighbors). I finally gave up on him (he was younger anyway) and became best friends with the sister. Best thing I ever did in High School!

It was lovely to see you today! Thanks for coming by and playing with us.

Man, I spent so many years with an enormous crush on the twin brother of one of my friends. Aside from being a generally nice person, he really never gave me the time of day.

Actually, he never showed any interest in women until college. He then found a girlfriend that he promptly married. Must have known exactly what he was looking for.