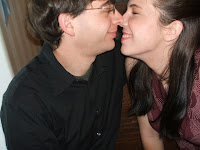 Well, it was a strange weekend. J. and I should have been married on Saturday (or Sunday, depending on which place we would have decided to book. I'm pretty sure it would have been Saturday, though), so it was a bit difficult. I talked to him on Thursday and when saying goodnight I said, "Have a good weekend. Happy would've been married." It was a strange way to end a conversation.

I was relatively okay on Saturday, though. Aussie Boy and I took a trip to the mall so that I could buy a few things for a friend's bridal shower (okay, so that was a little depressing, but only a little). We had a very tasty lunch and got a nice chance to walk around in the sunshine. After that, I took a brief nap before heading out to a blues house party.

Folks have been trying to get me into blues dancing for months now, and I finally gave in a few weeks ago and went to a Monday night event. It was fun, but scheduling made it tough for me to get to another event until the house party this weekend in SF.

"What's a house party?" you might ask. Basically, a few people who have a nice townhouse up in the city with a semi-large dance space decided to throw a private dance event. Upon invitation, other dancers came to hang out, chat, and dance blues downstairs. It's a bit elitist, but no more than any other kind of party, where only friends and friends-of-friends are welcome. Everyone seemed very friendly, and I had a good time meeting a lot of very cool new folks. The dancing was awesome, too. Talk about a sensual dance - many of us refer to it as "sex on the dance floor." I got a chance to dance with a lot of great leads, who made me feel like I totally knew what I was doing, even when I didn't.

I also met a new boy who was very fun to chat and dance with. And he was TALL! Like, taller than I am! I'm guessing about 6'3" or thereabouts. How exciting! I'm so used to dancing with guys either shorter or about the same height. We had a great time, and he actually lives very close to where I live (a pleasant surprise given most attendees of the party live in the city), so I decided to ask him out.

When J. and I first broke up, one of the things that scared me about "starting over" was dating. I'd never really dated before. I went to high school dances, and I went on some group dates with friends, and I think I went on two dates with a friend's brother about a million (or maybe only six) years ago. But the Ex and I became a couple without any real dates leading up to it, and it was the same for me and J. The idea of being 25 and suddenly having to make my way through the world of dating without any real practice was quite terrifying.

But then there was Aussie Boy. While technically we were set up, we still went on that first date, and then had a number of dates after that. That was dating. Well, it still is dating, though it's a bit more comfortable now that we know each other better. But Aussie Boy and I are non-exclusive - an exclusive relationship wouldn't really make sense for such a short time period (he'll be moving away Sept. 11). So even though he and I have been spending a fair amount of time together, the idea of how to maneuver the dating scene has still been on my mind.

So I met this new guy at the blues party (remember him? I know that part of the post was a long time ago, and I kinda went off on a tangent there, but try to stay with me), and I decided that I liked him and would like to see him again. So I resolved to ask him out before the night was over. Around 3am he came up to say he was heading home. This was my chance! I opened my mouth to say, "Hey, would you like to go out some time?" and wouldn't you know it? He said, "Would you like to go out some time?" I sort of chuckled and said, "Yeah, that would be great. Let me give you my info."

My favorite part? We had talked a bit about my height self-consciousness at the party. When he emailed me to talk about going out, he said, "FYI, you should never be self-conscious about your height!!! That's part of what makes you so hot! I'll take you out to dinner only if you wear high heels... deal?" Okay, over-use of exclamation points aside, that's sweet, right? Besides, I have so many cute pairs of high heels, it's a great deal for me.

So this dating stuff? I guess it's working out okay for me so far. I've discovered that I'm a lot braver and more confident (yes, even with the self-consciousness) than I was six years ago. I can handle the thought of rejection (and the reality, too) better than I could before. I like myself more, and I figure if someone doesn't want to date me, well, that's his loss.

Of course, that doesn't mean I'm not still sad that this weekend passed without a K-J wedding. The heart is funny that way - it can heal even as it's still breaking. 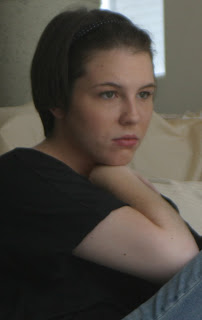 Your last sentence made my eyes tear up. Wow.

You are hot and confident and have SO much to offer whatever lucky guy gets to date you. Dating sucks ... but it can be fun too.

You're a strong woman, my dear - and you are a wise one too. It makes me happy to know that you've come through so much and are still doing it all with such grace - and sharing it, of course. I want to be like you. *mass hugs*

*Bonus on wearing your heels.. woo!*

That was such a GREAT post. I dont' really have the words to describe why. But it just clicked in my head, you know? Yup!

Wear the heels, I am nearly six foot in socks and I still wear heels, bugger them if they can't handle it!

I am very excited for you, will you get Jitta to take a piccie before you head out?

Memories of what was, and what may have been always make certain times of the year hard, just know that I am on your side. xx

I love you so much and I think that you can do anything you set your mind to. Including date and be foxy in tall high heels!

Talk to you soon.

Hey, that is great -- an upcoming date to look forward to, and an occasion to wear some purty shoes! That was a tough weekend to get through and you did it.

Hi I just discovered your blog and read your first post and it was really engaging, I couldn't stop reading! You have a really nice writing style and the tangent in the middle just built the suspense about the guy at the party!
Can't wait to catch up on how the date goes ;)

Good post (joining the chorus) and so glad to hear something from you! Was getting Sad! One more exclamation point for the road!

Congrats on making it through the weekend, with a date and a great post to boot =)

And on behalf of the population of short-girls-dating-tall-guys I'd like to apologize...but not too much =P

Lara,
You are brave, strong, beautiful, wise. Never forget the title of your blog. You are doing it girl-you are.

So bittersweet. And yet I can't imagine why dating would be stressful - I still think you look like Liv Tyler.

I guess I've never known your height...I'm 5'10". Love it now, sweetie, love it now. If I could go back 10 years and be gentler to myself, really see the woman I was, I'd have sidestepped a lot of unnecessary stuff.

You are simply a knock out. Lucky me, I've learned it about you from the inside out.

I look forward to reading about your marriage and kids when the time is right, until then, how about another dance?

Sweet about the guy you met. And very cool that he asked you out just as you were about to do it! :-)

I can't wait to hear about the date.

sandra - ooh, tearing up, huh? that's quite a compliment. i'm working on having fun while i'm single, so that i won't have regrets when i finally get the "settled down" life i'm craving.

aly - "i want to be like you" may be one of the greatest compliments i've ever received. thanks, kid.

CC - sometimes, we just feel that connection to what someone's written. i totally know what you mean. glad you could feel that.

lala - see, i'm about 6' in heels. i think the problem is less that i'm too tall and more that i hang out with short people. :-P i will work on getting photos of my pre-going-out outfit.

sassy - awww, thanks kid. i miss you and can't wait until you're back!

mayberry - true on all counts. now, of course, i just have to figure out which shoes...

guilty secret - welcome! i love meeting new readers. i'll be sure to keep you updated on the date.

tori - you're sweet to remind me. thank you.

mom101 - i still don't see the liv tyler thing, but thank you anyway. besides, i bet liv tyler was stressed about dating when she was doing it too.

amanda - i'm honored that you plan to stick around my rambling blog-home long enough to read about that marriage and those kids. here's hoping to a number of years as bloggy friends. :)

wolf lover girl - i will definitely keep you updated!

jitta - yes, yes. we all know that you are the awesomest matchmaker ever. well, for me, at least. ;)

I am proud of you for making the best of what could have been a terrible weekend! And KUDOS on the date! He sounds nice so far, keep us posted!

ffbgirl - yes, he definitely seems nice so far. i think we'll be going out next friday, so i'll be sure to blog about it afterwards. :)