Deeper Than You Get

Warning: This post is raw, real – perhaps a bit too real. If you’re looking for something light, I recommend a glance at Mrs. Chicky’s post from today (‘cause little kids dressed as chickens are always fun), because this post may be deeper than you get.

Smiles were tough to come by today, even with everyone dressed up in their finery for Halloween. “Did you dress up?” Yes, I did. “What were you?” I was a person, and thus the correct question is “Who were you?” I decided to go as Elizabeth Bennett, the beloved heroine of Pride and Prejudice. I had all the required elements already, and I knew it would be fairly comfortable, and all English teachers should dress up as literary characters whenever they get the chance, so there you go. Picture of me, Streetmate, OP, and Dr. P from class this afternoon (edited for anonymity). You know my costume, and Snow White’s obvious, but OP is Grammaticus and Dr. P is Modernism. You’d have to be an English geek to find that amusing. 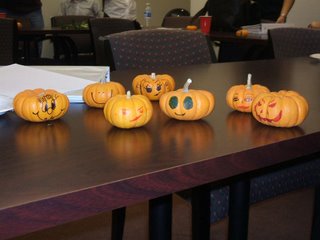 Picture of mini pumpkins, also from class this afternoon. We all decorated one. Guess which one is mine…

That all said, it was still a tough day. School this morning was just very disheartening. My kids were not so courteous in study hall first period, which I was supervising. Then my CT and I discovered that grading their most recent tests 1) took way longer than we’d been expecting, and 2) was extremely depressing, as many of them were barely passing. (Though, to be fair, this was the written portion of the test; most kids did very well on the multiple choice.)

From school, I headed to my second therapy session… and I burst into tears.

From therapy, I headed to meet with my academic director… and I burst into tears.

And from that meeting, I headed to class early to talk to my professor… and I burst into tears.

Tears were a common theme of the day, unfortunately.

Moving backwards in time, yesterday started out much better than today, though ended up similarly. My supervisor came to observe me teaching a lesson, and the lesson went well and the debrief was positive. I got my work done in time for afternoon class, and class was generally interesting. Then I got home and WHAM! Within minutes I was curled up in a ball on the corner of my bed sobbing like a baby. My stomach was much too knotted up to allow for food, so I headed to campus to work on an assignment for class this afternoon. Said assignment progressed very slowly, as do most assignments these days, given that my attention span is about equal to that of a brain-damaged , I have constant headaches, and I still get no sleep. After I’d done as much as I could, I called the Eggman to see if he was free to hang out for a bit. We went and got tea, and chatted for a long time. If I hadn’t loved him before (and I did, believe me), I would have loved him eternally for these two words:

He told me I sparkle. That’s one of the nicest things anyone’s ever said to me. He also got me thinking a lot about my future and how I view it now, as opposed to how other people might (and do, in his case) view it.

Once upon a time – let’s say, oh, I don’t know, sophomore year of college – I had no idea where my life was going. I mean, I knew I was going to graduate at some point, but I didn’t know what my major was, what kind of job I would want to get, whether I would want to go to graduate school, etc. I had no idea when or to whom I would be married, where I would be living in five years, or how I would find my way in the world. This is not uncommon for college students – to not know where their lives are headed – so it is not strange that I didn’t know where my life was going. The strange thing is this: I was okay with that.

But then I filled those pages, figured things out, and set my future. And for a good three years or so, I’ve known exactly where my life was going, and where I would be and what I would be doing for the next five, ten, twenty years of my life. There were no holes – or very few, at any rate – no blanks, no question marks. And there was no fear. I knew where I was headed, and I was happy with that, and the world was good.

Now, suddenly I find my set-in-stone future ripped to shreds, and all that remains is a big black hole, gaping in front of me like the mouth of a great beast waiting to devour me whole. Suddenly I look to my options and find an impassable sea of uncertainty between me and solid, rational, makes-sense land. Suddenly I try to picture my future and I see… nothing.

So what happens now? Where am I going to?

How do I find that girl again, the girl who saw an empty future as possibilities, rather than dead ends? How do I regain the security and faith I once had, the belief that everything would work out in due time? How do I convince myself that not knowing is – really and truly is – okay?

1. I am the author of the anonymous posts whose prose often is stilted. Henceforth I shall sign as "Nona".

2. Re: the questions you present at the conclusion of your post. Resolution is largely an internal, volitional act: one resolves an issue rather than has it resolved. Possibly you've just learned that "the belief that everything...work[s] out in due time" is an uncritical viewpoint of living. The fact is, and I remind myself of it daily, that for absurd or cruel reasons or for no reason at all, a majority of the individuals on this planet daily experience pain, indignity, inhumanity. A few years' considerations do not suffice to construct a meaningful life on such uncompromising foundations.

Question all ideas and conventions critically: all of them. Embrace uncertainty, perhaps the most intellectually honest perspective. Seek fairness.

That you will be a teacher is in concert with these imperatives. One might find happiness in the nuances of living intensely and attentively, one's internal eye fixed largely outward.

Thanks for sharing, Kari. Though I can barely imagine the difficulties you face everyday, I have faith you'll make it through. Press on! You may even look back one day in gratitude for the trials that molded you into who you were made to be.

Hmm, that was supposed to sound a little more meaningful and less fluffy. I blame your pumpkin. It is a masterpiece and it is distracting me.

To add to the quoted lyrics...

"You'll get by, you always have before."

Also, I really think faith is key. Faith in the idea that this is a big, ugly obstacle that you will overcome. Faith that you'll be fine, even if your timeline has had a little hiccup. Faith that there are a million other people who don't know where their lives are headed (and I'm guessing a lot of them don't like uncertainty any more than you). Faith that life throws curveballs at the people who "know" where their lives are headed.

Eh, I'm really not the advice-giver in the family. I'm just here for the jokes. :) This is a day late, but: Why didn't the witch like the skeleton? Because he had a hallow-weenie!

For what its worth we love you and you can always stop by for hugs. I'd call first because we may not be home, but whenever we are our arms are open to you.

nona - yay! you picked a name for yourself! thanks for making my life a bit easier. i don't think your prose has been stilted, necessarily. just... thorough.

i think you make excellent points here, and i'm glad they'll stay here for a while, so i can come read them again when i'm ready. for now, resolution is far beyond my capabilities, as i'm having trouble not letting myself sink ever deeper into this hole.

anon - see how good nona was about choosing a name? you could do so too... a name like, oh, i don't know - ladybug? that's a nice name.

thanks for the encouragement. i'm sorry my masterpiece pumpkin distracted you, though. well, not really...

seeser - i know i'll get by. as you say, i always have before. the trouble is that for now, i mostly don't want to. i don't want to get by, or get better, or take care of myself. i want to just disappear. having faith that i'll survive this is actually not what i want at all right now, which is not to say it's not what i need.

kevin - awwww... thanks for the offer. i will most definitely keep it in mind. and maybe at some point i'll head to hustle with you guys, just to get out of the house.

What a lovely post. I found so much truth in what you were saying. Isn't the quarterlife crisis a bitch?

...and by the way, love the teacher costumes! I am definitely an English geek, because I laughed for about five minutes at that photo.

lilit - thanks so much for stopping by. i do enjoy your writing an awful lot, so i'm honored by any compliments you send my way. glad to hear you enjoyed the nerdy english humor - we certainly found it amusing.

and "quarterlife crisis" eh? i'd never considered that, but perhaps you're onto something there...

tpiglette - yes, how could we forget that face? that dark, scary night, where ladybug and i wandered through the gloomy hallways of branner, listening to the absolute silence of a not-yet-inhabited dorm, trying in vain to focus on our flyering task, when all of a sudden, we turn a corner and see... 0_0

thanks for the hugs. i miss you all too. you, eric, and i should get together at some point. and we'll leave an empty chair in honor of bug, too.

this really is late...and.. i dont know anythign about this blogspot or.. the website or anything.. i just got here randomly..(google)anyway... since it's rly late now.. im hoping ur feeling better =) and i'd like to tell you, you'll be fine really.. i've been moving around countries and i rly have an un-clear future, though im a top student.. i really dont know what's gonna happen next, im moving countries in a couple of days, i don't know where im studying, i have a very breif idea of wat im gona study, no idea of wat im gonna become, and no clue what my family's house is going to be like. just an advice: take advice from family and the loved ones who also know about life. and find someone who will be next to you no matter how ur future is gonna be.. and rly.. u'll just have to be okay with it, u have no other choice.. i have no idea what's waiting for me... and my liufe here is great, friends nd all.. i can't imaagine all that going away in less than a day, btu it's gonna have to happen.. so.. goodluck and keep hope and keep telling urself its okay because u have no other choice =)