I swear, one of these days I will run out of things to say about Africa. Not that I expect that day to be soon, necessarily, just that it will come eventually. Oh, and I'm sorry that MALARIA post was so long, but let's just keep in mind that that is the kind of thing that probably (hopefully... dear God PLEASE) only happens once in a lifetime, so I should be allowed to take as long as I damn well please to tell the story. Thanks to the six of you who read the whole thing, or at least enough to pretend you read by commenting.

As I've mentioned, during the weekend in between our two weeks of working in Africa, we took a mini retreat as a group to Lake Malawi. We actually talked a bit as a group about feeling guilty for what was, essentially, taking a vacation in the middle of what was intended to be a service trip. But the thing is, by the end of a full week working with the kids, visiting hospitals, talking to villagers and local students, etc. - well, we were just burned out, both physically and emotionally. We began to realize that if we *didn't* have that break in the middle, we probably wouldn't be able to continue working through the second week, and we had a lot to get done that second week. Plus, the time was good for us as a group, because it was a change of scenery and a chunk of time set aside for us to bond with each other in a relaxing setting. So with only minimal guilt, we enjoyed a beautiful weekend at Lake Malawi: 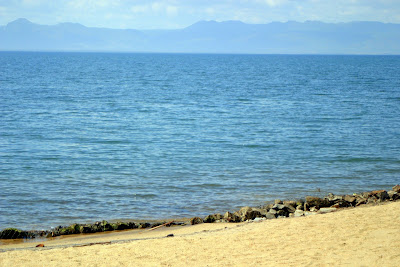 After a very long bus ride (okay, admittedly, it wasn't a long bus ride for ME, but that's because I was riding in a car. Keep in mind that less than 24 hours earlier I had been in the hospital, possibly for MALARIA, so I rode along with our hosts in their car while everyone else endured 4 hours on a crowded bus) we arrived at Lake Malawi and were greeted with that view up above. GORGEOUS. The coastline on the opposite side is actually Mozambique. We got to have devotions here every morning and evening. Some of the students woke early on Sunday morning to watch the sunrise. Such an amazing setting. 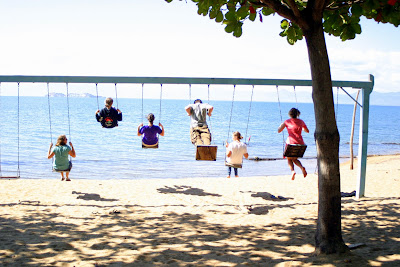 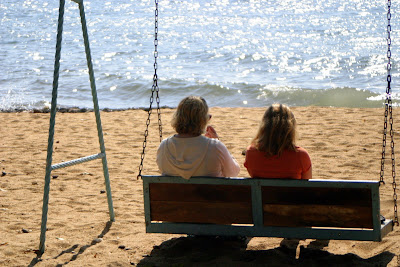 ... but especially with such a great view.
There's not much to say about the weekend at the lake, because most of it was really just hanging out and refreshing ourselves for the next week. A nice deep breath in the middle of a hectic and challenging trip. When we left on Sunday, we all felt a little more ready to finish the trip strongly. Oh, and on the way back to Blantyre we stopped at a nice hotel in the mountains for lunch. Talk about a gorgeous view: 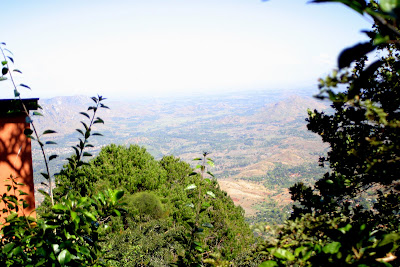 Less picturesque, but slightly more amusing: baboons that will steal your food right off your plate if you are not ever-vigilant! 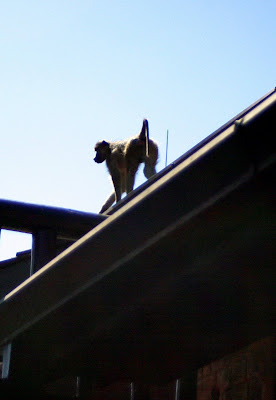 Seriously, stupid monkeys would take it RIGHT OFF YOUR PLATE.

And then it was back to work with the kids for another week before heading home. But of course, a very important part of that second week was MY BIRTHDAY! A student had given me a present on the last day of school, telling me that I was not allowed to open it until my actual birthday, and so I had to bring it with me to Malawi. It was easy enough to pack, so I brought it with me and opened it the night of my birthday: 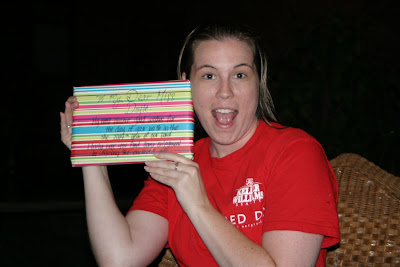 Yeah, my hair is wet, so what? I HAS A PRESENT! 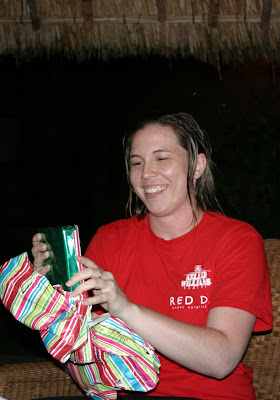 Wet hair only proves I do, in fact, shower occasionally. 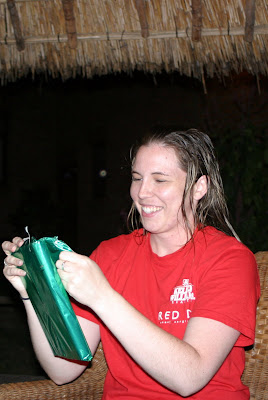 For those counting, yes, this is the second layer of wrapping paper. 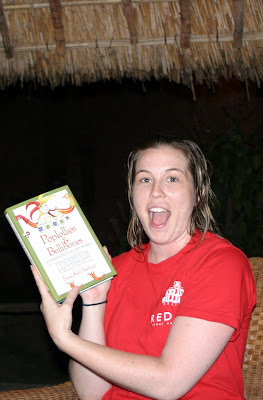 But beneath all the paper was a book! About words! English teacher WIN! 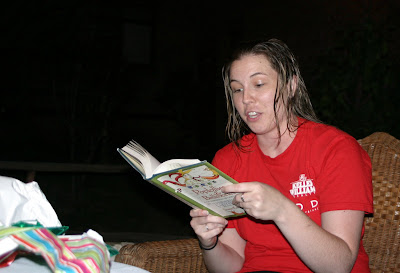 Sharing some gems from the book with those around me. 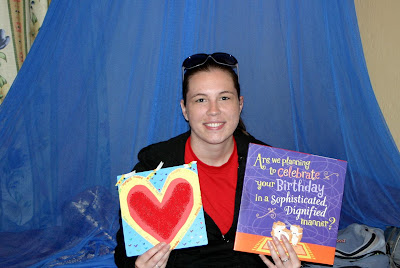 No, hair did not magically dry. Picture is from earlier that day, posing w/bday cards from students.

Tpiglette, my dearest BFF, also sent me two birthday cards, of which, unfortunately, I do not have pictures. The first one was amazing, though - on the front, it said something like, "For your birthday, you're going to get exactly what you deserve..." And on the inside, it said, "A big HUG!" with voices talking about bear hugs. (I know, you're wondering what is so great about that card, but I'm getting there.) What was amazing, though, was that she had arranged with the students that when I opened the card they would all swarm me and attack me with hugs! I don't know what I was expecting when a group of about 16 teenagers all stood around staring at me while I opened the card, but near-death by hugging wasn't it. I was laughing so hard, and when I read what Tpiglette had written on the card, it said those hugs had followed me from across the world, just waiting for my birthday. And later I got a second card from her that did not include teenage hug monsters but was still a very cool pop-up card. Thanks, Tpiglette!

I think that's it for this installment. Probably just one more Africa post to come - the one with all the pictures of the adorable kiddos we worked with, and my thoughts on how I can keep Africa in my heart now that I'm home. Thanks for being with me on my journey!
Posted by Lara at 11:17 AM

Does your school make a big to-do out of everyone's bday?

fjd - Certainly the school as a whole doesn't make a big deal out of birthdays, but individuals or small groups often do. On this trip, two students and I had birthdays, and for all three of us there was at least one birthday card and at least two rounds (different times during the day) of "Happy Birthday to You!" Also, on Saturday night at the lake, the restaurant brought over a birthday cake with candles that we all shared. I just happened to luck out and get a second card from a student, a present from yet another student, and the two cards from Mrs. Tpiglette. I am well loved, indeed. :)

I'm reading all the way through, and not noticing any such nonsense as your posts being "so long". I'm really enjoying hearing about your trip, maybe especially because I'm traveling too. So write all you like!

Awww, tpigglette, you're so sweet!

Did you ever think - a year ago - that you would be here? Now?