[This post was written by Kenneth of Single in San Francisco. If you're not a reader of his blog, you should be. And that's all I'll say about that.]

On Saturday December 20, the day before winter solstice, in a little quaint café in a college town in Northern California, two bloggers met. One of them is Lara, the owner of this blog. The other is me.

I stumbled on Lara through another blog we both followed. She left her little footprints there as comments, so I traced her back to her ongoing Life, told in words and photographs (and shoes). As it turns out, she lives less than 100 miles from me. So I suggested a meeting. Lara graciously agreed. 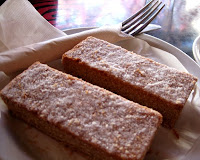 This post, written with Lara’s blessing, is an account of our afternoon together, a supplement to her chronicle, if you will.

Fifty minutes after the appointed time, with one Latte and two shortcakes already under my belt, I became convinced Lara wasn’t going to come. Then my cell phone screamed.

A few minutes later, Lara slipped into the café wearing a pair of large, round sunglasses, the kind celebrities wear when they want to avoid the paparazzi.

“Hi, Sleeping Beauty!” I greeted her.

In my email, I’d told her I wanted to visit the Stanford campus but wasn’t sure if outsiders were permitted. She assured me we wouldn’t be escorted out. Besides, she’d attended graduate school there, so she argued half of us rightfully belonged there.

In the garden area strewn with yellow leaves, we came across a tall cypress tree with a wooden box (whose purpose wasn’t clear to us). Opening the box, Lara discovered a yellow post-it note proclaiming an insult to Stanford—“Go Bears!” (a reference to Oski the Bear, the mascot of an athletic team associated with Stanford’s archrival, UC California, Berkeley).

Lara ground her teeth as she shoved the offending note into a trashcan.

“You’ll have to put something back in there,” I suggested. “It has to be either extremely ridiculous or extremely profound.”

On a blank piece of paper, Lara started scribbling “Fire and Ice,” a poem by Robert Frost:

Some say the world will end in fire,
Some say in ice.
From what I’ve tasted of desire
I hold with those who favor fire.
But if it had to perish twice,
I think I know enough of hate
To say that for destruction ice
Is also great
And would suffice.

Lara’s face lit up when we talked about Mr. Darcy, not the hero of Austen’s novel but her student who played this character in a stage production of Pride and Prejudice. She was incredibly proud of the young actor.

“He was reading in the parlor,” Lara recalled. “The girl [who played Elizabeth Bennet] asked, ‘Isn’t it a fine day?’ He put down the book and said, ‘It was.’”

Lara imitated the way her protégé portrayed Darcy’s haughty, dismissive air, followed by a peal of laughter that was entirely her own.

Then she led me to a little circular area next to the Memorial Church. Here, she asked me to stand in the center of what looked like a miniature Stonehenge.

“Say something,” she urged.

I couldn’t think of anything profound, so I picked the silliest lines that came to mind.

Lara giggled as my voice turned into a series of echoes. 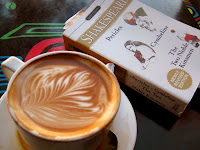 It was a gray winter day, with an overcast sky, a prelude to the evening showers. As we strolled through the sandstone arcades, our conversation meandered from topic to topic: Shakespeare’s Twelfth Night, Hamlet’s famous existential soliloquy (“To be, or not to be …”), different interpretations of Abraham’s willingness to sacrifice his only son Isaac in the Bible, among others.

I’ve always feared blogging could become a trap. Its safety is all too appealing. It’s comfortable to connect through a computer monitor, through carefully crafted prose, without the messiness of human relationships. But if I don’t make the effort to meet someone in person, I’ll miss the chance to forge a bond that could outlive my words.

With apologies to Frost, I give you these lines, inspired by my meeting with Lara.

Some say the world ends tomorrow,
Some say the day after.
Some bonds may burn in fire,
Some lost in freezing winter.
Some bonds may melt in sorrow,
Some in hatred or desire.
In case I live forever,
Long past the days I borrow,
I’ll treasure my summer,
Even the bitter snow,
I’ll step outside my window,
I’ll walk on ice and fire,
From Babylon to the Congo,
Wherever I inspire.

(In return for this post, Lara agreed to pen something for my blog Single in San Francisco. I hope you’ll stop by to hear her account of our time together.)
Posted by Lara at 5:38 PM

I have loved meeting some of my blogging buddies in real life, and I hope to be able to meet even more this year.

I’ve always feared blogging could become a trap. Its safety is all too appealing. It’s comfortable to connect through a computer monitor, through carefully crafted prose, without the messiness of human relationships.

I never thought of it like that, but I see it now.

I love the idea of meeting some of the bloggers I have met....although there aren't many blogs I follow, the writers have become something unique and special in my life. I can't wait for the day when I get to meet a blogger in real life....

I've read both of your posts and must say I really enjoyed them both!