They Say It's My Birthday

When I was 17, my sister threw me a surprise birthday party. It was in August, two months after my actual birthday, but we'd both been busy earlier in the summer. After all, my father had died in April, and with AP tests and SATs for me, plus college finals and term papers for her, followed quickly by getting jobs in the hopes of keeping our house - well, we were busy, as I said. But by August, she decided it was time to celebrate my 17th birthday.

At the time, I was actually housesitting for a friend of mine, whose family was out of town on vacation. One day, I checked the answering machine and found a message from my friend Stephanie, outlining the party plans - the when, the where, etc. - and inviting the friend whose house it was. Clearly, there was no surprising to be had, because with that message, I knew about the party.

How exciting! I thought to myself. I had always wanted a surprise party - in fact, I'd really just always wanted a big awesome party at all. In the aftermath of my dad's death, I needed an excuse to be a teenager again, to have fun and laugh freely. And a big part of me just didn't want to be alone anymore - I wanted to be surrounded by my friends. I wanted to feel loved.

I had to work the night of the party; at the time, I worked at a local pizza parlor, and on nights when we weren't busy, I often got to go home early. I figured Seeser had arranged for me to be let off work early that night, to get home and find all my friends waiting to shout, "Surprise!" My mom was also in town from Las Vegas, so she would be there too. All through work, I waited in the hopes of being released - after all, it wasn't packed or anything. But then, suddenly, we were hit with a huge rush of people, all apparently needing a pepperoni fix right now! Sighing, I resigned myself to being late for my own party.

Seeser called to ask how long it would be until I could come home, and I told her I hoped it would be soon. I got back to work, and soon, things began to settle down. Just as I breathed a sigh of relief - I wouldn't have to miss the party! - I saw my mom and sister walk in. With them were my mom's boyfriend and one of my friends from church. They carried a cake, and I frowned, confused at their appearance. Had they just left all my other guests at the house to come get me?

I got a sick feeling in the pit of my stomach as I went to their table to see what was happening. My sister had been crying, and my mom looked like she felt sorry for me; her boyfriend and my friend just looked uncomfortable. And that's when it hit me: 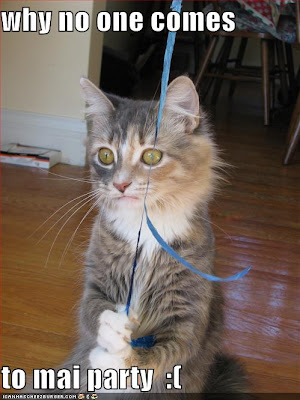 Cute kitty pictures aside, I was devastated. I sat morosely through a feeble rendition of "Happy Birthday" there in the restaurant, and maybe ate a slice of cake - I can't remember. I do remember that when we got home, I walked through the house, looking at the streamers, the balloons, the platters of snacks - everything Seeser and Mom had set up for me.

These days, I have a bit more perspective than I did then, so I can understand that what happened wasn't a negative reflection on me. I know now that part of the problem was poor planning - invites went out late, and many folks who might have come were out of town or already engaged with other plans. I also know that many people who should have been invited weren't because the people Seeser depended on to help her completely flaked. I know that I did have friends who cared about me, and the fact that they weren't able to come to the party - for whatever reason - didn't change that fact.

This year was shaping up to be another bad birthday in some ways. Oh, I didn't need anything huge - I'm a grown-up now and I don't need the world to stop just because I happen to get a year older. But the recent move and job hunt bumped planning some sort of birthday celebration pretty far down my priority list. I wanted to plan a group outing to the beach boardwalk, but I didn't get to it in time. I figured a better last-minute plan would be getting a bunch of folks together for a night at the local comedy club, but everyone was busy or out of town. Eventually, I reconciled myself to a non-celebrated birthday.

Last night, I went over to Batman's for dinner with him and his housemates. We had a tasty meal of steak, rice, and corn on the cob. It was nothing out of the ordinary, but it was good to spend time with Batman, as he'd been swamped with work lately, and I'd begun wondering if he would ever emerge long enough to even remember who I was. And then, wouldn't you know it, he caught me completely off-guard.

After dinner, Batman walked in from the dining room, carrying in his hands a cake covered in glowing candles. Written on the cake, in bright red frosting, was "Happy Birthday, Lara!" He and his friends sang to me as I fought back tears of joy and surprise. Then I spent a good deal of time trying to blow out a bunch of stupid trick candles, but who can begrudge him a little fun at my expense? I mean, this is the man who surprised me with a birthday cake when I'd just about decided to forget my birthday entirely and stay 25 for another year. Friend O. mocked Batman for the less-than-fancy cake with a random assortment of bright colors: "What, did you get it from the dollar store or something?" Batman jokingly replied that it was the two-dollar store, and O. turned to me. "But it's the thought that counts, right, Lara?"

And I told him, "You know what? It totally is."

Thanks, Batman, for a wonderful surprise. You constantly make me wonder how happy one girl can really be. 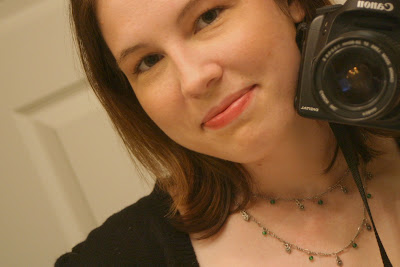 Happy Birthday! May 26 be filled with all the fun things that being a 'real' adult has to offer!

As always your writing is such a wonderful gift, I could read it forever.

Wow I am CHEESY!

Happy birthday! Jeez, there are a lot of birthdays this month.

You are SO beautiful.

You know what? A birthday is just a random date on the calendar. There's no reason why one can't celebrate one's presence on the planet on ANY day; each new breath is a chance to start over, and each new day is cause for celebration.

Happy birthday, Baby. I hope it just keeps getting better.

Happy day! You look just beautiful in that picture, too.

OMG this exact same thing happened to me, except it was my 16th birthday party, and my mom had invited the whole band I was in, or so she thought, only 4 showed up, seems my best friend forgot to invite anyone

I love that he came in with a cake - especially with the fun never ending candles!! Happy Birthday!

Ok, I'll say it over here, too. Happy birthday, Lara!

Lousy birthday celebrations are horrible, plain and simple. Birthdays may only come once a year, but it's the one time you're allowed to be queen for the day. To have other people just blow that off can really sting.

June is a big month for birthdays, apparently.

Mine is next Wednesday, and in the past 4-5 days, there have been just as many birthdays for me to celebrate.

Happy Birthday. You're still a 20 something. . . so everyday is still beautiful and PERKY! LOL

In my experience, after 29, it seems like birthday celebrations really don't matter as much as they once did.

Wishing you the best 26th year!

Oh, sweetie. That story was so beautiful, and so well told! I'm so glad I took the time to read it.

Happy birthday! Sometimes boys can get it right! :)

Your "party" sounds like every single birthday (and graduation) party that anyone's ever tried to plan for me. But I also didn't have many friends, so I guess that's to be expected. Better to just enjoy a quiet dinner at home with the ones you love.

(I will never get a surprise cake because I enjoy making my own!)

I'm so sorry to be so late -- but still Happy Birthday and cheers to a great year!

hup hup hupppy birfday!!!!!! It sounds like Batman rocks, I am so happy for you :)