Another One Bites the Dust

All right, I'm going to have to give a little backstory here, because not all of you have been around for the ongoing reptilian drama that takes place in my automobile. (If you're heard all this before, you can skim until we get to the new stuff.)

Once upon a time, I had a beautiful blue friend named Iggy. Iggy was a lively lizard who enjoyed roaming my car at his leisure, hanging out on the dashboard: 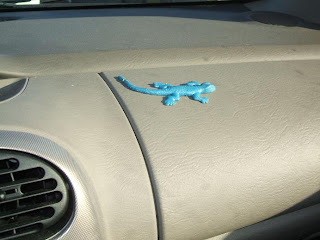 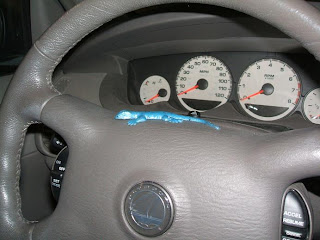 Or even helping with the gear shift: 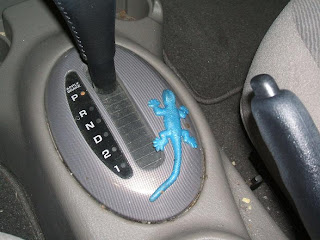 Iggy was a good lizard, and a good friend. But then, sadly, Iggy died: 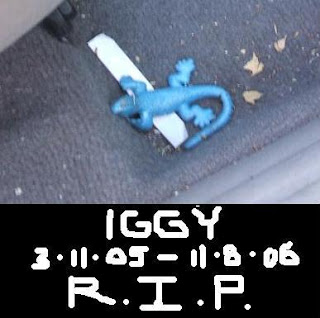 (Let's have a moment of silence for our dear departed friend.)

But life goes on, and Fourth Breakfast was so kind to introduce a new friend into my life (and car), and he was Ramon! 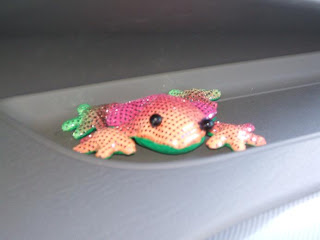 As you might guess from his rainbow sequined appearance, Ramon is a 24/7 fiesta, and he is great fun. Thanks, Fourth Breakfast!

Not too long after Ramon came along, Lady M brought yet another new friend. Melvin (look at update #4) wanted so much to be a good guard lizard for my car, and so he took the pseudonym "Spike," but really, he could never escape his Melvin-ness. Here we see him on the steering wheel, just like good ol' Iggy: 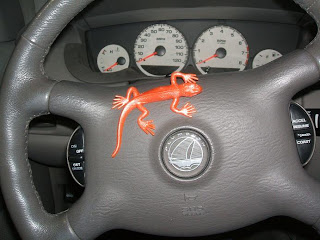 He and Ramon hit it off right from the start, the best of friends: 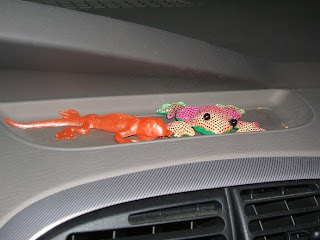 And I think that's about where we last left our story.

Everyone is caught up now? Good.

So Melvin and Ramon learned to coexist quite peacefully... or so I thought. They would move easily through the car, sometimes sharing space, other times each finding their own little hidey-holes. It seemed like a 4-door paradise for the little critters.

And then one day, I opened one of those doors to a gruesome scene. It was beyond my comprehension, honestly. By the time I snapped this picture, the scavengers were already at work.

(If you have a weak stomach, I implore you to turn away.) 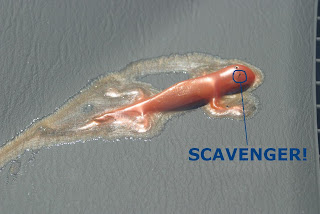 Yes, that's right folks. He is melting. He has been LIQUIFIED! His arms and legs have fully melted off, and now he's just a slug: 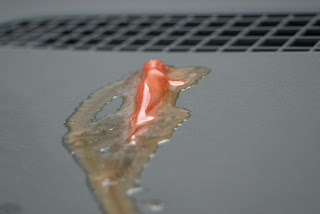 Look at the trail of life just oozing out of him: 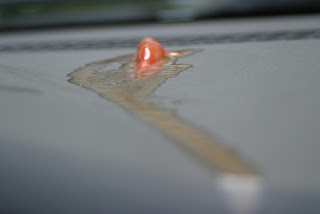 These grisly photos should be enough to convince you of the heinous nature of the crime.

"And where is Ramon during all of this?" you might ask. Oh, he's around, just minding his own business. But don't you think he's looking rather smug these days? 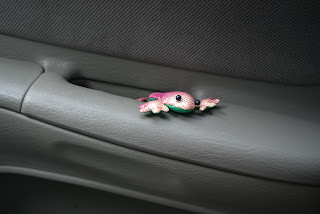 Frankly, I'm afraid to be alone in the car with him... 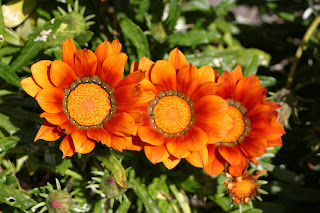 Such a heartwrenching story!! At least you still have Ramon. but if I were you... I'd watch my back!! (it's those beady eyes!!)

That Ramon looks rather shifty. If I were you, I'd invest in a stork or a heron. They love them some frogs. Scare Ramon straight. Y'gotta be FIRM with these frogs or they'll run all over you.

I'll bring you the remaining pair of Spike's compatriots. They should be able to hold their own.

Sorry for your loss.

If Ramon could whistle he'd be whistling that sort of carefree, I've done nothing wrong cat ate the canary after several years of peaceful coexistence type of tune. Busted. No question who the perp is.
Next order of business...can you get that ooze that was Spike off your dashboard? Or will their be a Spike-like slick there forever?

Maybe Melvin could've used a little sunscreen? Or at least a sun parasol? You might supply future lizard friends with those umbrella thingies that come on fruity mixed drinks.

Or maybe Melvin self-identified as a banana slug all his life (still not an accepted lifestyle choice among the plastic lizard community, even after all the pride marches/crawls) and finally broke free of all the narrowminded plastic lizards pulling him down.

Or, yes, perhaps it was Ramon on the dashboard with the hair dryer. I'd check the dashboard for a secret passage to the library. If you ever hear the nefarious sounds of a hair dryer being turned on, run -- actually, a non-zero mean drift is probably sufficient, so: non-zero-mean-drift for your life! Unless you have wet hair to absorb the hot air of doom.

Girl, you have way too much time on your hands!

I never relayed my mom's lizard story - a real lizard lived in her car, and we could never get ahold of it when it would finally appear. Apparently it lived in her car for almost a year because it appeared long after we figured it died or it had gotten out somehow.

She finally sucked it out with a shop vac and then emptied the dirt collector to let it out and it scampered away. eeeeek.

I'm sure Ramon had the best of alibis... I mean look at him all smug in that picture.
Doesn't he kind of remind you of those frogs from that old beer commercial? Maybe he thought that Melvin reminded him too much of the lizard in the Geico commercials. He was upset that his 15 minutes of fame were up.
Be Careful!

(As part of an open investigation, in the following eye-witness account some names have been changed to protect the innocent...)

"This Lizardy guy he was like all over Froggie, talkin' smack about his mother, and how his sort should just go back where they came from. Froggie was just ignoring it when that dirty low-down Lizardy came up behind him and tried to take a swing. It was only in self-defence that Froggie emptied 12 rounds into Lizardy, poured acid all over the corpse, and danced around the rapidly liquifying mess to the tune of Steeler's Wheel singing Stuck In The Middle With You."

Thank you for a much needed laugh! And thank you to aussie boy for his addition!

OK, I found who might be a great next car pet. I can't for the life of me (and I have been trying for at least 5 whole minutes) figure out how to put a picture in a comment. If you want me to send you the pic, I will! I will even post him on my site so you can find him!

OK, I confess, the guy I found for you was a figment of the Internet. I found him in a google search for stuffed lizard. I have, though, commented on the post from which the picture originated and asked where they got said lizard. I didn't mean to be a tease!!

r u serious? - oh trust me, i'm watching myself very carefully these days.

major bedhead - ooh, a stork! excellent idea! i could also get a frenchman - don't they love frogs, too?

lady m - you still have them? that's awesome! bring 'em on - maybe strength in numbers will keep them alive.

cce - oh he *can* whistle. and he *is* whistling. and doing that shifty eye roll like he's just casually looking around on a nice day. i'm hoping i can get spike's remains off the car without too much trouble, but we'll see.

meena - you crack me up. sun parasols are a good idea, but they definitely would have gotten in the way of his "spike" image. if i hear a hairdryer, i'll hit the road quick.

nutmeg - of course, the funny thing is that i definitely do NOT have too much time on my hands. in fact, i have little actual free time on my hands. i just spend too much of my busy time on frivolous posts that make me laugh. it's because the laughter keeps me sane.

aly - i hope that was directed at ramon, because i did nothing wrong! it was all the frog's fault!

aimee - that is creepy and gross and i'll thank you not to sully my comments section with that filth ever again in the future. :-P

wolf lover girl - he DOES look like the budweiser frogs! though much more stylish, of course.

aussie boy - i will now have "stuck in the middle with you" stuck in my head with me all day. thanks for that.

ffbgirl - you're completely welcome for the laughs. anytime. and thanks for the pet option! i'll have to find out where to buy one of those little guys...

Oh dear, what a sticky end for Melvin. Despite his hot, latino name, Ramon is from Hawaii. He is used to warm and humid places. I'm sure he thought it was a joke when Melvin said it was too hot. :)

fourth breakfast - no, ramon has told me in no uncertain terms that he's from montevideo, uruguay. he may have been posing as a native of hawaii, but he's south american, no question about it. :-P

Too freaking funny. I love the continuing saga.