2. crumby - "It's really too bad that so much crumby stuff is a lot of fun sometimes."

3. damn near - "I was damn near bawling, I felt so damn happy, if you want to know the truth."

4. lousy - "... we decided we'd take a bus into Agerstown and have a hamburger and maybe see a lousy movie."

7. they/it/he/she/that kill/kills/killed me - "He said he talked to Jesus all the time. Even when he was driving in his car. That killed me."

9. Chrissake - "Up home we wear a hat like that to shoot deer in, for Chrissake."

11. flitty - "I wondered if just maybe I was wrong about thinking be was making a flitty pass at me."

Links to other Thursday Thirteens!

(leave your link in comments, I’ll add you here!)

Get the Thursday Thirteen code here!


The purpose of the meme is to get to know everyone who participates a little bit better every Thursday. Visiting fellow Thirteeners is encouraged! If you participate, leave the link to your Thirteen in others comments. It’s easy, and fun! Be sure to update your Thirteen with links that are left for you, as well! I will link to everyone who participates and leaves a link to their 13 things. Trackbacks, pings, comment links accepted!

Day 18 of SaBloBoMo: The Catcher in the 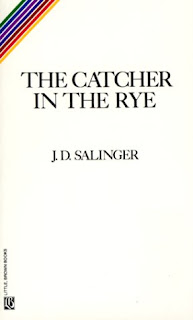 Yeah, that's right. I'm going to do a book I don't like. Because it was just too perfect a fit to not do the book on the day I talk about it in my Thursday Thirteen.

Everyone I've talked to about how much I dislike this book has been shocked. "You didn't like The Catcher in the Rye?! How is that possible?!" Well, I'll tell you how it's possible - I hate Holden Caulfield. For those of you who don't know the book, it is basically the rambling prose of a melodramatic, self-centered, whiny, obnoxious sixteen-year-old boy named Holden. He is everything stereotypically awful about the emo teen (see the fifth definition). I want bad things to happen to him, just so he'll shut up already, stop whining, and get over himself. And it's not just about Holden. I hate reading my own diaries from when I was that age, because I was just like that. It's ANNOYING.

However, I have to teach this book to my students. And I can do that, because this book actually has a lot of good qualities, from a literature perspective. Most importantly is this: With nothing more than words on a page, J.D. Salinger has created a character so lifelike that I actually want to beat the crap out of him. For me to feel a visceral dislike of someone who is not real is quite an accomplishment. And for the multitudes of teens (and non-teens, for whatever reason) who really associate with Holden - who feel his pain - it's similarly effective. They feel a genuine connection to someone who does not exist at all, except between the covers of a novel.

That, my friends, is damn good writing.

It's been years since I read Catcher in the Rye, so I'd forgotten the obnoxious repetitions. Thanks (I think) for reminding me. Maybe someday I'll go back and see for myself. In the meantime, I trust your judgment!

I have never read that book but I liked your list

don't you love it when you want to throttle characters?

You have the second TT that I've read this week that talks about books...and that's a good thing! It has been forever since I've read this too...but it certainly was a different way to remember the book.

Apparently I need to read this book. Hanging out with English teachers, it seems to be some sort of requirement. That, and "Lord of the Flies," which I also haven't read.

california teacher guy - oh yes, very obnoxious. and there are good things about this book, from a literary perspective, so if that interests you, i definitely recommend a second look at some point. just realize that you WILL want to strangle holden.

amy - never read it? good for you. keep it that way, if you can.

sassy - oh yeah, i love it. LOVE that "please let me hurt you" feeling.

bubba - must be a book week, i guess. hah - a "different" way to remember it, indeed. how do you remember it?

teacher anonymous - no, you don't. you don't at all need to read it. and i've never read "lord of the flies," so it's definitely not a prerequisite for this english teacher.

eric - word. that doesn't surprise me in the least. :-P

If you hated Holden Caulfield then you've got a better grasp of the novel than those clueless teens who worship the book and consider Holden their hero.

The point is that we are supposed to hate him. He's unable to reflect on himself and blames society as he's unable to recognize his own "phoniness." Basically, when you point at finger at someone, you have three fingers pointing back at you. That's one of the themes of the novel.

yes holden is annoying, but the book was written through a freudian point of view. the reason holden is irksome is that he is actually suicidal. (that is why he ends up in a mental hospital.) I personally did not see this book as anything that great, but it is definitly an interesting book to do some pyschoanalysis.