So around 6:00 am, they brought me a wheelchair and I hitched a ride two floors up to the voluntary wing of the psych unit. We filled out paperwork and answered lots more questions, they checked my bag for items to confiscate (which really just means J. took my bottle of Advil home with him), then got me settled in my room (fortunately, my roommate was able to sleep through it all). J. was great – he had stayed with me all night, giving up yet another night’s sleep for my sake, and finally took off sometime approaching 7:00 am.

After only a couple hours of sleep, I had to be up for more tests and meetings with various doctors. According to my diagnosis sheet (which I got when I was discharged), upon admission I had “depressed mood, low energy, [and] guilty/hopeless feelings.” I was also “notably withdrawn” and (this is my favorite part) “psychomotor retarded.” I have decided “psychomotor retarded” is my new favorite phrase, and I’m going to get it printed on a t-shirt and wear it proudly.

At any rate, in addition to my psychomotor retardation, I was also only at a 20-25 on the Global Assessment of Functioning Scale. This puts me in this category: “Behavior is considerably influenced by delusions or hallucinations OR serious impairment in communication or judgment ( e.g., sometimes incoherent, acts grossly inappropriately, suicidal preoccupation ) OR inability to function in almost all areas ( e.g., stays in bed all day, no job, home, or friends ).” I had no idea I was so bad off when I got there, but either I was and didn’t know it, or my doctor is very melodramatic. I have a sneaking suspicion it’s the former.

That first day was really hard. It certainly didn’t help that I was exhausted from the ordeal of the previous night, and I dislike being alone in unfamiliar situations anyway. I spoke to absolutely no one during meals, and in the one group session I attended, I spoke only as much as I had to, which was to say my name and something I’d always wanted to do but hadn’t done yet (I said to be a published writer). I was very quiet with all the doctors even. I still didn’t care much about getting better or doing anything to help make that happen. 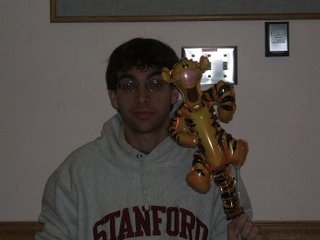 J. came back to see me that night during visiting hours. He brought me some things from home, and a little Tigger balloon, “the epitome,” he said, “of boundless, unjustified enthusiasm.” Despite the fact that company was nice, I still wasn’t in a talking mood. We mostly sat in companionable silence watching Celebrity Jeopardy (the real one, not the SNL version, though the real one actually had a category called “Shiny Things,” which really seemed more like a joke anyway). When he left, I took the first step towards de-isolating myself, telling him he could tell Tpiggy about what had happened and where I was.

Things started getting better the next day. I actually started talking to some of the other patients, participating in group therapy, making an effort to improve. I found some smiles again, and life started to seem a little less hopeless. I started opening myself up to having some other visitors, trying hard not to let myself become isolated again. As it turned out, some of those visits proved to be the biggest keys to my recovery, though I hadn’t realized before how badly I’d needed them.

Therapy was helping a lot too. I was learning new ways to think about my emotions and my thoughts – better ways to cope with stressors and come to good decisions about taking care of myself. And the other patients were working with me and we were all supporting each other through our various struggles. I was really seeing how good the hospital could be for me, and how good it was that I had come. It might have been better to have come on my own, without the ER trip… But however I got there, it was good.

By Monday and Tuesday, though, I was definitely ready to be heading home. Hospitals are not actually very good for getting a lot of rest, so I was getting tired of not having enough sleep. And the food is really as bad as everyone always says, so I wasn’t eating much – when I got home and weighed myself I discovered I’d lost about five pounds, bringing me down to 144, a number I haven’t hit since sometime in high school. And despite the support structure of the other patients, I was lonely for home and my familiar environment. I was ready to go.

My diagnosis on discharge was a “major depressive disorder” with “self-injurious behavior.” My GAF rating was up to a 60-65, which is: “Some mild symptoms ( e.g., depressed mood and mild insomnia ) OR some difficulty in social occupational, or school functioning ( e.g., occasional truancy or theft within the household ), but generally functioning pretty well, has some meaningful interpersonal relationships.” All in all, not out of the woods, but doing much better.

So now I’m home, and working on recovering. Lots of schoolwork to catch up on, but I’m not letting myself stress about that yet. I still need to work on getting healthy and feeling better before I can do that, and while I may not need to be hospitalized anymore, I do still need to be working on taking care of myself. And that’s what these posts are, a part of my recovery. I’m a writer, and for me, that means it helps me to write it out, to share it with others, to explore what’s happening through words. It’s just who I am - it's how I work.

In the next post: Some of the more humorous moments in a week severely lacking in humor.
Posted by Lara at 6:14 PM

I have to echo Mocha, I respect you a great deal for these last two posts. Writing them alone would be hard, but putting them out there for "God and everybody" (as they say) to read, that's a great leap of faith. Well done, Lady.

Oh, and I have to admit, I laughed out loud at the idea of "psychomotor retarded" on a t-shirt, which I know is soooo inappropriate. (Does it help that I felt bad after I laughed? No? Well, daggnabbit.) And can I say that your friend J has the absolute BEST taste EVER? Tigger is the most perfect gift in that situation - I bet even Emily Post would agree.

But seriously, I hope things are getting better for you. You will certainly be in my thoughts. Hang in there, you hear?

Let me add my voice (um, or keystrokes) to those that are already cheering for you.

Your Tigger balloon would get along swimmingly with a dear friend of mine.

Do you ever write short stories? Your writing certainly has a good voice, and I need hardly add that you don't lack for experiences to fuel stories.

Ok, so I was diagnosed with "Major Depressive Disorder" with "Sub-clinical anorexia", which I think ties your diagnosis. But you definitely trump my "non-functional" with "psychomotor retarded"!

Grats on being unshackled...:) I love you and can't wait to see you tonight!!!

caffeinated librarian - thank you. i've been incredibly grateful for your support ever since your very first visit. and i don't think it's inappropriate to laugh at "psychomotor retarded," but then i have a warped sense of humor (as i said in post #3). so i say laugh it up, and don't even feel bad after you do.

mous - a cheer? for me? why thank you, i appreciate it. short stories have never really been my thing, but i have often considered tossing my experiences together, changing the names to protect the innocent (and not-so-innocent), and publishing a book. we'll have to see.

Sorry to hear of your recent episode. Glad to hear you are on the mend. I'll be praying for you.