[After the fact edit: I sincerely hope y'all got the allusion in the title and understood why it was appropriate to the post. You did, right? Okay, just had to make sure.]

I have a confession to make.

Much like Mocha Momma, I am a comment whore. It’s true – I admit it. I’ll do pretty much anything to get people to comment. For months now, I’ve been eagerly watching my comments, trying to figure out which posts elicit more comments than others, and how to get people to stop lurking and comment.

After the last few posts, I was beginning to wonder if anyone was even still reading. I mean, only one comment on the football post, and then two posts in a row with no comments at all. I was *this close* to just scrapping the blog altogether, since I figured all my readers had either given up reading or gone into the Witness Protection Program.

But apparently, you were all just waiting for me to ask you about your cookie-eating habits. Nothing gets a conversation going again like a debate about Oreos. I’ll have to keep that in mind for the future.

For now, however, we’ll move away from cookies and on to something completely different: hockey. 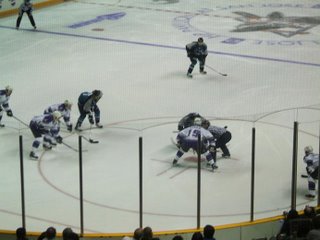 Fiance and I went to the Sharks-Kings game Friday night. It was an ugly game if you were a Sharks fan, but since F and I were both pretty neutral, we were just enjoying being spectators. I called Seeser to gloat a bit about getting to see a Kings game, but she was good-natured about it. Seeser and I used to be big Kings fans when we were growing up – it rubbed off on us from Dad. I can’t even begin to count the number of hockey games I’ve been to, and, like football, it’s a part of my life I sort of miss sometimes. So when we were offered the tickets (Fiance’s coworker’s wife has season tickets), I was excited to be able to go.

The game itself was, as I said, a bit brutal for the fans. 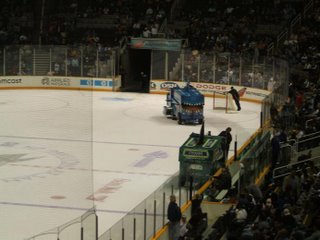 As pretty much a runaway game, it was only mildly interesting, and that only because it was so funny how inept SJ seemed to be. But hockey is good for providing other entertainment for fans, like the Zamboni machines, for example. Did you know they paint the Zamboni machines to look like monsters now? Neither did I, but I learned that during the torturously long 17 minutes between periods at the game. Watching the Zambonis is a time-honored tradition of many a bored hockey fan. 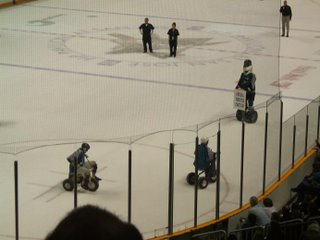 we have to kill before the game starts again, when they have silly contests and games. The participants are often small children who are, I believe, sold to the NHL by their parents to act as trained monkeys for the amusement of thousands of bored fans. Here we see three adolescents (they couldn’t have been more than 16, and that’s being fairly generous) in a tricycle race through a series of cones set up around the ice. Doug, on the blue trike, is about to win. George, on yellow, cheated around the first turn by skipping a cone, and was vociferously chastised by the crowd, and thus does not deserve second place, despite his actual placement. And poor Marcus, on the red trike, has fallen so far behind that he’s not even in the frame. But at least he was honest, not like that cheating a-hole George – he really should have been publicly flogged for his blatant disregard of the Humiliating-Spectacle-in-Public Rules of Behavior. After all, we still had 8 minutes and 39 seconds to go before the second period would start, and a good flogging would have killed that time really well.

But the best part of the night – the part that kept me going through every last second of those 17 minutes (34, since it happened before both second and third period) – was this. 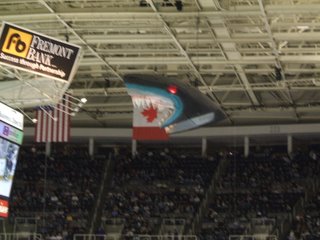 First, to HBM, Mary P., OP (sorry I missed you the first time!), and any other stray Canadians who happen to wander by my site, I’m sorry. I’m sure this sight must be painful for you – no one wants to see his or her homeland being greedily consumed by a man-eating (and apparently nation-eating) predator. But seriously, how hilarious is that? There’s a shark – a SHARK! And it’s eating – EATING CANADA. I could not stop laughing for probably the first ten minutes of the game, just staring at the shark, going after like it was deep fried and smothered in baby seal.

I just lost my entire Canadian readership, didn't I?

No worries about me: this Canadian never watches NHL hockey. Not even on television, and certainly not live, where seats in this town start at $50 and go way up.

I had NO IDEA about the shows between periods. Why is there a 17 minute break between 20-minute periods? That's just silly. Must be to allow for ads.

Even sillier? I do occasionally watch Junior A hockey because the arena is close and tickets cost $9 or so. That's not the silly part, this is: We have "Ice Girls"!. Little chickies who race out into the aisles in the stands dressed in tight yoga pants and crop tops, waving pom-poms! What are we, Americans, that we have to have flippin' cheerleaders? At a hockey game?? In Junior A, which does NOT have 17 minute intermissions, these silly girls have maybe 20 or 30 seconds to pop out of the gates under the seats during a break in play, bounce up and down a few times, and then pop back down - so as not to interfere with the game.

The 20-something guys in the stands, and of course, there are LOTS, enjoy them, but me? I shake my head. Good lord, you silly girls. Do you have any idea how ridiculous you look? Do your mothers know what you're doing? And if they do, what are they THINKING?

It's just so silly.

Yay! Sharks! (Except not yay for them Friday.)

I had to follow your comment from MGM because usually I am the "Kari" who comments. And.. I am in the Bay Area.

Sigh. I hate not being near an NHL game (no, the minor league crap doesn't work for me). I did treat myself to 6th row, center ice seats in LA for my bday last year, but I don't see that happening this year. I MISS HOCKEY!!! :(

This is a great time of year though...early in the football season, start of the hockey season, and the baseball playoffs. It's heaven.

aahhh..but you picked up a bay area one. i love your honesty.

I guess they don't have the big remote-controlled shark blimp that drops t-shirts anymore. That thing was cool. Can't find a picture of it, tho.

Cookies seem to drive comments. My cookie-dough post interested a lot of people, and by the way, we forgot to give you the frozen dough again!

Oh yes, you can find me at http://ventl8r.spaces.live.com if you so chose.

It would take more than a shark to scare me off. And in any case, like Mary P, I don't watch hockey, which probably makes me unCanadian.

to all: i added an edit to the beginning of the post, and included OP in the list of favorite canadians in the penultimate paragraph. in case you wanted to know. :-P

mary p. - wow, that's downright uncanadian (which doesn't flow as well as "downright unamerican," but you'll forgive me, i'm sure). the between-period time has definitely extended over the years, because i know it couldn't have been that long when i was a child. i never would have sat through that kind of lag. and it's funny you mention the cheerleaders, because a friend of mine was just saying the other day that ice hockey needed some of those... apparently the n.y. islanders have "ice girls," so your minor league is not so far from the pros. ;)

kari - when i saw this, i was totally like, "wait, i didn't comment, did i?" hooray for another bay area kari commentor! stick around, comment often, and we'll confuse the heck out of everyone! doesn't that sound fun?

seeser - i know you miss it, you poor dear. i got annoyed when all the nhl games moved to oln, so i stopped watching (also, we don't get oln). and i haven't really watched baseball all that much since the angels' deal with satan expired after the world series win, so i don't miss that. but you already know i loves me some football season. :)

jen - hooray for a new reader! the pressure's on to see if i can keep things interesting enough for you to want to stick around. my honesty, huh? it's good to know my blatant fabrications haven't become too obvious yet... ;)

mazurka - any "big, remote-controlled shark" would freak me out. dropping t-shirts would not have been enough to make me feel better. eating canada, on the other hand, would have.

ventl8r - "noodled over"? that's an awesome phrase that i'm going to steal and shamelessly pass off as my own. thank you for the style compliment - just watch and see how much my style improves with judicious use of the phrase "noodled over." and i guess i'm no longer a *closet* comment whore - i'm totally outed. :-P am going to check out your site now. :)

her bad mother - i repeat: that's downright uncanadian! (it's starting to roll off the tongue - er, keyboard - a bit better.) and yeah, knowing you (well, through your blog, seeing as how we've never met), i wouldn't expect a dinky little man-eating beast to scare you off anyway. also, i loves me the fact that you use the construction "i loves me" too. :)

and p.s. - this is my first post with double-digit comments. woot!

The education of Tali: I had to google the title of your post. Amazingly, I somehow grew up without ever seeing that movie, but at least forevermore I will know where that quote comes from =)

Why does everyone reduce the great nation of Canada to a few meaningless symbols? It seems like Canada is just made up of beer-drinking, hockey-watching, heavy-sweatered, friends of the Inuit. What about the maple syrup? What about the beavers? What about ice-skating? What about eating hotdogs on street corners in downtown Vancouver (a favourite pasttime of mine)?

All I'm saying is this: It's too easy to make fun of Canada and metaphoricallyfeed it to the Sharks. Try making fun of some other country like Portugal or the People's Republic of Korea. Expand your repetriore a bit.

Oh, now, now, OP. Given how much we Canadians mock Americans - you know we do! because it's so fun! and easy! - I think we can't object too much when it comes our way, too. As long as it's friendly, which this certainly was.

tali - the movie terrified me as a child (and for many years afterward), so it's probably best you didn't see it. but i'm glad you can now identify the quote. :)

op - well, the ice-skating can technically be lumped into hockey, but you're right about the others. how could i forget about the beavers? clearly you canadians have more culture than i realized. ;)

mary p. - you're totally right: mocking americans is fun and easy. i think that's why we do it so much, too. and yes, all mocking (of both canadians and americans alike) is in good fun. well, here it is, anyway.