Yesterday, I went to visit my old high school. Becoming a teacher has caused me to think about so many things differently, and I was eager to go back and see my high school with these new perspectives in mind. That was, of course, not the only reason – I would have gone no matter what. For those of you unaware, my dad taught at my high school from the time I was born until he died when I was 16, so I pretty much grew up there. The people at that school are like family for me, so I try to visit whenever I can. 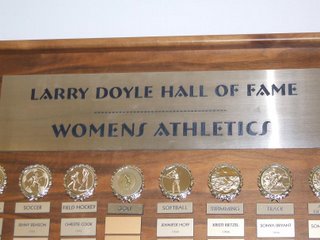 From the hallway of the administration building at my school. There's a "Mens Athletics" one next to this one, but I didn't think you needed to see both. I told you they remembered him.

Tears were beginning to creep to the corners of my eyes as I drove on, and then I passed Paul’s Coffee Shop, a little, hole-in-the-wall café owned by a very nice old couple. This was the place Dad used to take me on those special days when we would go to 6:30 mass before school. The place where we could spend an hour alone, just the two of us, getting to know each other a little better. The place where sometimes we would sit without speaking at all, because it wasn’t necessary to speak to enjoy each other’s company. The place I felt like I was just my dad’s little girl, and maybe – just maybe – that was enough.

And I started to sob.

I imagine some days will always be hard. 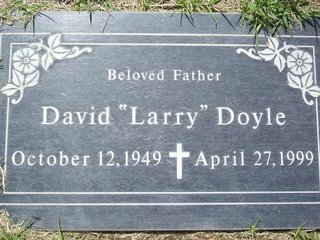 Beautifully written. Thinking about you.

Anonymous said...
This comment has been removed by a blog administrator.
11:50 PM