I've been living in this apartment for about two years now. (Out of curiosity, how many of you were with me on this blog when I moved? Oh, my loyal readers, a.k.a. my friends.) Last summer, I considered doing a big redecoration, but instead, I got a cat.


Oh, I suppose I should take a brief moment here to update you on my adorable Three-Legged Wonder. (No, that's not his actual name, but heaven forbid one of my kiddos searches for his name on the internet and finds my blog.) He went through a period of major nervousness, where he came out only for brief moments to eat, and even then he was awfully paranoid: 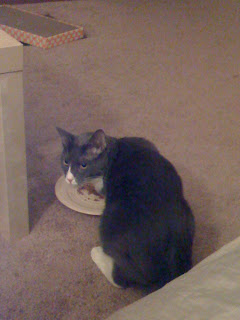 Then one day, out of the blue, he came out and lay down in the middle of the floor: 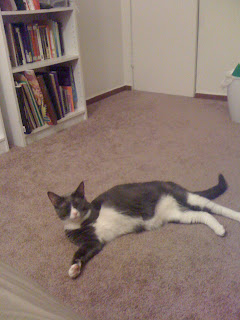 Since then, he's become a nonstop cuddle-monster, at least with me: 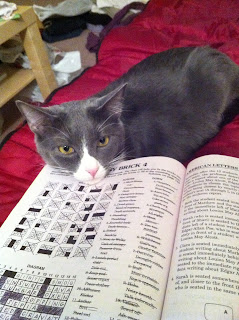 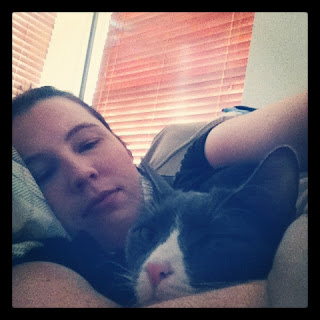 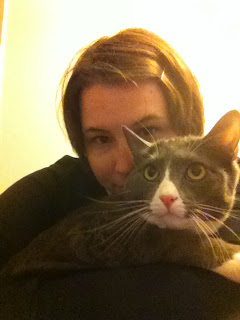 
Okay, so this summer, with my abundant free time (and no, that's not sarcasm; I literally have SO MUCH free time), I decided to finally see about doing some decorating around the apartment. This required also cleaning up around the apartment, of course, but that was a worthwhile sacrifice.


So far, my bedroom has received the lion's share of the redecorative efforts: 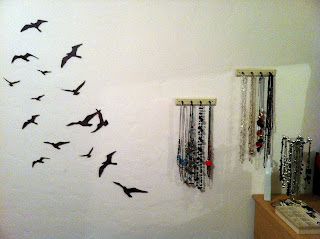 Over on the right, you'll see what I refer to as my "jewelry corner." I have a silver jewelry stand that I bought at an adorable boutique (if it were possible to be addicted to boutiques, I'd have joined a support group by now, because I love that store) and a jewelry organizer from Target, both on the dresser there. On the wall I hung some hooks, also from Target, from which I hang more necklaces. Beside them, you'll see a flock of birds, also from (you guessed it!) Target. 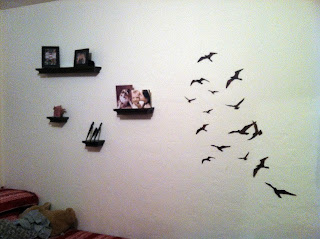 The flock of birds flows towards these shelves (from Target), on which I've placed some photos (my dad with me and my sister, my mom with me and my sister), some cards (both from J., though I chose them solely for the cute pictures that matched the color scheme), a special stuffed toy, and some Malawi souvenirs. 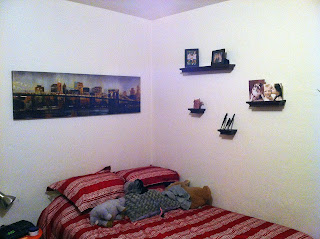 The shelves are a nice companion to this painting (from Target) above my bed. 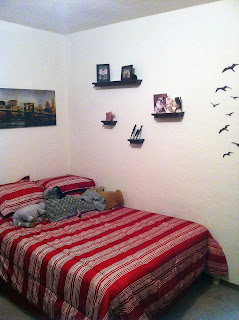 In this shot you can better see my new bedding set, which, like almost everything else, comes from Target. Also on there is my Eeyore pillow pet that I bought at Disneyland; Kitty McTripod believes I bought it as a new bed for him, as he now sleeps there pretty much every night. 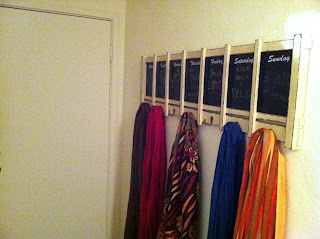 Moving away from my bedroom, this wall hanging comes from the previously-mentioned boutique. On each day of the week I've written myself a little note like "Smile!" or "Kick back and relax!" And hanging from the hooks are some of my loveliest pashminas. 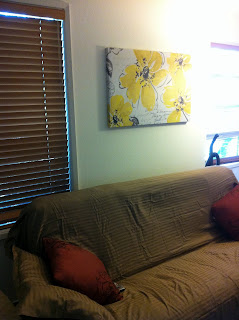 Finally, we come to the living room. The futon cover is new, though not very different from the previous one. The painting is, yet again, from Target, but sadly has no link available.

Personally, I'm thrilled with the improvements, and I look forward to considering other decorations (I still have quite a bit of wall space to cover).

What do you think?

I've been living with boxes as furniture for over a year. I should change that, and you've inspired me!

I love the flying bird decals!

1. I was reading your blog when you moved.

3. Monsieur Tricorne's expression in the puzzle picture is awesome. To me it looks like he's thinking: "Really, now, do we care where Sarah is sitting? No, no: we don't. We simply don't. Wait, is she seated behind -- no, never, mind, we don't care."

Very nice!! I was reading when you moved. And .. did I miss a post about your 3-legged cat? How did he become 3-legged?