Why I Have Been Crying All Day

Last year when I was in Africa, I got very sick. We even thought it might be malaria. We were fairly certain it wasn't, but didn't want to take any chances. I went to the hospital, and I was treated with extra-strength fever reducers and strong anti-malarial pills. Basically, I was treated for malaria. Because we couldn't know for sure if I had malaria, we treated for the worst-case scenario.

The treatment was to take three pills: one that night in the hospital, one 12 hours later, and the last 24 hours after that. If I had malaria, that (combined with the fever reducers I was given) would treat it, and I would most likely be fine. If I didn't have malaria, the treatment wouldn't harm me - it just wouldn't have any effect. Seemed like a win-win.

I took my pills at the appointed times, and within less than a week, I was back to full strength and energy again. No problems. It was, while not exactly easy, very straightforward: No malaria for Lara.

The child I showed in my last post? His name is Clement, and he died two days ago of malaria. 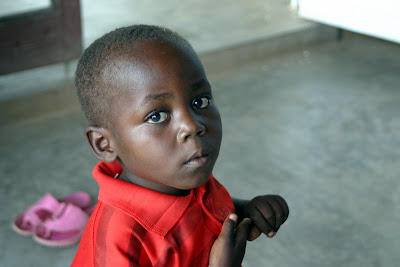 I am, to put it simply, bereft. I know that children die every day, and that in Africa especially, this is not all that uncommon. But this was my beloved little monkey, my little playmate who followed me around holding my hand or reaching up for me to hold him. He was my heart, left behind in Africa, and now my heart is lost, because he's gone. 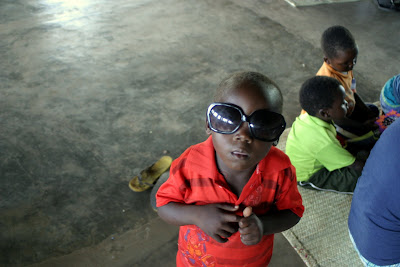 The last day we spent at the center with the kids, Clement was, by far, my hardest goodbye. I wasn't sure if he even understood what was happening - that we were leaving. I wanted him to know how badly I wanted to see him again, but I didn't want to make any promises that I might not be able to keep. Ultimately, I just held him close and snuggled into his neck, and I rocked him back and forth in my arms as we stood beside the bus that would take me away from him. I hugged him tightly, and I said, "I love you so very much." I knew he didn't understand my words, but I said them anyway, and hoped he would understand the tone of my voice, or the look in my eyes, or my smile, or my arms holding him to me. I told him every way I knew how much I loved him. But eventually I had to put him down, wave goodbye, and climb on that bus. And as it drove away, I tried to find him in the crowd to see him one last time, but I couldn't - his small frame was hidden somewhere behind the excited older kids running down the road as we drove away.

And I never saw him again. 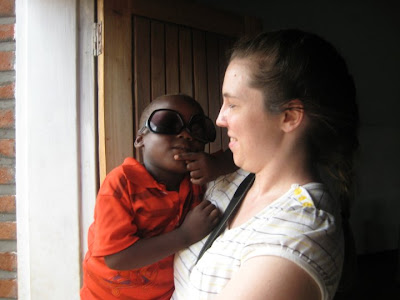 Malaria is so easy to treat, for those of us who have access to the treatment. There's no reason he had to die when there are pills to help him heal. And more than that, malaria is preventable. If Clement had a net over his bed - or, more likely, just over the area of dirt where he slept with his older siblings - the mosquitos that carry the disease likely would not have been able to infect him.

I don't often get on a soap box and call for donations, but I'm going to now. Consider donating a mosquito net for a child in Africa. Compassion International is a respected organization that runs the "Bite Back" campaign, aiming to end malaria by giving African children access to and education about mosquito nets that could save their lives. Just $10 donates an insecticide-treated mosquito net to a child in Africa. Ten dollars - that's it.

Please consider donating today. You could save someone's heart from breaking. 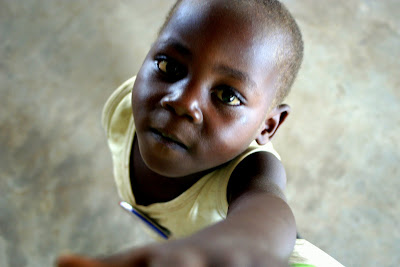 Forgive my prying, as it's kind of insensitive. But how did this happen? I mean, was he being treated for malaria before and while you were there, and it just didn't work? Or did he contract it in the few weeks since you left?

It is so easy to cure some of the things that kill children every day, yet it doesn't happen. I'm off to make my donation now, and to send some love into the Universe for your baby...

I am so sorry. I am sure he knew what that hug and snuggle meant, even if he couldn't understand the words.
My husband's aunt works for a non-profit which brings medical supplies to poverty stricken nations so I've gotten to see through her pictures and stories how dire the situation is - and how easily we can help. I'll be donating. Thank you.

I know that thousands of children every day die, but each is precious and I'm so glad he had you to love him.

FJD - Not prying, and not insensitive. He was very healthy when we were there, which is part of why this has been so devastating. He had gotten much stronger and healthier since we saw him last year, and we were so happy to see the improvement. He contracted it in the time since we left. Sadly, without treatment, malaria can kill very quickly, especially someone with a compromised immune system due to HIV, which Clement almost certainly had.

I am still, at times, speechless with the sadness. If I had been there when he'd gotten sick, I would have paid anything to get him the treatment I was able to get last year. But I wasn't there. I didn't know.

Thank you for talking about this. I had been trying to figure out where to donate my credit card refund to, which happened to be about $10. One mosquito net on its way to Africa.

Oh Lara, I'm so sorry. Of course I'll donate but remember - you gave him something no one else could, your heart. And I'm betting he knew that.

I am so, so sorry. Just because the death of a child is not uncommon doesn't make it any less tragic. Three mosquito nets are now headed out to protect other children. Thanks for providing the link.

I am so, so sorry. Just because the death of a child is not uncommon doesn't make it any less tragic. Three mosquito nets are now headed out to protect other children. Thanks for providing the link.

Oh honey, I came by to see how your trip went and I didn't expect to be in tears after a few seconds.

I'm so sorry. That's just so heartbreaking. And so sad and frustrating at the same time.

Heading over to donate. Thank you for sharing him with us.

Wow...thanks for sharing this heart-wrenching post. It's amazing how little a mosquito net costs, and how many people don't realize how much of a life saver they can be.

I came across your blog through Lisa's blog roll, and so glad I did. Keep up the good work!