Mini-Posts... Bloglets... Blog Nuggets, If You Will

I have way too many posts that I want to write, and way too little mental energy to do any of them real justice. And that lack of mental energy comes at the end of the third day in a row I've taken off of work. (By that I mean that we had Friday off, then Saturday and Sunday, and I didn't do any work on any of those three days. Tomorrow will be... tough.) So if I have this little intellectual capacity for blogging right now, it's clearly only going to get worse when I am back working again.

Thus I have decided to just write the posts as mini-posts, with as little effort as that title suggests. But this way, at least you get a taste of what all has been going on in my life and in my mind for the past... 11 DAYS?! Wow, it felt like longer than that. Still, 11 days is longer than I like going, especially when I have so much to say. So here you go, bloglets ho!

What I Learned at Panda Express

Apparently, Panda Express is THE place to be at 7:00pm on Valentine's Day / Chinese New Year. There were, no lie, more than 20 people in various stages at the line when I was there. It took me about 20 minutes to get my steamed rice, kung-pao chicken, and chicken with string beans.

Also, people fail at using common sense when forming lines. It's like they have no concept of how to organize themselves to maximize the space available so that the poor family who came in last can stand somewhere other than out the door in the cold, cold night. I kept trying to move the line to curve further in the place, so that the small children freezing in the California winter night (so, you know, about 61 degrees or so) could come inside, but everyone just ignored me and continued cutting the corners and wasting space. Damn you all and your lack of common sense!

Fiances Are Special, and So Are Ex-Fiances

I've been thinking a lot lately about my relationship with J. Most of you here know that J. is my ex-fiance, and we broke up in October of 2006. I realized recently that in about a week, we will finally hit the point where we will have been broken up for longer than we were together. Up until now, people would ask how long we were together, and I'd say, "About three and a half years." They'd ask how long ago we'd broken up, and the answer was always some smaller amount. I was surprised how many people would comment on that: "Oh, wow - you were together longer than you've been broken up. Are you over it by now?"

Most of the time, yes, I'm "over it," or as "over it" as one gets. But I still have moments of regret, and I still have moments where I wish those things that made our relationship impossible would just magically get fixed and we could be together again and back in love. However, I know that those kinds of things don't magically get fixed, and instead, we'll just be friends instead of in love.

What I've come to realize over the past few weeks, though, is that our friendship is incredibly special, exactly because we were together and aren't anymore. We have all kinds of inside jokes to make each other laugh, many based on our breakup or the problems we had in our relationship. (Hey, if you're broken up anyway, you might as well laugh about it.) We still get to dance together and laugh when things go wrong, I still trust his opinion more than most other people I know, we still find each other's conversation and company interesting and entertaining - or at least, I find his conversation and company interesting and entertaining, and if he doesn't feel the same about me, he hides it well.

I guess I've just come to a place where I can be grateful for who J. and I are to each other now, instead of lamenting what we used to be. I hope he feels the same.

Spirit Week and Why It Sucked: A Recap

So this last week was Spirit Week at Christian School, and I was SO looking forward to it. If I had my camera here with me, instead of having left it at school, here are the pictures I would have for you: 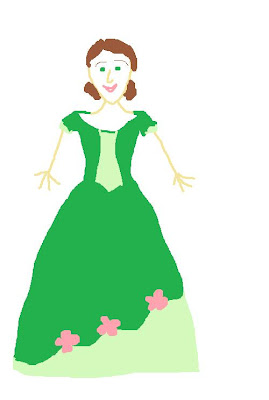 Disney Day - I was "one of the other eligible maidens at Cinderella's Ball." 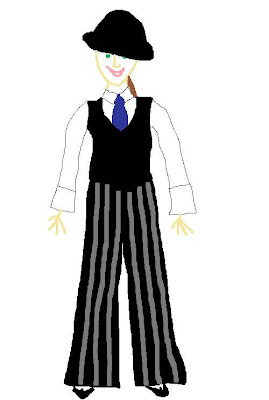 Celebrity Day - Tpiglette and I were Bonnie and Clyde, but I was too lazy to draw her, so you just get Clyde. 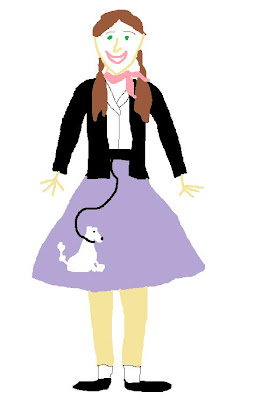 Decade Day - I supported the sophomores in 1950's garb. 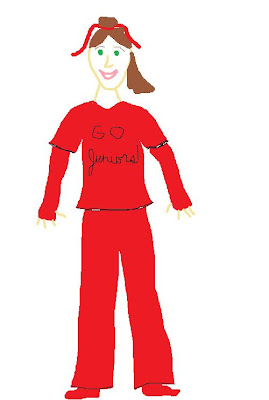 Color Day - I supported the juniors in red.
(I have to admit: I had way more fun than expected drawing those crappy pictures. Oh, and I forgot to draw arms / hands at first, and got to lazy to do more than scarecrow-stick fingers, so just work with me there.)

So yeah, dressing up = FUN!

You know what does not equal fun? Let me tell you:

1. Hundreds of students flagrantly ignoring dress code because "it's Spirit Week!"
2. Hundreds of students walking out in protest because they didn't win first place flat out - they tied.
3. Boys from two rival classes getting in a fist-fight on the lawn because two of them decided to deface the other class's poster.
4. One girl getting boo'd when she walked into her class because she was a senior and the rest of the kids were juniors.
5. The administration deciding to arbitrarily shorten the last class of the day by ten minutes to extend the post-very-tense-rally lunch period.
6. All the horrible angry messages I saw all over Facebook complaining that Spirit Week was rigged, the judges were biased, other classes cheated, etc.

I am probably 78% hoping the just cancel it next year altogether.

I've come to realize that different people have different issues that recur through their lives. I have friends who, for example, always struggle with finances - student loans, credit card debt, an inability to spend within their means, etc. I am incredibly blessed that this has never been a problem for me; while I'm certainly not rich, I've never wanted for anything I've needed, and I've never actually been in debt. I don't take this for granted in the least, because I know that while yes, I am relatively responsible with my spending, I've also been very lucky with the ways things have played out for me in my life.

Weight problems are the same way, too. I know many people who struggle with their weight through their life. Weighing too much, then weighing too little, eating unhealthy and never exercising, then exercising compulsively - they just can't get a handle on it. And all throughout, the horrible self-esteem that goes with it. It's hard to go out to eat with friends, to make sure you can find things on the menu that go with whatever the current fad diet is, etc. I'm glad that, despite generic girl insecurity, I've never had huge weight issues.

Why bring this up? Bette Jo commented on the last post and asked if I've been dieting, noting that I look like I've lost weight. No, I haven't been dieting, and I haven't really lost much weight - maybe a few pounds, but certainly nothing unhealthy. Last year - my first year teaching at Christian School - was the worst year of my life for "weight problems." When I got the job there, I weighed about 150 pounds. By the beginning of July last summer, I was up to 170. As far as I was concerned, that was unacceptable, mostly because it seemed so unhealthy, and I hated having to buy new pants because I couldn't fit in my old ones. (I love buying new pants, but not for that reason.)

Look at this picture from the end of last year, then look at this picture from more recently (you can see it mostly in the arms and the face). I'm now down to about 158, which I find much more reasonable. Still, though, what I think about more is how lucky I am not to worry much about my weight. It takes a lot for me to really pack on weight, and for the most part my basic metabolism keeps me steady. I'm trying not to take that for granted either, though, because I know a) it'll get harder to maintain my weight once I hit 30 and my metabolism goes down the tubes, and b) someday I'm hoping to have a baby, and that'll change EVERYTHING (or so Johnson and Johnson's assures me).

Don't get me wrong, though - I have plenty of my own problems that recur through my life - depression, cutting, shoe-shopping addiction... I'm just acknowledging that there are some issues I'm very lucky not to deal with. (Do I sound like a bitch? I don't mean to. I meant this as a "counting my blessings" kind of thing, not a "haha - I laugh at your problems" kind of thing.)

... This isn't actually a post. I just thought that title was funny.

Now choose one of the blog nuggets and comment - or if you're particularly brave, comment on all four. GO!

Labels: Dating, Mix It Up, Work

2. I agree. Former SOs can be really good friends if the breakup is handled with some grace.

3. Your drawings are really good and also hilarious. I hope you post the actual photographs, as it would be fun to compare the corresponding images.

What's up with the Spirit Week negativity at your school? Esp. a religiously affiliated school? I mean, what would Jesus do during SW? I don't remember anything like that at good ol' MHS.

4. (You sounded perfectly innocent in that explanation.)

And WORD re: Spirit Week.

[To fjd who commented before me: *Seriously* - and as staff members, we totally agree. To be fair, nothing like this has ever happened before (of which I'm aware, anyway, and certainly not in the 4 years I've been at this school).]

Your drawings are better than mine would have been!

We don't do a 'spirit week' at CHS; too many of the kids wouldn't be able to pull that off in any way even remotely resembling appropriately. Sigh.

The drawings? Love them. The Spirit Week dram? Hate it.

I hadn't noticed the "weight" until you pointed it out.

... just so we're clear - I asked if you had been dieting because you looked slimmer to me - but you didn't need to lose anything!

that is great that you guys can still be friends. Tough to do and yet when it can be done, it seems clearly, very rewarding.

Isn't it amazing what guys fight over? defacing a poster? puhlease