Go Ahead, Make My Day

Hang on, before we do anything else, I need to admit something shameful. Just now, as I was going through the photos of my work clothes from this week, I realized that on Tuesday and Friday - of the SAME WEEK - I wore uncomfortably similar outfits:

What the heck was I thinking? What is wrong with me? I can feel my reputation as School Fashionista slipping through my fingers.

Of course, the real question is whether anyone else noticed...

Outfits for the rest of the week: 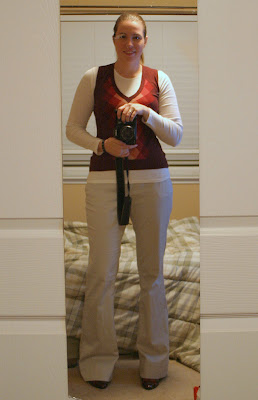 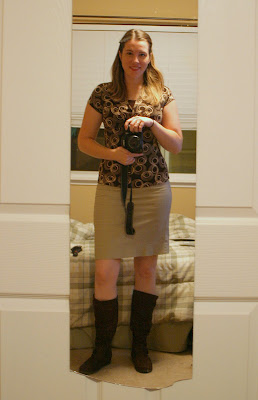 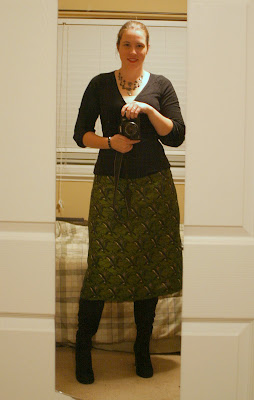 (That skirt was made in Malawi - hooray!)

Have you seen It Made My Day, a new site from the same folks who run I Can Has Cheezburger and FAIL Blog? Basically, it's a collection of short anecdotes people send in, each one followed by "IMMD" ("it made my day"). Yes, I know, I already sort of copped out on a blog post by ripping off 1000 Awesome Things, but in spite of that, I am going to do it again. So here are a few things that recently made my day:

We had a car wash yesterday after school to help buy school supplies for kids in Malawi. We charged "donations," meaning however much the people wanted to pay. One student - a student - gave $40. IMMD.

I wore my hair in pigtails down to the farmer's market this morning. There was a little girl wearing pigtails too. I smiled at her. She giggled and smiled back. IMMD.

My mom is coming to town next weekend, and I asked if she could come watch my classes on Friday. The administration said she could. IMMD.

(Last one, this requires some background info. This year at school, I have really become more vocal about our trash problem. Our kids just leave garbage all over the school campus, and it bothers me to much that I've started trying to raise more awareness of it. A lot of our students are genuinely good kids, and I think for many of them, they don't help fix the problem because they literally just don't pay enough attention to notice. So I took some pictures: 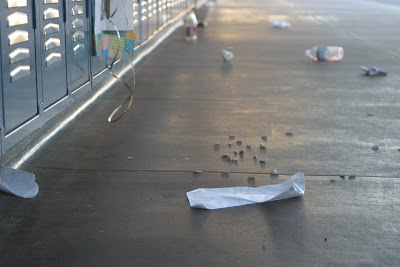 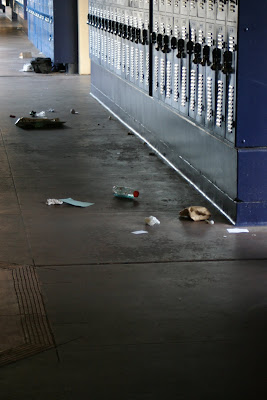 So this has been a big issue for me lately. Then...)

I was leaving school yesterday afternoon and saw a group of kids I didn't know eating snacks at a table. I said, "You're going to clean up all that trash when you're done, right? So that the table doesn't look like the rest of this disgusting stuff?" (I pointed at the trash all over the ground.) "Yeah, we will," they said. I added, "You know, if you feel like it, when you throw your stuff away, maybe you could pick up a couple other pieces of trash and throw them away too. You don't have to, but it might be nice." "Okay," they said. I wished them a good weekend and walked out to my car. When I drove past them on my way out of the parking lot, they were racing each other to see who could pick up and throw away the most trash. IMMD.

What (or who) has made your day lately?

Awesome. That was a totally-teachery thing to say/do. You've definitely "made it".

Thanks for getting awesomesauce all over my computer. Now I have to scrub the whole thing down. Great.

you are awesome and you always look adorable

Last week on the bus to work I happened to be sitting next to a guy I had met briefly through a friend. As we chatted he heard that K was out of town so I was basically just hanging out alone at home all week. That afternoon I had an email from him inviting me to hang out with him, his wife, and another couple that evening. They hadn't even been planning to get together, he just got the idea when talking with me on the bus and made it happen. IMMD!