The other day, I was joking around with folks from my dance troupe during a break at rehearsal. We were talking about aerials and how - for some reason - my partners seem to have a habit of colliding with my boobs. One particular flip lands in such a way that, for a while, their noses were pretty consistently landing squarely in my cleavage (often with a great deal of force, which can make for some really ugly bruises). And after one such experience, I joked that I was going to make my aerial partners t-shirts that say, "Boobs in face: That's how I roll." That has since become an ongoing joke, and during aerials practice at this most recent rehearsal, Tali said, "Yeah, K. and I are going to get little shirts for your babies to wear!" (Because, well, when they're babies, that probably is how they'll roll.) 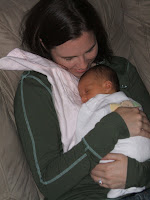 The very next day, I was talking to a young child. She asked me, "What's your mommy's name?" I told her. "What's your daddy's name?" I told her again. "Where is he?" was her next question. "He'd dead," I told her. (She is old enough to understand the concept, but young enough to where I wasn't going to use euphemisms for the idea, like, "He's in a better place," or, "He's left this life," or anything like that. Simple and straightforward, much like her questions.) She asked if I could bring him to see her sometime, and I said, "Well, no, because when someone dies they don't come back. When people die, they're gone forever." She looked at me with a direct expression and shook her head. "No," she said. "Not gone."

I don't think she meant it to be as profound a statement as it came out, but her answer shook me deeply. It was one of those moments where I had to wonder if children don't understand the world and its mysteries much better than I do. Even though I'm older and more experienced, I wanted to grab hold of her simple statement and hang on for dear life. If she believes so strongly, maybe it could be true - maybe he's not gone.

We all have moments where our faith feels weak - our faith in the good of humanity, our faith in God, our faith in ourselves and our dreams. And in those moments, we reach out, grasping at the air, hoping to find something to believe in. But really, all we need to do is look to those around us, and find someone who can have enough faith for two. When I doubt, I have friends who will keep believing until I can recover myself and be strong again; I would do the same for them any day of the week.

Who has believed for you? How have others kept your faith alive when you couldn't do it alone?

I'm taking a day off of Google-age this week because I'm feeling a little too contemplative for the light-hearted humor. However, this is a good time to poll you guys about the Sunday Google-age as a feature:

1. Do you like Sunday Google-age in general, or do you find it boring?
2. Are Google-age posts too long, too short, or a good length?
3. Should Google-age continue to be a weekly feature, become a less frequent feature, or disappear altogether?

Anything else you guys have to add would also be helpful. I'm just trying to figure out what you all think of the Google-age.

One last thing: Thanks to everyone who submitted questions for me. There is some deep stuff in there, for sure. I'll be answering those in the coming week (and probably into next week also). If you didn't submit a question, but would like to, I am definitely still open to more, so click here.
Posted by Lara at 2:32 PM

Glad to have my [often lame] jokes help :) I think moms are often the best keepers of faith for people - I know mine is a huge one for me. Even though you know it's their job to believe you can achieve everything you want in life, the strength of that belief can still be extremely powerful.

What a gift she gave you in that little, straightforward statement. And your children, how lovely they shall be, seeing how loved they already are.

Dude, did you go to Mass today (or last night) or is it just lucky that you hit on the faith thing today, because the lectionary was about faith. I guess I notice the connection because I'm still pondering. It was good here in Tennessee, and I needed to hear about doubting and faith and all that.

I like the google-age! length/frequency as is, or as works for you.

I was lying in bed afraid that I might end up with something like schizophrenia or dementia, because I was hearing voices in my mind. (Chronic encephalitis apparently part of chronic fatigue syndrome... that might make more sense when I blog about it someday.) Anyway, when I got up your blog post had arrived in my inbox. It was just what I needed and made me cry. I actually feel better now.

I think you articulated what I couldn't quite in my earlier comment about praying together, about looking around and finding someone who has enough faith for two. I've been wondering how a person can find faith if they don't have it. In the picture at the bottom of this post, it appears to me through your eyes that you can see God, so even if I can't quite see Him, if you can then I know that He is there.

I also think that children sometimes see things better than adults can. As we grow up, we're taught otherwise.

Anyways, thank you for helping me walk for a while. :)

Oh yes! That is the best thing about my two best friends - they see me as I don't even see myself. They do carry my dreams for me...

I loved this post! It made me somewhat tearful even. You'll understand!

Google-age should remain unchanged, unless you're bored with it. It cracks me up all the time!

wow..how profound!Friends have been my strength at times but my little girls speak words that are so simple and keep me believing when I am too tired to believe. I believe, help me with my unbelief.

I totally believe that children grasp the world far better than most adults. And I often wish that I could hang on to the wonder and simplicity of childhood for the rest of MY life. And I agree with that little girl, your dad isn't gone. He lives on--in you, in your family, in the stories you tell and the memories you share-- forever.

I think that t-shirt idea is hilarious. I like the Google-age... it's funny.
Also, I tagged you if you want to do it.

Google-age is wonderful, whether you do it every week or not. It's always a laugh - and - you get such GOOD searches!