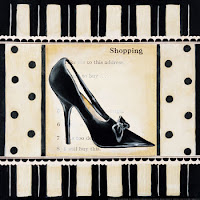 I like to shop. A lot. I don't think this is a big secret to most of you, especially since anyone who's ever visited here even briefly has probably noticed my shoe obsession.

I am not a person who experiences buyer's remorse. This isn't to say that there haven't been items purchased that have turned out to be less than anticipated, because there definitely have been. Dresses that didn't fit as well as I first thought, shoes that weren't as comfortable, purses that weren't as functional - I've been through all of it. It's just that these are the kinds of things I just shrug off. I think, "Oh well, I'll just buy something else instead," and I give the offending item to charity. It doesn't bother me.

I also don't experience what I think of as "non-buyer's remorse." I know it's hard for you all to imagine, but I do sometimes exercise restraint and leave things in the store. There are times when I can be honest and say, "I don't really need another pair of shoes, and I won't really wear those often enough to justify buying them." And I leave them in the store. Over the next day or two, I might think of them once or twice, but pretty quickly they're forgotten. I didn't need them, I didn't buy them, and I don't think of them after that.

Well, I had my first experience of non-buyer's remorse. Remember way back in January, when I went shopping with Reda? I found the most adorable pair of Keds, with llamas on them, but the store didn't have them in my size. "Fine," I thought, "I don't really need shoes with llamas on them anyway." And then?

I thought about them for ten months straight.

From January to October, I wished I had those damned llama shoes, because llamas? On shoes? How cute is that? It's so adorably random! They haunted me, those shoes. For Ten. Straight. Months.

Eventually, I realized that the peace of mind alone was worth the price of the shoes, because I wanted to just stop obsessing over the fact that I didn't own them. So I went to the Keds website to finally order my llama shoes, and...

THEY WERE NO LONGER IN STOCK!

Yes, that's right, they were gone. I could look ahead and see years of regretting the loss of the wonderful llama shoes. On my deathbed I would acknowledge that my one wish was that I would have bought the llama shoes when I had the chance, and my children and grandchildren and great-grandchildren would all look around and say, "Llama shoes? What is she talking about?" And I would die quietly, while my last whispered "Llamas..." echoed on the air, like my personal version of "Rosebud..."

But then a friend pointed out there there were myriad other online shoe store options that probably carried the llama shoes, and within minutes, I found them in my size and began to breathe again. And now? 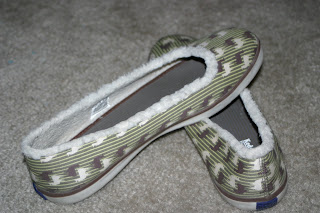 That's right, folks. I am the prouder owner (and wearer!) of llama shoes. And let me say that they are everything I had hoped for and more. They are comfortable and cute - the best combination you can hope for from shoes.

So, are you a "buyer's remorse" sort of person? Have you ever experienced "non-buyer's remorse"? Or am I the only crazy one around here?
Posted by Lara at 4:47 PM

That is so awesome that you got those shoes! It's great that you have a friend that can help you out with that stuff. Can I hang out with your friends? I need new socks. And your friends sound like they're super cool.

oh yes yes yes, I know exactly what you are talking about - how many times has that happened to me? There was this hat (I loooove hats) at the "one of a kind" show - great craft show they have up her for artisans twice a year - and I didn't buy it. I took a card but the artist wasn't making them anymore.

I'm so happy to know that you found the shoes - congrats (you've given me hope).

kaiser - my friends aren't as great as i make them seem. i'm just a really good writer. ;)

motherbumper - it is impossible to take shopping too seriously. shopping is serious business.

In the last couple of years especially, I have really developed a taste for fashion and style, but I loathe shopping. Florescent light gives me a serious headache, and fighting crowds and finding out that things I thought I liked don't like me, or are sold out... oi. But that pesky interest remains. So have this balance of searching as quickly as possible, and ending up with something I regret - shoes that aren't as comfortable as I imagined in the store, shirts that I got because they were a good deal - but that I don't end up wearing. But there are those shining things you wish you'd gotten two of. Those wonderful moments.

Watch out for the internet shopping - it's the easiest way to end up with something that would be great if it actually fit you like it looked it would in two dimensions. [Said the girl with two coats somewhere between ebay and her doorstep]

I am so pleased you got the shoes! This was a great post... really fun.

Oh yes, I get buyer's and non-buyer's remorse all the time. Ebay is the worst for buyer's remorse... funny how many things you imagine will be perfect by just don't fit.

I had a very bad case of non-buyers remorse when I was visiting a dear great aunt in Manatoba last January. Every day leading up to the trip, she called and asked if I'd bought a nose scarf yet. And I'd say, no, not yet Great Auntie Francine, but I will, don't worry. But guess what? I forgot to buy one! And my nose was really, really cold the moment I scampered off the bus at my dear Great Auntie Francine's home. So she gave me one of her old orange and avocado green nose scarfs she had knit sometime in the '70's, and I had to wear it or have my nose fall off from the cold. Alas, that's the one I'm wearing in all the family pictures from that year. Sigh. If only I had bought the one I saw in the Payless NoseScarfSource window with cool llama patterns on it before going on the trip.

If I want something, I buy it. I'm a self proclaimed shopping addict. I'm pretty sure my wallet hates me.

"There are times when I can be honest and say, "I don't really need another pair of shoes, and I won't really wear those often enough to justify buying them." And I leave them in the store."

brian - are you doubting my word? i assure you i'm quite trustworthy... ;)

You don't know me but I stumbled across your post in search of the very same pair of shoes, and found it funny because I posted a nearly identical blog almost a year and a half ago. Just goes to show, you did the right thing, but those damn shoes are still haunting me! I just love llamas!