Reunions Rock, and So Do I

Saturday afternoon, I had the opportunity to get together with Lilit from Lilit in Stereo for lunch and an afternoon chat. I've admired Lilit's writing for years, and I feel like as two young women finding our ways in the world, we "get" each other in a very special way. And all of that on its own would have had me excited to meet her in person when she was here for a visit. But with Lilit, it's more than that.

See, a long time ago, Lilit and I were best friends. Of course, her name wasn't Lilit, and mine wasn't Lara, but we were there, running the playground of elementary school hand in hand. Lilit moved to the other side of the country when she was 11, and we lost touch for many years. After finding each other in the blogosphere, I was thrilled at the opportunity to have a reunion with my old friend.

I picked her up and as soon as she opened the door, she greeted me with a huge hug. We went to lunch, had a great conversation, and headed back to my apartment. She got to meet the kitties, and then we had a slumber-party-style hang-out session, including a trip down memory lane courtesy of a home movie I managed to find...

Yes, that's right, I totally blindsided poor Lilit with video footage of my 10th birthday party. In the course of watching this tape, we:
As Lilit said later, "At some point it felt like I just popped over for the afternoon. It no longer felt like an event."

Just as it should be, for friends like us. 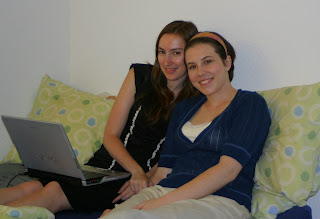 Okay, well, I think pretty much all the bloggers I read rock, but here are the five I'll name for now:

Aly at Alyndabear - Oh, how I adore my Aly. She was my first Australian love, long before Aussie Boy entered my life, and she called me "chook," which was just so darn cute. I don't care what anyone says: She doesn't use too many exclamation points, and she's completely age-appropriate.

Angela at On Second Thought - Angela is totally what I picture as the epitome of a Rockin' Girl, and since she happens to be a blogger, she fits this pretty much perfectly. She's a designer and she's going to live in a loft in a big city - a suburban girl like myself just can't fathom the coolness.

Ali at Cheaper Than Therapy - Talk about one hot mama! Ali rocks so much that I actually sent her a snarky complaint a couple weeks ago about not being on her blogroll. Really, I was just desperate for some lovin' from such a cool chick.

And, last but not least,

LaLa at Julaberry - Spanky and New! - My second Australian love, since I found her through Aly. Damn but I would love to go out partying with this girl some time, just because she seems like she rocks that much. If only we weren't so many miles apart. 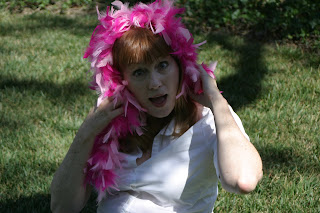 Rockin' chicks, my mom is in awe of how much you rock.
If you aren't on this list, trust me, you still rock! In fact, you rock THIS much: 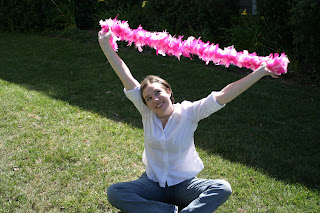 Ohhh.. bloggy meetups, so much fun! You guys look very comfy and happy, am so jealous. :)

You are definitely a 'rockin chook, Lara. *puts on cool sunglasses*

LaLa is indeed awesome, and a fabulous singer too. (Trust me, I know.)

That was the rockingest, coolest, most awesome blog ever!~!~ Glad you two got to spend time together!! How cool!!

ooooh. I am jelus too!

But then, I get to hang out with Aly so we are probably even! She lies, BTW, I am a terrible singer, but it helps to DROWN OUT MY VOICE WITH THE VOLUME.

And thank you, I feel all girlie and honoured! Only bummer is, now I can't nominate you and Aly for the Rocking Girl Blogger award... poo.

My evil plan is that you shalt wed Aussie Boy and then move here and then Aly and I can drink all the free booze at your wedding.

ohmigosh! i totally missed this!!!! thanks@

aly - i wish you, lala, and i could have a bloggy meetup too! glad we're both on the "cool sunglasses" bandwagon together. :)

lala - jelus, are you? awesome. also, why do i have to be the one to move? why can't you move here?

I have a similar reunion coming up in two weeks - my best friend from seventh grade. I'm a bit nervous for some reason. I hope it goes as well!

nutmeg - is she a blogger also, or is this a non-blog-related reunion? either way, i'm sure it'll be great and you'll have a wonderful time. just don't overdose on the nostalgia! ;)

Dude, not our fault. That old man was so asking for it. He was probably hard just listening to us, and probably he doesn't get hard very often anymore.

jitta - i don't know if i should be totally grossed out by that thought, or proud of myself for having done something nice for someone. :-P