Moments in the Workplace

[First, a note: Thanks to all the visitors who came by from Cape Buffalo's site! I hope you decide to stick around for a while! I had a great time doing the Blog Exchange, and I'm already looking forward to next month. If you haven't done so already, go check out my poem and leave some comment lovin' - I really enjoyed writing it, and was happy with the outcome. :) ]

A Moment of Truth
What They Think We Do at Work: 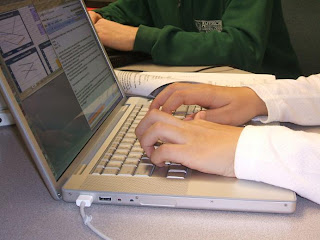 What We Actually Do at Work: 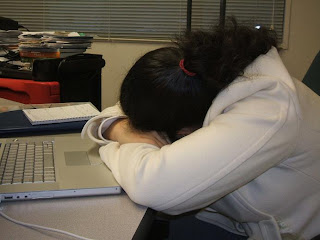 We still manage a fair amount of productivity, though. Really! We do! I promise!

One Moment in Time (Travels)

The other day, my students and I were talking about having friends and family all over the world, and how helpful the internet is in making that possible. But still, it is, at times, a bit strange, talking to people so far away.

I told them about a conversation I was having with Aly one Friday night, wherein I asked her about her plans for the weekend. “She seemed a bit stymied at first,” I told my kids, “but then I realized why. Where she lives, the weekend was already half over. Every time I talk to her, I always forget that where she lives, it’s already tomorrow.”

AB exclaimed loudly, “She lives in the future!?”

I sighed. And couldn't think of a single thing to say.

AB's Moment in the Sun

We decided to start class today with some jokes, just to give the kids a brain break and have some fun. We asked if anyone had any jokes to share - so long as they were appropriate. Knock-knock jokes were popular, as were jokes relying on puns ("Olive!"). All in all, we were having a good time.

Then AB raised his hand (yes, the same one as in the above story) and said he had a joke. "Is it appropriate?" my CT asked. He assured us it was, and came up to the front of the class.

"Okay," he starts. "So this woman walks into a ladies pleasure store-"

I don't think jokes will be making regular appearances in our lesson plans.

So that's what my job is like. How about yours?

Hee. I feel like I should be typing this with my brain or something, whilst eating all fat free junk food because isn't that what's going to happen in the future? ;)

I still haven't caught you yet, and I've been home for over a week. SLACK. If I can't spy you on AIM, I say we email. Okay?

My gosh! I hope you took AB aside later and asked him to tell you the rest of that joke!

Sweet.
I work at a Chamber of Commerce. We get everything from:
What time does the Adirondack Park open? (It's 6 million acres of forests and mountains...it never closes)
To:
"I am looking for a woman I went to school with in Greenwich. Can you help me find her? Her name is Caroline."
"Sure, what's her last name?"
"I'm not sure."

If you ever get the whole joke maybe you can share it with me, that way I can say:
"No dice on Caroline, but did ya hear the one about the lady who walked into the pleasure shop?"

From the U.S. West Coast (where you and I both live), Australia is in the future--so your student was right, despite your feelings of frustration (he said, with a chortle).

Sounds like a regular day at work for me! Yesterday 2 of my kids wanted to engage me in doscourse about the movie Slapshot and I said "you KNOW why we can't have this discussion, don't you"...

aly - yeah, future girl. get with the futuristic lifestyle already! and we finally caught each other on AIM - YAY! :)

california teacher guy - sadly, no. we never found out the ending. between you and me, i'm not sure there actually even was one.

and you have a good point - australia IS in the future... sort of.

amanda - hahahahaha... it would certainly be a new way to respond to such a stupid request. you could also just start giving out information. "caroline? oh, you mean with the blonde hair and the green eyes? and she always wore that pink cardigan with the thing on the shoulder and the other thing on the cuffs? that caroline?"

cape buffalo - yeah, all kinds of distracting and inappropriate-for-the-classroom conversations. every. single. day.