*I hope God doesn't mind my borrowing His phrasing for a blog post about my car.

Ginger - my car - and I have been together for a lot of years now. We first became a couple in June of 2001, which seems much longer ago than a mere eight years. She was a cute young thing, a silver Plymouth Neon, brand new, less than 10 miles on her when the keys were in my hand. A frisky go-getter, we had a good time together in those first few weeks, jetting around from place to place.

After only six weeks, I failed Ginger completely. Due to my terrible driving Flustered by an unexpected construction detour in the middle of nowhere (and a totally unfamiliar middle-of-nowhere at that), I lost control of the vehicle, spun out, slammed into an embankment, and almost flipped over.

Ginger looked okay, but she had severe internal injuries: The undercarriage had essentially crumpled and twisted in on itself, and she was declared TOA - totaled on arrival. I was despondent and furious with myself for letting her down.

She was young, however, and healed quickly with the help of skilled mechanics. Soon enough, we were out and about again, quite an exciting pair. On tour with my a cappella group, Ginger was renamed the Evilmobile, which had much more to do with the passengers (and driver) inside than with her. Some idiot in Vegas gave us a little crash running through a light without looking, but Ginger mostly healed from that too, though she would forever make a slight popping noise when the passenger door was opened. Small children - my charges as a nanny - would make their marks through the years all over the backseat - with chocolate milk, with strawberry jam, and, on one particularly memorable occasion, with ballpoint pen. 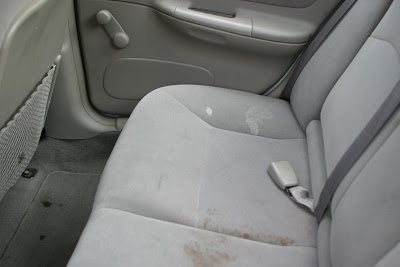 Ginger has also housed a variety of reptiles and amphibians in her lifetime. Most notoriously, Ginger was the final home of our dear departed Iggy, and he died cradled lovingly in her arms cupholder. Ramon enjoyed his shady spot for many years, only recently departing for a brief vacation in Tahiti my purse. Melvin, of course, met a gruesome end, displayed for all on the dashboard as a warning of Ramon's latent maniacal tendencies. And we do not mention Jimmy the Squid, a golden-yellow lizard who made a home underneath the driver's seat for a few years; his mysterious disappearance may have had mafia ties - we cannot say for certain.

Yes, Ginger and I have had a wonderful run. But recently, in the last year or so, I have felt us drifting apart. Oh sure, there had been earlier signs - the sunroof coming off its track, the driver's side window motor dying, the brakes making that infuriatingly annoying screeching that the mechanics assured me was not actually indicative of a safety issue. But those were easy enough to fix (though not always cheap), and fairly spaced out in terms of time.

More recently, however, it's been one thing after another:
- The water seal has failed in numerous places, so when it rains, water drips in.
- The rubber seal around the driver's side window got sucked down into the car door and doesn't seal anything anymore. This causes a loud rubbing sound anytime that window goes down or up.
- The steering wheel started leaking sticky black gunk. (That's why that blue paper is wrapped around the steering wheel in the picture above.)
- The volume knob on the stereo stopped functioning correctly.
- The electrical system started failing MID-DRIVING because of a bad battery connection.
- And when that one was fixed, the engine refused to turn off even when the keys were taken completely out of the car.

Yeah, keeping Ginger was becoming expensive, and I was beginning to hear the siren song of a new love: 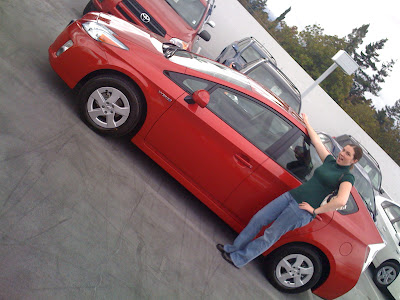 I have no idea why this picture had to be taken at this angle... 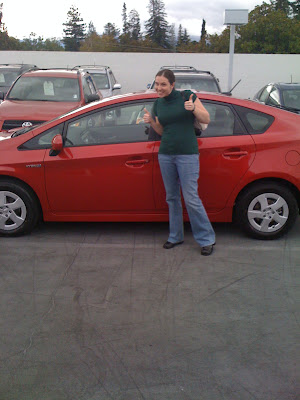 Sorry for the poor quality - all photos taken with my iPhone. 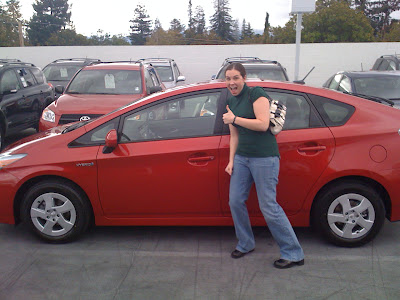 But she needs a name! And that's where you come in. What should her name be? If I choose the name you submit, you win an awesome prize: the honor of having named my car. So help me out, O creative readers!

I have a Prius, too. They are terrific. Perfect accessory for the iphone.

My first thought was something like Roxanne or Lucille for the red references, but she is so sleek and new that maybe she needs something more cutting edge? Phoenix?

Ok, totally going to shotgun this one:

Sweet car! How about Lola. She looks a little like a showgirl.

That car makes you look hot. And I'm thinking Pepper, just to stick with the spicy theme. Or Natalie.

Car-lotta
Electric Boogaloo (may be a bit long)
Lulu

Not Ginger! Nooooo! I loved that car! So many good memories of that poor baby!

And of course, how can I not vote for Natalie?

What about Georgette? It's a takeoff on George Jetson. And feminized because, well, your gorgeous new car MUST be a girl to be so pretty.

I have no cute name ideas, but I wanted to say wooooo! Prius! So spiffy!

Love the car - and how you personalize your vehicles!

Whatever you choose to call her, may you long driver her in only happiness and health.

I'm voting for Penny the Prius.

Going with the theme of feminine names related to food I suggest Cherry. :)

I also like all the food names, especially "Paprika," but only if you roll the 'r' excessively when you say it.

Otherwise, if you haven't already picked a name, I submit "Primadonna." Your car is gorgeous, she can sing (with you inside), and she knows she's better than all the other wannabes on the road.