Some stories (and pics) from the recent Disney trip:

There's a ride at California Adventure called "Soarin' Over California" that emulates gliding over various landmark places in the state. You sit in a long row of seats that then rises into the air, and your feet dangle as you watch the large screen, so you can almost feel like you really are soaring. Just so you all know, if you ever go on this ride with a group of teenagers, it is too much to hope that none of them will do something stupid, like toss off his flip-flops while you're soaring over the Pacific Ocean. 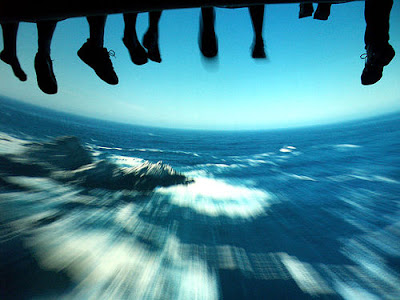 If he does do this, they don't, in fact, land in the Pacific Ocean. They land in a fenced off area below the ride and a disgruntled employee is forced to go retrieve them. Just so you know.

While waiting for Fantasmic to start, a group of us - both students and teachers - played the classic game of "Telephone." For those unfamiliar (ARE there people unfamiliar with this game?), one person starts a sentence by whispering it to the person beside him/her. That person whispers to the next, and so on and so forth until the last person hears the sentence and says it aloud - it's funny, of course, because the final sentence is almost never anything even remotely close to the original sentence, and it usually also makes no sense. Some memorable ones from that night include, "I want to be one of the furry girls who loved calamari," and "Life's just a bowl of pickles - don't make it ridiculous, life's too meticulous."

(Oh, and after all the waiting and playing "Telephone," we didn't even get to see Fantasmic. Did you know that they call the show off when the wind is too high? I didn't either.) 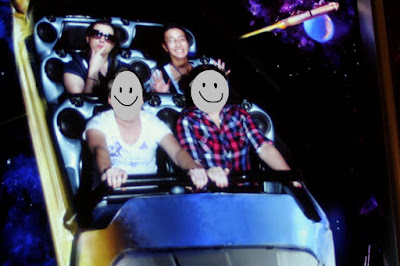 A group of four students and three teachers (myself included) went to lunch together Saturday afternoon. During the course of conversation, first impressions came up, and I asked one student what she had thought of me. She replied that she didn't really have a first impression of me because when she met me, I was just her teacher, and as such, was placed in the "teacher" section of her brain and not really further examined. (It's amusing because she's actually one of the students who best understands the "teachers are people too" concept because her mom is a teacher. But apparently when she's first meeting her teachers she just accepts them as teachers and ignores their deeper personalities.) I found that interesting, so later, while with another group of students, I asked one if she remembered having first impressions of me. She responded:

"Well, I'd already heard so much about you before I met you that it was hard to have a real first impression."

Pausing, I considered the oddness of this statement. After all, I was a new teacher this year - how could she have heard about me even before the first day of school? When I asked, she answered that there are "spies in the teacher's lounge," and they must be the ones who told her about me. When asked what she'd heard about me, she said:

"I heard you were very competent - that you definitely knew what you were talking about. And that you were amusing. And very intimidating. It was all true, by the way."

One of the most awesome parts of the weekend was Saturday night, when we went swing dancing at the Carnation Plaza Gardens. I remember when I was in high school that there used to be swing dancing every Saturday at Disneyland, but I didn't realize there still was. When we saw the sign for big band swing music and dancing, I knew we would have to at least stop by that night. So Tpiglette and I, with a few of our students, went that night to dance a bit. 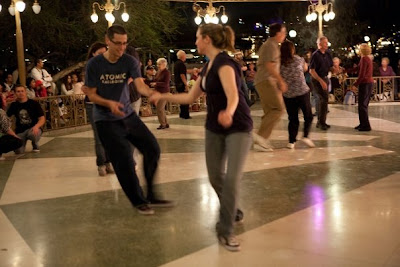 I felt very out of practice, but I was in a brave mood and eager to dance, so I actually stepped out and asked a few guys to dance. After dancing a couple times, there were some guys who even asked me to dance, which I take as a compliment, because I think it means they saw me dance and decided I was good enough to invite back out on the dance floor. 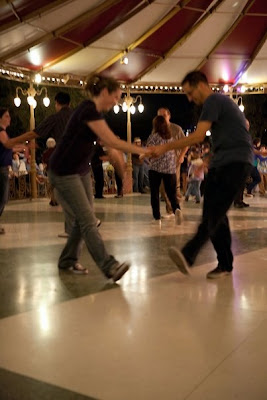 But the best part was how much my students loved it. The one boy who was present even said it was the greatest endorsement he could imagine for my ballroom dance class. As I came off the floor, he pointed back and asked me, "Are you going to teach THAT in your class?" I said that while it might not be that advanced, that was the style. And he responded, "I definitely want to do that." I was so glad to share something I love and have them there to see it. 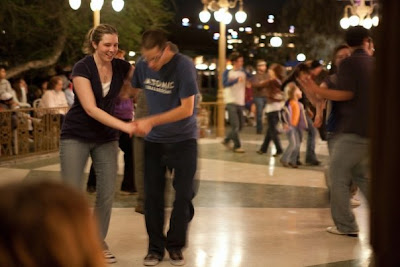 Finally, some work wardrobe pictures, because I know you all practically LIVE for them: 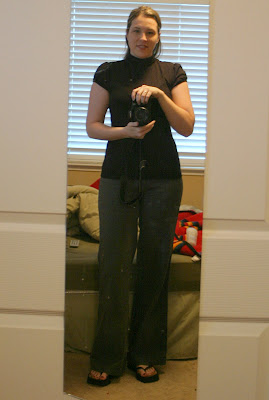 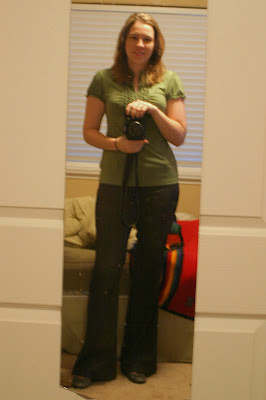 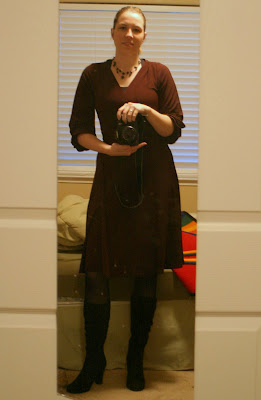 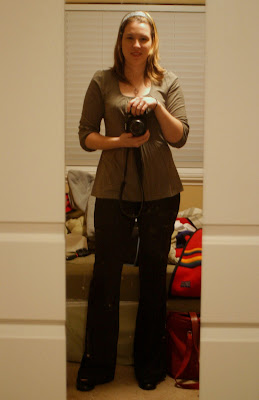 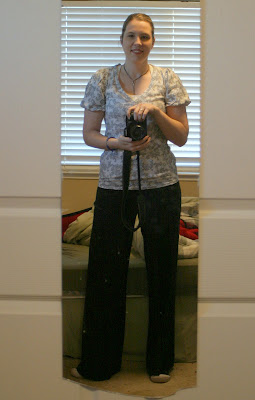 Intimidating? I wouldn't have thought so, but what do I know! Looks like you had lots of fun and you even got to dance. Too fun!

In my corner of the world, Telephone is called Chinese Whispers!

Those movie-motion rides often make me nauseated, which is funny because motion-in-the-real-world rides don't.

mrs. chili - my father was the same way. he could never do the video screen rides, and he also couldn't do anything that went in a circle. up and down roller coasters with terrifying freefalls? no problem. a carousel? upchuck city.

Girl, do you have any idea how stunning you are? Sometimes I think it's so hard for us to see ourselves as we really are. I hope you get a glimpse every now and then through OUR eyes :)

TSM Oregon - thank you so much! i've gained weight lately and it bugs me (though it has yet to bug me enough to make me get up and do something about it), so that was a well-timed compliment. :)

Intimidating? I suppose your reputation preceded you. Now I'm curious. The next time we meet for coffee, please, please do something to intimidate me, will you? ;-)

The whole getaway seems like a lot of fun. Welcome back to blogland!

You have more clothes than I've changed diapers. That's a lot!

I felt sick on the California ride. And I flipped off my shoes!

I'm impressed that you knew when the Space Mountain photo was going to take so that you could make that face. Unless you looked like that the whole ride though ...

I am confused by the flip flops in one of your work clothes pictures.... it must have been warm that day which I can't really fathom seeing as how it's snowing like mad here.
Sounds like you had a great time at Disney!!! I love that you got to swing dance, and get your students into it....that's so incredibly awesome!

tali - yeah, space mountain i definitely know well enough to time it for the photo. the funny one was on california screamin, the coaster at california adventure, where tpiglette and i were trying to set up a photo, but i kept forgetting where it takes, so i kept yelling, "i think this is it!" (we pose... and wait...) "no nevermind!"

On day I'm so going to have some style just like you.