For those who haven't already heard, my high school dedicated their new gym to my father. Dad was a math teacher, coach, and athletic director at that school for 16 years before he died. It was a great honor for him and for us. 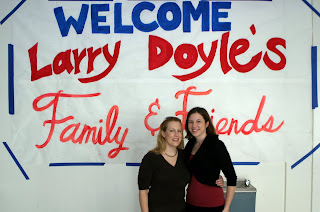 Seeser and I pose with one of the many welcome signs.

Mom and Seeser drove in from Vegas; I flew in from the Bay Area. I guess it was a bit inconvenient, but I couldn't believe how many people seemed surprised that we made the effort. Um, hello? However important he was to that high school, he was a million times more important to us. So when we found out they'd be dedicating the gym to him, we knew we'd be there, come hell or high water.

We arrived at the school early in the morning for a small breakfast reception. As we munched on donuts and sipped on Starbucks (even MonkeyDuck had some!), little by little, my childhood came to life before my eyes. Men and women who'd known my dad - worked with him, taught with him, coached with him - began arriving to celebrate his legacy. Some of these people I hadn't seen since I was a little girl, and it was an overwhelming sense of nostalgia that washed over me. I was touched that so many had turned out to honor my dad.

We took a tour of the new gym, and it was another rush of memories. So many hours of Seeser's and my childhoods were spent in the old gym, and we looked at all the improvements they'd made with a mix of admiration and sadness. "They locked up the sides of the bleachers," I said with disappointment. "I spent so many hours playing under the bleachers - finding badminton birdies and pretending they were dolls, running races with friends." Seeser also expressed sadness: "I used to climb up the backs of the seats and dangle there before jumping down." (Yeah, she's the reason they locked them up - at least my activities were safe.)

Inside the gym, above the main doors, hangs an eight-foot-tall basketball jersey with my dad's name: 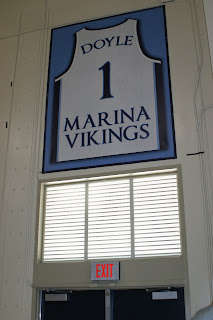 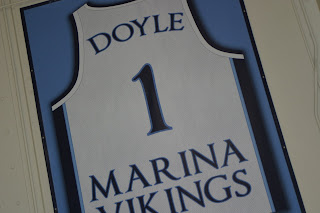 And on the outside, above those same doors, hangs a beautiful plaque: 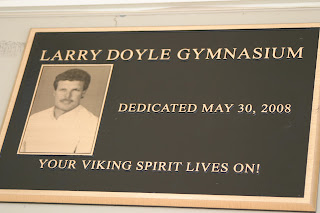 That picture is probably circa late 80's or early 90's.

After we finished up our donuts and coffee, we headed out to a ribbon cutting ceremony to officially open the gym. The principal said some very nice words about my dad and his legacy at the school. Even though this man never knew my dad - he started working at the school only three years ago, but my dad died nine years ago - he said he felt like he knew him because of how often people still fondly talk about him. He talked about how many hours my dad put into the school, and how fitting it is that the gym be named for someone with such dedication to his work and his students. Very nice stuff all around, and I'm quite grateful to him for his words.

Then it was time for the rally. We sat down and waited while the students all filed in, and then the rally began with a memorial video of my dad. I wasn't sure how my emotions would be, but with the very first picture of my dad, my eyes filled with tears. The video was beautiful, photos mixed with video of his colleagues sharing memories. Everyone said wonderful things about him, and I'll definitely share the video at some point so anyone who's interested can watch and learn a bit more about how great my dad was.

After the video ended, we went out to the middle of the floor where the principal presented us with this commemorative plaque: 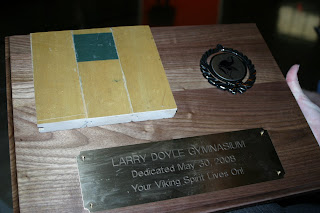 Those planks up in the corner are from the old gym floor. The great thing is that with as much time as Seeser and I spent in that building, there's a good chance that we actually crawled and/or walked on that very piece of floor multiple times. 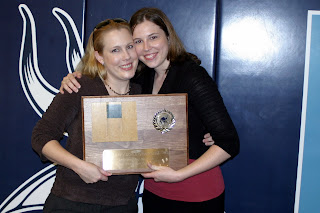 Afterwards, we chatted with some former teachers before heading out to visit my dad at the cemetery. Every time we go, we make sure to bring some wet wipes to wash his stone off: 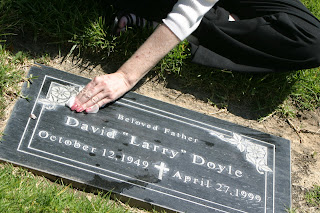 Because dead or not, no one deserves a dirty tombstone. 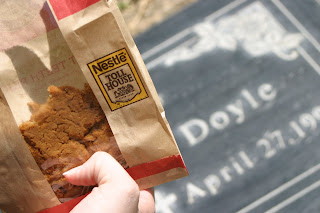 Yes, you're seeing that right: She brought him a chocolate chip cookie. She ate most of it herself, but she did leave a little bit there for him as well. (Or maybe more for the ants that often visit him.)

Before we left, we had a family moment, telling Dad that it had been a good day, and that we were proud of him. 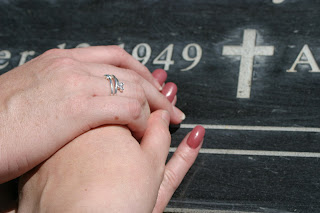 The four of us, together.

This was beautiful. Thank you so much for sharing it!

That was great - really great post. Thanks for sharing that special moment!

I knew this was going to make me cry. So nice to see the expression of love and respect for someone that was and continues to be such a huge part of your heart.

What a beautiful post for a beautiful day. I love when great things get done for great people and your dad sounds like he was loved by many. P.S. The cookies made me laugh! I love that!

And what a wonderful tribute to the work your dad did at his school.

It's wonderful that the school created such a beautiful, lasting tribute to your dad.

Laura, thanks for sharing. I am so proud of the way you handled this special day. It must have been hard in so many ways to experience such a day, but your post is so positive. Thanks for letting us share in your special day. You brought tears to my eyes.

I needed a good cry today!

That is so cool and such an honor! I'm glad that you were able to make it and celebrate your dad that way.

What a beautiful tribute to your dad - both theirs and yours.

So wonderful to read about the love and joy for your dad, his memory and the dedication to him. I'm teary and smiling as I write this and I thank you for sharing.

And I LOVE that your sister brought a cookie to the cemetery.