Let's Go for Something a Little Cheerier, Yes?

Sorry about yesterday's post, guys. I was in a major funk. You want to know what the funk was about? (If you're one of the readers emphatically shouting, "No! God, please spare us!" then feel free to skip down to the next section.) My funk was the result of two simultaneously occurring stories:

Batman got very sick starting about a week ago. We had plans to see each other Tuesday night, but I knew he was feeling pretty sick. I went over in the hopes of helping him feel a bit better, but after some low-key hanging out left without having accomplished much. I talked to him on Wednesday and Thursday, hearing about how it was getting worse and the doctors he'd seen weren't helping much. Friday night he was much worse, and so instead of going out we stayed in and watched a movie. At one point in the night, I was literally on the verge of tears - seeing him in that much pain and being unable to help was killing me. I tucked him in and left, but an hour later he ended up having to go to the ER, and he was there all night. Saturday he was a bit better, so I stopped by to see him before running out to a going-away party for a friend of mine for a bit. I went back to his place later to see him again and see if I could bring him anything, but I left before it got too late, so that he could get some sleep. We planned to get together again on Sunday, but when I talked to him he was feeling pretty bad again, so I decided it would be better if he just got some rest. I was feeling so awful about how sick he was, and I really wanted to do something to help, but it just didn't look like there was much I could do.

Now, at the same time that Batman is enduring this horrible illness and I'm feeling terrible on his behalf...

Batman and I have a pretty good thing going. We're not getting too serious too fast, but we're definitely enjoying each other's company when we can. And then he got sick, and our time together got totally slashed. 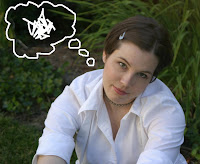 I was very disappointed that our Friday plans had to be canceled, because we were supposed to go to a dance event that I'd really been looking forward to. I knew he was feeling really bad when I left, but I kept hoping he would be better by Saturday. I had a party to go to that was likely going to be attended by some people I was really anxious about seeing, and I needed him by my side. But then I found out that he'd had to go to the ER, so of course I went alone. I saw him only briefly that night, and we were surrounded by other people the whole time, and by Sunday he was too sick to even see me. And now it's looking like he might have to miss a HUGE dance event this coming Friday - an event I look forward to all year long, and he might not be able to be there with me. I was feeling incredibly frustrated and annoyed, not at Batman, but at the timing of his illness and how many of our plans had been ruined.

Here's the thing: I managed to convince myself that by feeling upset about missing out on things I had wanted to do with Batman, I was somehow not being compassionate enough about his sickness. Like by experiencing legitimate emotions, it completely devalued my other legitimate emotions. I decided was a bad person for thinking of myself when Batman was suffering so much, even though, well, thinking of myself wasn't actually preventing me from feeling bad for Batman.

Wow, did any of that even make sense? At any rate, I talked to Batman a bit about it today, and we agreed that we both got dealt a crappy hand by this stupid virus he's got, but that it can only get better from here.

And now, a little something I like to call, "Things I Never Fail to Underestimate":

- The extra time I will need to allow for snoozing my alarm in the morning.
- How many trains will want to pass exactly when I need to drive across the tracks.
- How many people will want Starbucks exactly when I want to buy my morning coffee.
- How long it takes to get shoes and socks on a toddler... or a sweater on a cat.
- My own laziness.
- The stubbornness of all male human beings.
- The number of things that can go wrong when baking.
- The depths to which my immature sense of humor can sink.
- The extent to which talking to my mother can improve my commute home.
- The number of spam e-mailers who seem to think I need penis enlargement products.
- How many people will have updated their blogs during my work day.
- The effects of a strong drink on an empty stomach.
- Travel time to... well, pretty much any destination that is not work.
- What one kiss from Batman can do to my insides.

What have you been underestimating lately?
Posted by Lara at 11:45 PM

The time it takes to recover from childbirth...there are mountains to hike and kids to push on swings and twirl in the air, darn it.

I've been underestimating the capacity of some of my students to be stupid, hostile, ridiculous and dangerous, all at the same time.

Never underestimate the amount of time I am capable of spending procrastinating with the internet as my only tool. =)

So I think I understand your mixed emotions. What puzzled me, however, is your picture. I think, with that little scratches in the corner, you were signifying how frustrated you felt. Yet, you look so adorable that your message might have been diluted.

Never underestimate your cuteness to undermine your own expression of frustration. :-P

sending get well wishes to Batman. I totally understand your feelings - as women we are made for the guilt. I'm really good at feeling guilty for someone that I really shouldn't.

Random question: are you going to Jen Lancaster's book signing on Wednesday in SF?

i always underestimate the power of rainbow sherbet. It really cures everything. Everything.