Sometimes it's easy to get so used to being in our comfort zones that we don't even realize what life might be like from another perspective. It's always good to shake things up and try something new, just to find out how it goes. What follows might be just a small example of that concept, but I think it's valid anyway.

Last summer, I was lucky enough to be part of a large dance show at Stanford. It was a bit more exciting than most dance shows I'm in, mostly because of all the costume changes I had. I was performing with my swing troupe and two vintage dance groups; my costumes for the night included:

Wait, did that last one say... ? Yes, it did. For a Victorian piece we performed, one of the boys had injured his knee a few weeks before and wouldn't be able to dance. Rather than cancel the piece, the directors of the troupe asked me to fill in. As a man.

Well you all know me, I'm up for anything. So I went around to various friends asking to borrow clothes and eventually I got myself a tailcoat, a tuxedo shirt, a white vest, a white bow tie, and tuxedo pants for the piece. I looked very silly, if you ask me, but others said it was a charming effect. What do you think? 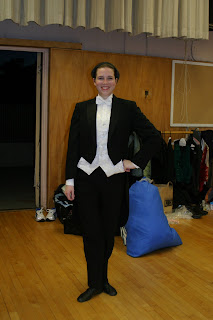 I went out and performed pretty well, considering it was a piece I didn't know all that well to begin with, and certainly not one I knew from the man's side. It was a strange experience, to suddenly be doing something I'd done for years - performing dance - but from a completely new perspective. The things I normally think about during a dance were all secondary, like looking graceful or connecting with the audience; mostly I thought about leading my partner and keeping the correct spacing on the floor. Quite a different experience, but not in a bad way.

And in the end? I think I did just as well as any man could have done. 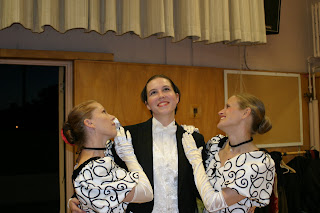 We think you did well, too, Lara.

This post was written as part of a fun blog blast for Ask Patty, a great automotive site geared towards women, to promote their new MyCarPage feature. The Parent Bloggers Network - a fantastic group of folks - engineered this weekend's blog blast, asking us women what we can do just as well as any men out there.

So how about it, ladies? What can you do just as well as the boys?

And to my male readers - any stereotypically feminine pursuits at which you particularly excel? I'd love to hear about it!
Posted by Lara at 10:11 PM

When my sister and reached driving age, the task of teaching us fell to my father. He started off by showing us the most important engine parts and made us practice changing tyres until we were fast and flawless. I've had to do this for guys for my dates! I can change a tyre better than most men can!

WELL! Now I've got Victor/Victoria in my head!

Hmmm - what do I do just as well as a man? I'm pretty good with money; stereotypically, women are lousy at balancing checkbooks and keeping to budgets, but not this woman.

I'm not good at anything that involves motors or engines or electricity or grease, though - I can be pretty girly that way...

What a great take on the blast! You looked quite dapper.

Switching roles is fun. I still love following swing with you, for instance. The lipstick with the tux kind of affects the overall look, though. :-)

Ooh, ooh, I pick "talk about my feelings" for something I'm good at.

Also, I can change a tire, but I can't find my way around an engine, and need to keep looking up in my manual which one of the jumper cables to attach to the frame, cause I never remember.

Personally, I always get a little indignant at the stereotype that girls can't read maps. I can handle spatial orientation just fine, thank you! :-P

That's so incredible Lara, and I agree. You totally look cute!!!

That's very cool that you were able to jump in like that. I would also love to see a pic of the two ballgowns. :-)

I guess one thing I can do as good as boys - bait my own fishing hook and take a fish off the hook when caught (unless its a catfish then I won't touch it.) I even went fishing with a "tom boy" and she had everyone doing it for her - it was kind of funny.

De lurking (which I should really do more often on your site, I'm sorry) to say that I think the answer is that women can do ANYTHING just as good, if not better, then men. But that's my all women's college education speaking....fun post, I loved the costume!

You seem to look adorable as a man as well as a woman! That's a tough thing to do!

I always work from the attitude that gender shouldn't matter for what one can do well. On some of those "stereotypically" female things: I sew, knit, crochet, am hopefully getting better at being a follow in dancing, can do makeup, ...

Though knitting is typically thought of as a female endeavor, it is believed that men made up the majority of knitters (sailors) when the craft first began. So, perhaps knitting should be questionable on that list. ;-)