If I Got Paid For This, It Wouldn't Be a Problem 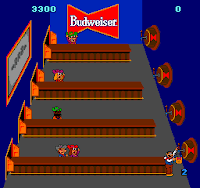 Did any of you used to play that game Tapper? You're this poor schmuck bartender who has to keep serving thirsty customers pitchers of beer or else they get mad and throw you down the bar. So you better be watching all four bars and every single customer to make sure that while you're filling one's pitcher the others aren't getting too close to empty, because God forbid one of those pitchers falls and breaks and you're faced with an angry drunken bowling league. Keep those pitchers moving! Don't fall behind! Watch out - they're coming faster!

Who smells a metaphor?

Having three separate blogs is great - don't get me wrong - but it, uh, takes a not-insignificant amount of work to keep them all up-to-date. I used to have down time every few days in between updates here, and I would think about possible topics to write about, catch up on my favorite bloggers' lives, and, you know, sleep. (But only once in a while.)

Now, there's pretty much no down time, because I update one, then another, then the third, and by the time I'm done, it's time to go back and update the first again. Now, if I could spend a huge four or five hour chunk of time on blogging, I could update all three in one fell swoop and take a couple days to bask in all the comment-y goodness (ha!). But sadly, at the end of the day, it's tough to spend more than an hour or so on the blogs, which means three blogs in three days. And that means blogging every day to keep them from becoming horribly stagnant.

Am I whining? Yeah, of course, but it's my blog, so that's my prerogative. Am I annoyed enough to shut down any of the blogs? Hell no - I love blogging too much to stop!

Time for a reader poll...

Speaking of blogging and how much I love it - BlogHer '08 anyone? I registered, and I am SO EXCITED to finally attend my first BlogHer! Early bird registration ends February 28, so if you want to join me in meeting and interacting with tons of awesome women (and men!) from the blogosphere, sign up today!

Plus, as a bonus, I want a roommate to keep me company in the big lonely hotel room that I would like to reserve in lovely San Francisco. Anyone interested?
Posted by Lara at 11:59 PM

2. If you were going to start a second (or third, or first) blog, what would the topic be?

3. If I were to start a fourth blog, what should the topic be?

4. Will you tell me when I've hit the absolute rock-bottom of navel-gazing egomania?

There is no limit to the depths of belly-button meditation. Unless your meditation is sharp and pointy, in which case depths even a little below the surface can be fraught with danger.

Since I subscribe to all of your blogs, it sort of arrives in my feed inbox like one blog but organized into themes.

I've started a few different blog experiments though they haven't amounted to anything yet. I started a faith blog too a while ago to keep track of my journey, but I need to redo it. I'm starting to use a blog as my notebook for Web research on topics such as science and medicine. But since I've been ill, I haven't really been able to do any blogging and none of these are fit for public consumption yet.

1. I agree with Aussie boy, I think you're spreading yourself too thin. Don't get me wrong, I like all three, but they are a lot of work!

2. I wish I knew. I have some dormant addresses that I'm itching to use.

I keep two blogs - one for my personal life and one for my professional. I write every day for the personal one and only as the muse strikes for the professional; I have no trouble keeping up, but I don't know that I could make a third blog work.

I would LOVE to go to BlogHer, but that's the week I'll be at the Summer Institute on Holocaust Studies at Not-So-Local College. I'm setting my sights on '09...

1. Kinda like dancing dragon said... think of the three blogs as folders. :)

2. Still pondering the possibility of starting a blog that uses nothing but photos to tell each story.

3. You can always start a meta-blog about blogging on the other three...

1. For me three blogs at this point would probably be too many. I cherish the 2-3 hours that I do have to sleep. But I say if you can do it without making yourself nuts, then go for it!

2. If I were going to have another blog, it would probably be all photography. I haven't only because I am not sure that I could keep it updated with an appropriate frequency, and also because I use photos in a lot of my regular blog content anyway. THe thought of something up with something else instead of the photos is totally overwhelming.

4. There's no such thing as rock bottom when it comes to naval gazing. :)

Honestly, three blogs is too much to keep up with. It can be tricky enough keeping up with just the one. Why not combine all three? Just because they're different aspects of your life doesn't mean you need to physically divide them.

1. I think it's just right, as long as you enjoy doing all three of them. I think most of your readers realize that you're doing all three, and will understand if you don't spend every waking hour trying to keep them all updated. Not to mention that most people read more than just one of them, so it's not like we're simply waiting for you to update one, we get to read the others inbetween.
2. Well, at the moment, I have my personal blog, which is a random collection of stuff, and a group blog which is used to keep in touch with friends. If I had to start a third... hmm, that's tough. Nothing at all is coming to mind at the moment.
3. Oh, I don't know. Whatever you wanted to write aobut; I'm sure you'd come up with something interesting.
4. Not likely - I don't think you will.

1. I think
b log(n) = 3,
where n is the number of blogs and b is the so-called universal blogarithm constant introduced by the eminent mathematician Ineda Pruf, is the only way to go.

2. A. and my adventures bicycling all over the Santa Cruz and Bay Area.

3. One Blog to rule them all. One Blog to find them (for those of us who don't use RSS), / One Blog to bring them all and to an IP address bind them / In the Blogosphere where the Lara groupies lie.

4. Here's a tip: The rock bottom is a lot deeper if you have an innie rather than an outtie. Have an outtie but want an innie? Then try the patent-pending Bellybutton Quick Conversion Kit! As seen on the internet!

Whether you keep one blog or three, if the demands compromise your ability to enjoy life (or just get a good night's sleep), I'd say it might be time to cut down.

If I were in San Fran a mere two weeks later, I would SO bunk with you.

And I can barely keep my head above water with one sometimes, so I don't know how you do three.
:P

When updates become a chore then something is wrong - maybe you need to cut down the amount of work you do.

You could.
Delete/discontinue a blog (at risk of upsetting fan base and you not being able to update that blog when you feel in the mood).
Post less often in your tertiary blogs and focus on your primary (but once you post less often, its a slippery slope as you put it off more).
Copy paste into all three blogs!
Ask someone else to contribute (only just found this blog, not sure what your others are like, so this might be a bad suggestion) so the blog is updated, there is fresh style and material being used whilst you are relaxing :D

I think three blogs is too many. Two for me, would be a challenge. Blog Her sounds fun, when is it?

Lara-
Winners up today for the contest.
:)
Take a look.

A friend and I are thinking about going to BlogHer! Maybe I'll see you there!