We all knew the day would come, but it doesn't make it any easier to take. Bertie will be leaving us on Sunday. He's been adopted by some random (and almost certainly unworthy) dood named Alfred. Or Albert. Or Albatross. Something like that.

It won't be the same around here without this little guy. While Tenny took a day or two to get used to the little interloper, the two quickly became inseparable. They play together all the time, and Tenny, despite being twice Bertie's size, is always gentle with his little foster brother. When Bertie had to take medicine every day, he would always run straight to Tenny for comfort after choking it down, and Tenny would clean Bertie's face. Nora mostly just watches from her comfortable perches, but Tenny became Bertie's best friend.

And what of me? I've spent all day every day with him at home. He sleeps in my lap and climbs up to my shoulder and nips at my nose and begs for my food. I'm going to miss him so much when he's gone.

I can't deny, however, that I'm glad to know he'll be going to a good home, even if it won't have other cats to play with or my lap for Bertie to relax in. I'd love to foster more kittens in the future, even though it does cause me some heartache at the end. 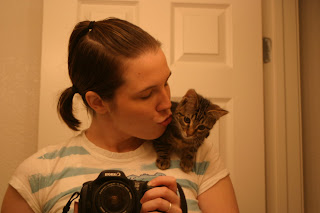 Today's LaBloShoeMo lesson is about finding a look you love and learning to use it in a variety of styles.

How many times has this happened to you: You find a great pair of shoes with a great little detail - a bow, an overlap, unique stitching - and you're thrilled. But then, for months, anything else you find with that detail is automatically off-limits because you already have it.

Well, it doesn't have to be that way, and I'll give you an example from my own shoe closet. Last year, I shared these dance shoes with you: 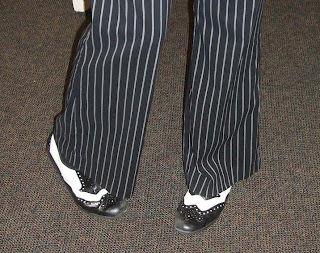 This style, for those unfamiliar with terminology, is called "wingtip" (or sometimes "wing tip" as two words). Most distinguishing features include the tip that points back towards the ankle, and the holes that originally designated perforations along the curve near the toe. It was very popular in men's shoes starting around the 1920's, and can still be found in nice menswear today.

Wingtip shoes began showing up in women's shoes slightly later, and I love it. Probably this stems from my love of retro style in general, particularly things from the swing era. These dance shoes were bought for a swing performance group, but I think they're great shoes no matter what. They are also not my only wingtips.

Okay, here you can see two pairs of wingtip flats. These also include a T-strap, which - again, for those unfamiliar with terminology - is any design that has a strap going vertically up the foot meeting up with a strap that goes across the foot. (Bored yet?) They're not the exact same shoe in different colors, as you should be able to see if you look somewhat closely. They are, however, very similar, and I'm totally okay with that. The minor differences in them, as well as the difference in color, means I don't feel that I'm allowing myself to fall into a shoe rut. 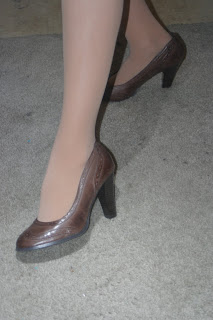 That's right - brown wingtip pumps. Unless you were looking closely for the common tie here - the wingtip design - would you realize that all of these shoes were related? Would you look at these four pairs and say that I'm just repeating myself? Probably not. I found a style I loved and I found a way to tie it into multiple pairs of shoes.

Bottom line? Don't shut yourself out of a given style or design just because you already own it somewhere in your closet. Just look for a new way to tie it into your wardrobe and you'll be much happier with yourself and your purchases.
Posted by Lara at 11:43 PM

Having to give up that adorable kitty would just crush me and do me in! Hugs!

Psst... I left something for you over at my place ;)

I LOVE the shoe education. Thank you, thank you!

Even though the kitty won't be loved by YOU anymore (which, really, would be the BEST love), he'll be fine. We never believe that anyone can love our kids as well as we can (and we're right) but different love is still love...

I love those wingtips! All of them!

Your post made me cry.....
I hardly know the little dude, only saw him once, but I feel like my heart is being ripped out.
You girls did a fantastic job with him. Albatross is one lucky guy.

Kittens and shoes! These are a few of my favorite things!

I'm sure Bertie will miss you guys just as much as you miss him!

And the wingtip flats, I have NEVER seen before. I think I need to find a pair.

You could be a shoe model! Check out your poses. Good stuff. I love the dance shoes in pic #1. My mom and I have decided the whole look in that pic is very "criminal" or mafiosa.

Where have you been while I've been having my breakdowns? :) I think if someone took away my pooch I would freak out! You are so noble for fostering animals!

Ohhhh... bye little buddy. He's so lucky he had you even for a little while. Although I'm sure the new parent will be just fine!

Awwww he's so cute! Fostering is hard. :( But, if you kept him then you wouldn't have room to save more babies...does that help? and also, your shoe collection is to die for.

Sounds to me like Jitta might need a kitty of her own to love for the holidays! If all of us bloggers chip in let's get her one! And then your Tenny won't be lonely anymore either! LOL!

mks - actually tenny is jitta's, as is nora, our other cat. she shares them with me, but they're actually both hers. :-P