Last night I went babysitting for Kai, a child I've been watching on and off for about six months now. He's a cutie, and is learning more and more words all the time, which is fun to see. One of my favorite things about sitting for him is that he's a bedtime snuggler. When it's time to get ready for bed, he grabs a few books and climbs into my lap to snuggle while I read to him. He lays his head on my chest and lies quietly while I read, and it just makes me sigh happily to have such precious time.

Well, last night, he handed me one of his Hebrew books. While I do speak a number of foreign languages, Hebrew is not one of them. My knowledge of Hebrew is almost entirely limited to what I picked up from J. during various Jewish holiday prayers. I sort of made up a story as I flipped through the pages, and Kai didn't seem to mind too much. But later, after he'd gone to bed, I picked up the book again to try to figure out the real story. This is what I came up with: 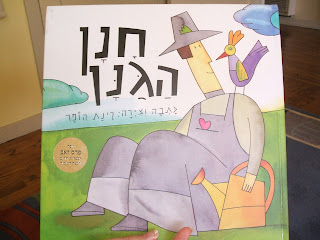 Archibald Deusenheim
The tale of a racist gardener 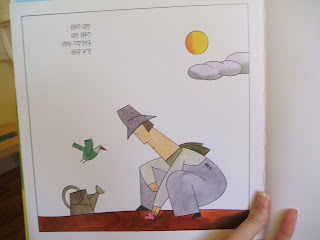 Once upon a time, a racist gardener named Archibald Deusenheim planted the heart of his most recent hate-crime victim in his garden. 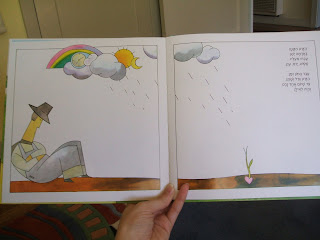 As Archibald slept off a particularly nasty hangover, the heart began to grow with the help of the sun, the moon, some clouds, a rainbow, acid rain, and a large floating clock. 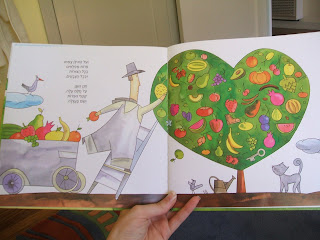 Far sooner than was reasonably possible, a heart-shaped tree sprung from the ground. Seemingly pasted to it were all manner of... items. In addition to the standard tree fruits, Archibald also found a key, a boot, and what appears to be a very large sausage. A stray cat began following Archibald in the hopes of catching some scraps. Or rabies. 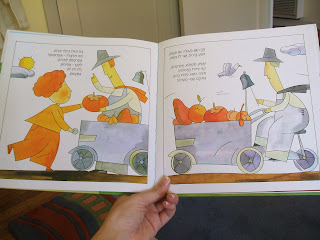 After harvesting his loot, Archibald went on his racist way, segregating the loot by color and passing them out the same way. The androgynous orange being got the orange foods, and in return, turned the gardener's hair and scarf orange. 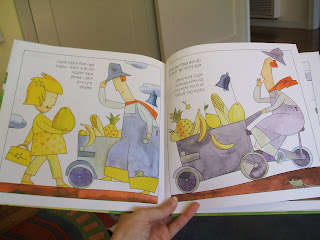 A yellow pregnant lady got the yellow foods, and in return, turned Archibald's pants and shoes yellow. She also craftily managed to sneak a mouse in those same pants. 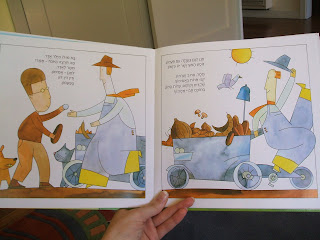 Nerdy brown boy got the brown foods (including the sausage and the boot), turning Archibald's hat brown. The mouse, while possible still in the pants, is no longer visible. A green girl in ugly parachute pants got all the green food and turned Archibald's overalls green. 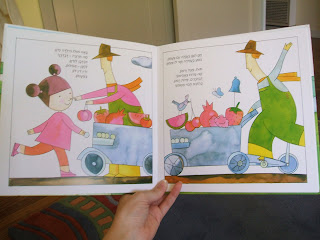 Finally, a small pink girl received the pink foods, including a strawberry the size of a watermelon. In exchange, she turned Archibald's shirt pink and he inappropriately touched her on the nose. 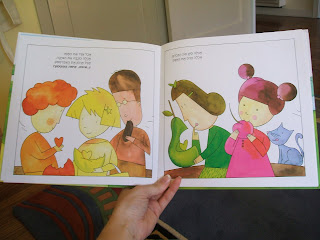 As they each bit into their color-sorted foods, they found... human hearts! 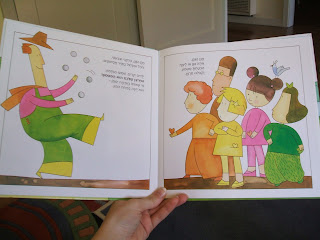 "Whose hearts are these?" they asked. But Archibald just laughed and juggled balled-up gray matter. "People who ask too many questions end up dead around me," he said with a grin. 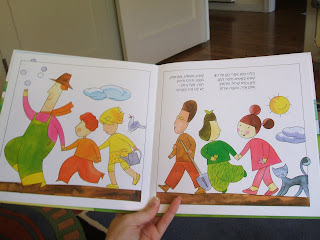 They laughed to hide their fear and followed Archibald, hearts in hands. 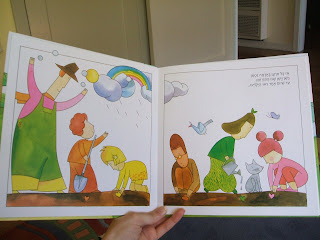 Under sun, moon, rainbow, rain, and gray matter, they planted the hearts nervously. Orange person reached up to the heavens in fervent hope of salvation. 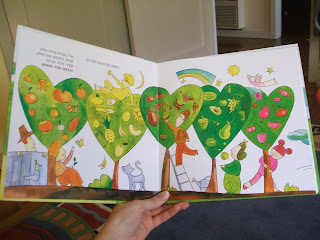 Far sooner than was reasonably possible, trees sprang up, this time in monochrome themes. Disturbingly, the pink girl's tree included someone's lips, perhaps as a warning that other colors stay away from her area. 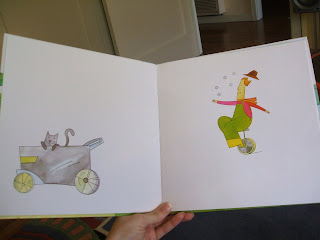 And Archibald the racist gardener rolled away on his unicycle - which appeared out of nowhere - still juggling people's brains. Presumably, the mouse is still in his pants to this day.

Who needs to read Hebrew? I think it's pretty clear that I got the major storyline right.
Do you disagree?
Posted by Lara at 10:53 PM

Best kids story ever, my niece would have loved this last night.

I am SO not sure what I would have come up with - but I'm a bit astounded by the limitlessness of your imagination! lol!

I think I just peed my pants. AND I have to go get laundry detergent. Gee, thanks Lara.

A brand new career path has just opened up for you - children's author! Is there no end to your talents?

that was sheer creativity! glad to have stumbled upon you on blogrush! (so who says this widget is useless and a piece of crap?!)

There is a reason that you work with children, your imagination and creativity supass that of any adult I have ever met...and I mean that in a great way!

Ah! Another great story... I was just thinking of your lizard friends the other day...

creative? yes, i can be at times. i have a sneaking suspicion, however, that if i ever tried to get a kids' book like this published, i'd be seriously rejected. :-P

You need to have a "Do Not Read This Post While Consuming Beverages" warning on this. I only narrowly averted a tragic laptop/mouthful of water incident.

Ahem. So about the pants thing. Heh.

That's pretty much my favorite kids story ever. Don't you love weird books in foreign languages? Do you think that the illustrators consider what someone who didn't know what the words said would interpret of their pictures?

On a side note, I'll be in Walnut Creek for Thanksgiving for a week if you feel like meeting up with a fellow blogger and talking about teacher stuff, or whatever :)

Who would have guessed that a mere six days after writing about a mouse in Mr. Deusenheim's pants, you would write about a kitten in your sweatshirt?