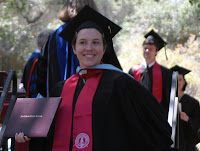 Sunday was my second Stanford graduation. My first gradation was in June of 2004, when I received my Bachelor's degree in English. Mom, Seeser, Seeser's boyfriend at the time, and J. all came to cheer me on, and it was a huge deal. I was excited by the pomp of the entire event - I excitedly attended the main ceremony at the stadium and listened to Sandra Day O'Connor give our commencement speech. I proudly stood with the other undergraduates as the University President conferred our degrees. I waved into the stands without having any idea where my family was, just to wave with all the enthusiasm of a new graduate. And when I walked across the stage at my department ceremony and received my diploma, I beamed with pride. After the ceremony, we went out to a fancy lunch - me, in my brand new graduation dress, with manicured nails and pedicured toes and fancy hair and makeup, surrounded by those who loved me. All I had done in the four years leading up to that day was temporarily forgotten in the face of such grandeur, and I had a wonderful time.

A mere three years later, I found myself facing a very different graduation. My mom and I were attending alone this time, and I thought about preparing for the ceremony the barest amount possible. My hair? Washed and left to air dry. My nails? Not even filed to a uniform length. My toes? Painted about a week and a half ago and already chipping. My dress? A Target smock I picked up numerous years ago and had largely forgotten about in my vast wardrobe. We opted to sleep in and skip the stadium ceremony - I don't even know who the commencement speaker was. When we arrived at the education department's ceremony, I found myself just wishing it would end quickly so we could get back home and out of the heat. I kept wondering if it was really worth it to come, because after all, it was just a ceremony.

That was one of the biggest differences between the two graduations, I realized later. In 2004, the graduation itself was all that seemed to matter. In 2007, however, the graduation was unimportant. It was the 11 months and 23 days leading up to the graduation that merited celebration, and I didn't need to sit outside in a cap and gown to do that. Only about half of what I accomplished over this last year - if even that much - is represented in that little piece of paper that says "Master of Arts" on it. And while it felt nice to walk across that stage, have a hood placed around my neck, and receive a second Stanford degree, it felt nicer just to be alive after all this time.

If looking back over my time at Stanford was one big difference between 2004 and 2007, looking ahead to my future was the other. When I began my undergraduate career in September of 2000, I had no idea what the future held for me. I didn't know what my major would be, or what job I would get. I didn't know if I'd move back to SoCal after college, or go live with my mom in Vegas, or maybe even live somewhere else entirely. My life was a blank slate, and I was mostly okay with that, because I figured I could write it out during my four years at Stanford.

By the time I graduated with my English degree, I felt quite secure. I was headed to UCLA Law School, I was happily committed to a relationship with J. - life was looking good. My four years had secured a future for me, and I liked what I saw. 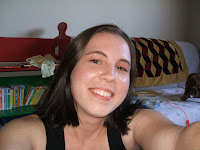 My tenure at Stanford this time was very much the opposite. Entering my program in June of 2006, my future was set. J. and I were engaged, and that meant I knew who would be by my side for the next fifty or sixty years of my life, through whatever would come to pass. I had found my true calling in the professional world, and I was taking steps to become the greatest high school English teacher I could be. I knew everything there was to know about where my life was going and how I would get there.

Less than a year later, I found myself facing a giant question mark. While J. is still a dear friend, our romantic relationship has ended (for those keeping score, today would have been our fourth anniversary), and when I look ahead to 10 years from now, I have no idea who will be by my side, if anyone. And worst of all, I don't know what I'm supposed to do with my life in my career path. I'm more certain than ever that I'm meant to be a teacher, but I'm less certain than ever how I should do that. Is teaching 180 different teenage students every nine months in a public high school really the best way for me to use my gifts? Should I be in a smaller school? Private school? Should I be doing more one-on-one work? Should I be working with older students, perhaps at community college? Or should I go back to teaching young children, infants and toddlers? How can I best be a teacher in this world?

I went back to school to learn more, and I find that I'm more confused than ever. Maybe, though, that's a good thing. As English teachers, I believe one of our jobs is to get our students comfortable with confusion. Sometimes, being confused, perplexed, and struggling through a difficult topic is the first step towards real wisdom. I ask my students to think about things like, "How do our words affect people's perceptions of us?" and "What does it mean to be a hero in today's society?" If my students feel those questions are quick and easy to answer, I don't think they're really understanding the questions. They're only really learning and understanding if they're puzzled and uncertain.

Maybe the same is true for me. Maybe this uncertainty in my future is the first step towards peace.

Lovely reflection dear, both in concept and in the mirror.

I don't know about you, but the reason I teach English is to help them get rid of that "confusion" that they experience by expressing themselves through writing.

And it's definitely worth having 180 students a day when you get to see the way they open up to you when they write, when they speak, and when they interact with one another.

Here is the transcript of the commencement address given by the poet Dana Gioia:
http://news-service.stanford.edu/news/2007/june20/gradtrans-062007.html

I think parts of it have some relevance to your future as an English teacher.

Very insightful. I understand where you're coming from - i feel the same way about entering freshman year of college vs. entering coterm this fall. I think this uncertaintly that you're feeling might help you learn the most about yourself.

I think that's something to do with life, or maybe life as a 20-something, or life in the 21st century, or... Just my point (and yours - so good connecting post, then).
Everything seems to be more uncertain with every year. Occasionally I envy those people who just KNOW all they want and plan to do. But more often I'm relieved to not be "in" a box. And then I fear that's the point - I am so afraid of the box, I don't let myself focus on what the box might look like - I just run around in fear.
I AM working on this. Or at least thinking about working on this. :)

I find that when I try to plan out where I'll be and when I'll go there, I run into wall after wall. But when I take small steps (meeting new people, calling to ask for references) and don't make any concrete plans, doors open all over the place. Prayer helps too.

It sounds as though you're wide open to any possibility. It won't be long before one finds you.

congrats, from a stanford alum. sounds like you're doing just fine...

Congratulations! You put down your feelings in a beautiful way. I had the same feeling at my MA graduation. I sent out like 40 letters to get a job, but didn't find a thing. Finally I decided to get another MA in education and now I am a teacher. I ended up in a totally different field than I ever expected myself to be, but somehow that makes life exciting too.

seth - i think they can write through the confusion, but i think the writing usually just leads to more confusion. i might be able to write through my befuddlement about one question, but in the end, how many more questions will i have asked? i need to learn to be okay with not always knowing every answer - with knowing that sometimes there is no "answer" - and continue learning and exploring anyway. *that's* what i want my students to learn.

franze - thanks for that!

CC - i agree. i'll grow the most when i'm stretched.

jill b - i think it's okay for me to be learning and growing and exploring for now. i'm just worried that i'll never move on and feel certain about anything. and uncertainty forever scares me a bit.

tense teacher - here's hoping. all i need is that opportunity.

shelly - howdy, fellow stanfordite! thanks for stopping by, and for your kind words.

frumteacher - yeah, we'll see what happens from here. i'm in the job search part now, but i'm keeping a lot of options open. Hopefully something good will happen soon. :)

Lara-
First of all congratulations!!!!! What an amazing accomplishment and what a journey you have had.
I think that you are exactly where you need to be in your thought process as far as questioning everything and feeling like there are so many options. Enjoy that the world is your oyster and breathe!
Your are an amazing writer and person!