It's Sunday, and once again, there is no Google-age to be found. What can I say? You all told me, in no uncertain terms, to spend my time with the Aussie and ditch the blog. I'm touched that you all want to put my welfare above your blog-walking, but I have to wonder if maybe y'all just don't like my blog very much, and this isn't your way of telling me to just give it up already. Well, to that I say that you can't get rid of me that easily. Ha! So, even though there are no searches today, there is a short post, complete with a cute picture.


Last night, I went out to perform with my swing troupe at a charity benefit. It was a good time, and the dancing went well. We got some nice professional pictures later in the night as a free gift for performing, but I haven't scanned those yet, so you'll have to wait. Instead, I give you this pic, from the pre-performance silliness: 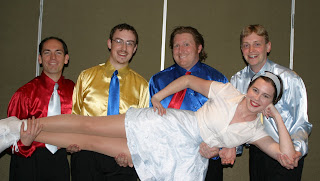 Important things to notice about this picture:
After the performance, a bunch of us went to Bubba D's to play board games. During a round of "ImaginIff..." I was the subject of this question:

ImaginIff... Lara were a sports penalty. Which would she be?
I want to know what you all would say! When I respond in the comments, I'll let you know what I and others thought at the time...

And for today's flower, I give you a specimen from the hotel lobby at the gig last night: 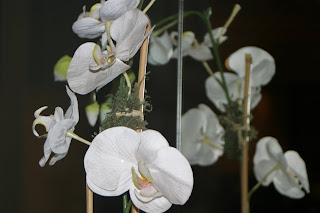 Labels: Mix It Up

i want to think up a new penalty. like high sticking or something. or SLASHING. i'll come up with something.

Oh Oh I go head-butting. Because it's a cool word. And looks cool when done by Buffy. Ummm and because you could totally knock people out with the sexy flower headband. :P

Hee hee. Is really funny, he is like cupping the air around your boosie.

I gotta go with Excessive Celebration. I mean if your going to get in trouble don't you want it for being too happy?

The big decisions in life, do I help support her as is kind of needed but risk the accidental boob graze and the awkward sorry that follows or let my arm dangle and hold her in a less supportive way? Obviously move hand over a little didn't come to mind for him. At least he didn't go for the blatant grab and a giggle.

Excessive Celebration, ALL THE WAY! You are nothing if not a good time :)

Great photo!
I am glad that you are sticking to blogging. I always look forward to your insights and wittiness.
Keep it coming!

I vote for 3. Head-Butting... I selected that one because your blogs are generally thoughtful and/or thought-provoking and I found a way (in my mind if no where else) to make head butting the most cerebral of the penalties...

I also agree, please keep blogging, just do it at your pace/when it works for you... and when it doesn't interfere with lovey-ness with Aussie boy bc he sounds down-right kewl!

*for all those interested: the penalty chosen was "delay of game," followed closely by "false start." i'm pretty sure both of those are in relation to my dating life. :-P

jitta - SLASHING?! goodness, what kind of girl do you think i am?

kilgore trout - i do tend to get really enthusiastic about my celebrations, it's true. and yes, he was faced with a tough decision. i think he chose well.

tori - awww, thanks, lady. i can't imagine giving up blogging!

ffbgirl - thanks, kid. i've never been called cerebral before. :-P