Tuesday night marked my third rehearsal with my new swing group, and it was… um… what’s the word? Oh, right: crap-fucking-tastic. I’ve been finding the group unbelievably frustrating since I first joined, and Tuesday night was more of the same. In every group with whom I’ve ever danced, I’ve wanted nothing more than to move faster in rehearsals – i.e. I want to learn more choreography in less time. This is because I tend to pick up choreography rather quickly; other people will end up performing it better than I do, but I usually learn it first. 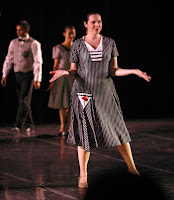 In rehearsals for this group, I consistently want to shout, “SLOW THE FUCK DOWN!” The concept of actually supporting us as we learn seems to be foreign to these people, and I find myself swept along by the current, occasionally slamming into rocks and rapids along the way. And by about 20 minutes into a three-hour rehearsal, I am ready to burst into tears because I feel like a Bad Dancer.

There is almost nothing I will claim to be good at. Under normal circumstances, I would say two: writing and dancing. And even then, I would likely make sure to quickly add that I’m good, but nowhere near great, and that there are many, many people better. But other than those two, the best you’ll get is “okay” or “not bad,” because I don’t really feel “good” at anything.

(And yes, before you ask, my therapist and I are already working on my shittacular self-esteem.)

Given that, you can understand how awful it is when I feel something has proven me bad at one of my two strengths; feeling like a bad dancer pretty much puts me halfway to worthless as far as I’m concerned. (Anyone feel like criticizing my writing? The comments are open, and my poor self-esteem welcomes the verbal abuse!) To feel it for the third week in a row, of course, is really just compounding an already horrendously painful issue.

Practically speaking, this means I spent the last hour or so of rehearsal biting back tears, and when I walked out the front door, I immediately burst out crying. What can I say? I despise feeling incompetent when it seems like I should be able to show competence. 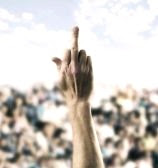 For the rest of that night, I continued to feel pretty crappy and weepy, wanting to basically tell the entire world to F--- off. The comment I left on Aly’s post was a clear enough indication of my mood that she sent me an email to ask if I was okay. I wanted to vent about it here in a post, but I did my daily blog walking instead and then collapsed into bed – as I mentioned in a brief post on my way to unconsciousness. As I lay there, drifting off to sleep, I consoled myself with the knowledge that I had spared you all, my dear friends and readers, the vicious verbal pounding I would have given myself for being such a failure at life, and dance in particular. And I thought to myself, just before falling asleep, “My life used to be funnier than this…”

The next morning, I woke up feeling a bit better, and as I got ready for work, I replayed the previous evening’s events, and realized that perhaps my life is still funny – I just don’t tend to notice it at the time. So I took another look at the night, with a fresh morning’s perspective…

Okay, so rehearsal still sucked – a good night’s sleep didn’t change that. I cried all the way home, angrily pounding the buttons on my radio in the hopes of finding something depressing enough to fit my mood. I settled on Salt N’ Pepa’s classic jam, “Shoop,” because really, when is that not a good idea? When I got home, I opened the door and stumbled in exhaustion into the living room. Still crying, I dropped my bags by the couch and dropped to the ground, laying my head on one of my black loafers (kicked off and forgotten the previous afternoon). Nora (aka Big Fat Fatty) came over to see me, meowing in my face to let me know that she did not appreciate being ignored by her faux mommy. But her close proximity must have alerted her to my rehearsal-produced surplus of sweat and grime, and she decided – what else? – to groom me.

Yes, folks, the Fattest Cat on the Planet decided *I* needed some beauty assistance. So she groomed me. She groomed me. With her tongue.

However, I was depressed, and beat-down tired, and I was going to shower anyway, so I let her continue her beauty regimen. She focused mostly on the left side of my head, since the right side was almost entirely shoved into the heel of my loafer. Every so often she had to pause to choke a bit, as my hair is about three times as long as hers, but generally she attacked my hair with a tenacity I don’t believe she’s ever shown in a non-eating activity. 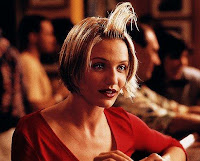 Eventually, when my face was sticky with cat saliva and rough from the sandpapery tongue-washing, my hair smelled appropriately of sweat, kitty litter, and tuna, and my face was imprinted with the oh-so-attractive stitching pattern of my loafers, I got up to take my shower. Fatty followed me, not wanting her project to go too far. When I got to the bathroom, I glanced in the mirror and jumped back in fear. Was that ME?! The entire left side of my hair was sticking straight up, a la Cameron Diaz in that one stupid movie that everyone else finds hilarious and I just don’t get. And the little race track across my right cheek? I looked like a plastic surgery “Don’t,” or maybe a Frankensteinian “Do.” I looked down accusingly at Nora, who stared up at me with wide eyes, her head tilted to the side as if to say, “What? What did I do?”

Imagine this stare-down: me, with my funked-out hair and stitched-up face, raising one eyebrow at Big Fat Fatty, who is feigning complete innocence as her ass spreads out around her in a massive black puddle of lard.

Who says my life isn’t funny?

Do you love your pet? Care for its well-being? Consider pet insurance with Pets Best. If you'd like to buy pet insurance, then why not get a quote for a pet insurance policy today?
Posted by Lara at 9:42 PM

:-/ I'm sorry to hear that rehearsals have been so rough. Boooo to them!

Definitely a funny kitty story though... :)

Brilliant! This post is brilliant. That sentence about "a Frankensteinian 'Do'" is brilliant. And the use of that image of the middle finger? Well, you get the idea.

I can understand where you're coming from with the incompetent-dancer thing. It's hard when that one skill (or one of two skills) you depended most on for confidence suddenly shatters. I know this will sound cliche, but try treating it as a learning experience. I know I did. You'll pull through!

That really made me smile. As gross as it is, I loved it when my cat, Glitter Puss, used to lick my eyelids.

I saw your comment on Aly's blog and I wanted to email you but I don't have your email address, so please know that I was thinking about you.

Definitely funnier than "Something About Mary"; I didn't get that movie, either. At least the fatty didn't suck on your ear until it felt as if it might fall off (that's what my fatty does). Ah, kitty love.

Girl, I can relate! This week sucked SO BAD for me I went through an entire box of kleenex... just in my office/at work. Perhaps because of that week-long workup (or maybe b/c of a big ole incident with my nose/sinuses about 8 years ago) I apparently had an excess of, ahem, mucous in my nasal passages. So, by the time I got to the end of your post, I was snorting with laughter, and I hope one of my fellow-Starbucks-at-the-airport friends saw the snot-ball fly out of my nose. Twas pretty funny, and I hate to keep humor to myself. Thanks, dear.

I can fully relate on feeling incompetent in the few areas I once regarded as talents. Trust me, I relate. I once called the experience "Stanford." Now it is named "Life in General."

The rest of your post was still freaking hilarious. I was laughing so hard at the description of Big Fat Fatty...especially the choking which resulted from the "tenacity" with which she attacked your hair. I love it!

Eek, I can't imagine rehearsals that go too fast for even you! But hooray for big fat fatty and her grooming routine to save the day =P

I suspect that even on your worst, tired, out-of-step night, you are an incredibly talented dancer. The words "nowhere near great" are a thin veil. :)

Also, I LOVE "massive black puddle of lard." It's so...full of assonance.

...except the black part.

I hope this week is stellar!

christina - ah, i'm glad you liked it. :) i admit i was quite proud of myself for "Frankensteinian 'Do'".

CC - i keep trying to think of it as a learning experience, but it's hard when it's Every. Single. Week. there's just no rest.

lala - um, the eyelids? yeah, that is a bit gross. but i'll admit that i do enjoy the grooming. it's very soothing. and if you ever need it, my email is in my profile, so you can find it if you ever want to write again. thank you for the thoughts.

tense teacher - wow, that is some intense kitty loving. no, my fatty's generally very gentle with her grooming, so i don't mind too much.

jill b - wow, your retelling of the airport story just about made me blow out snot, too. thanks for sharing. ;)

bryan - "I once called the experience 'Stanford.' Now it is named 'Life in General.'" man, i totally hear you. for me, it's still stanford. but there's some life-in-general thrown into the mix as well. oh, and thanks for the strays reminder. ;)

tali - yeah, there was a time i was arrogant enough to think the same, but boy has this group proven me wrong. i have no idea how anyone learns at this speed. yet somehow, other people seem to.

jen - i'd obviously argue with your assessment of my dancing abilities, but it's a moot point, since you don't see me dance. but i'm glad you enjoyed the puddle o' lard statement. :)

TSM - i refuse to believe that, with or without the black part. the week is not starting out stellar, but maybe it will get better...