A Distant Light to Guide Us

Sometimes I don't realize the progress I've made until I have to point it out to someone else. It's easy for me to sit alone and think that nothing's changed - to think that it's been five months since this all started and I'm Still. Not. Better. And from there, it's a small step to wondering if I ever will be. But when I talk to others who are struggling, I find myself encouraging them by talking about the progress I've made.

In a recent conversation with a dear friend who is now struggling with a depression of her own, she said, "It just feels like it's never going to end. I look ahead and all I see is darkness." Boy do I know how she feels. And I told her as much. I told her about how hopeless I felt all those months ago, how convinced I was that there was no other side, no better place to be reached. But I also told her that I see it now, that light at the end of the tunnel. It's far away, just a tiny light in the distance, and sometimes things get in the way, and I lose sight of it again. But it's there.

"Finally, a friend came by the hole, and the man said, 'Help! I've fallen in this hole, and I can't find the way out.' So the friend jumped in the hole with him. 'Why did you do that?' asked the man. 'Now we're both stuck in here!' But the friend responded, 'That's okay, I've been in here before. I know the way out.'"

My friend was not thrilled with my story, as she pointed out, "But you don't know the way out! You're still here!" I admitted that this was true - I am still deep in the hole myself. "But," I told her, "I know there is one. I can see it there. And we can find our way to it together."

And so we shall. Someday. 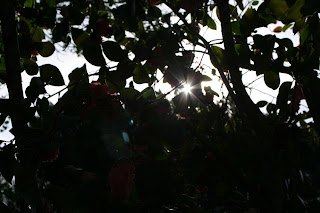 we can, the three of us, find a way out together.

in the meantime, we can sit in the darkness and scheme. bwahaha.

I will bring the chips and wine... we can have ourselves a shindig.

This is a great story, both this post and the story within the story. :)

Boy, does that tunnel seem long sometimes. It really is one step at a time.

Doesn't matter if you're still in the hole yourself. There are more than just the two or three of you who have been there before. To stretch a connection to another post, I might say that "none of us knows all of the way out, but all of us know some of the way out." Everyone's path will be unique, but you have friends along the entire way.

i've been lurking for some time now (i know, i didn't out myself during national de-lurking day or whatever the heck it was) but this post spoke to me. here's what it called me to tell you:

when i was in the depths of my own dark depression, the only thing that was remotely helpful were people jumping into 'the hole' with me. just sitting with me, in my darkness, silently loving me. not begging me to come out, not pointing out all the wonderful things in my life, not reminding me that things would get better, and not even offering their own stories of struggle, loss, and pain. just sitting there, ready to listen when i felt i could talk.

having people be okay with my un-okayness was the biggest gift i could've received. it didn't entirely stop the guilt i felt about making others worry about me...but wow, it helped.

you are not alone in your hole, and writing about that helps link all of us together. thank you for your blog!

Did you take those pictures? They are beautiful, inspirational. I reallly like Graham's reference. Everyone helps everyone else and the positive energy abounds.

Very thoughtful and inspiring. I love the pictures too - they capture my thoughts precisely!

You know, being in there together means you're not alone. There's a lot to be said for that.

Good luck with your courageous path out of there.

Cheers to the wisdom of Leo McGarry.

Beautiful story and beautiful pictures. And I too agree with Graham - all of us know some of the way out.

jitta - and eat strawberry pie, too!

lala - hooray, this is shaping up to be fun times in a deep dark hole. :-P

graham - you bring up an excellent point. i think maybe it's a bigger hole than i think it is, and there are more people in it than i realize, and everyone's at different places within it. thanks for that reminder.

anonymous - i appreciate your choosing to delurk, because you have a lot of good stuff to say. you're right, and i've noticed that too. the people who've helped me most have often been the people who've given the least explicit "help." they're the people who hug me, who point out the joy of my laughter, the people who take me shoe shopping, the people who let me cry without judging me for it. it's a kind of support i need more than anything, and while it may seem to them not to be worth much, it's the best anyone could do for me. and maybe i should remember that when i find myself trying to "fix" other people who are depressed. thanks for commenting. finally. ;)

mom - yes, i did take those pictures. i'm actually finding my photography hobby inspirational in many ways. i'm glad i picked it up.

CC - thanks! yes, they did seem to perfectly accompany the stories i was telling. i'm always glad when that happens.

jill b - there is, indeed, much to be said for companionship in the depths of despair. and not even physical companionship, necessarily. the bloggy kind is remarkably healing as well. :) so thanks, you, for being around for me.

angela - thank you much. i'm sure i'll be keeping everyone posted on my progress. :)

OP - is that who it's by? i've just had it passed to me by word of mouth. thanks for the tip, though!

tali - thanks, dear. and yeah, i know it. i just have to be willing to let others help me. i'm doing pretty good with you and K. so far, right?

TSM - thanks, lady. it's good to be able to put it into words. healing.