My Enabler, My Friend 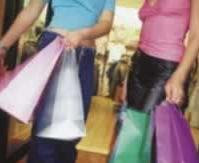 You know how sometimes you know people, but you don’t really know them – I mean, not well – and you’d like to get to know them, because you feel like maybe y’all could be really good friends, if only you could find time to catch up and hang out and chat that didn’t involve meeting in passing at a friend’s party when you’re surrounded by tons of people with whom you have to catch up, and so since you’d like to get to know them, you finally decide to hang out, and while hanging out you realize that you were totally right, because this person is actually just as cool as – if not cooler than – you’d imagined, and you’re all excited to be finally spending time together, only to discover that this person is a horrible enabler of your clothes-whore tendencies?
No? Am I the only one this has happened to?

Well, it happened to me recently. Reda and I have been saying for… oh, maybe six months or more that it would be great if we could see each other and chat somewhere other than housewarming parties, dance events, and other random social events. Finally, we decided to go ahead and make it happen, particularly since I’m trying to get out and be more social these days anyway. So Thursday night, she invited me to “Ye Olde Clothing Swap,” a small event she was throwing with some other girlfriends of hers. For those of you unfamiliar with the clothing swap idea, I’ll explain:

The concept is simple. You have clothes you don’t really wear anymore, but they’re still nice, so you haven’t quite convinced yourself to give them to Goodwill yet. You would like to get some new clothes, but you’re not quite up to spending a lot of money on them. The solution is the clothing swap. You bring your wardrobe pieces that you never wear, as do other girls, and then you all try each other’s stuff on. You leave without your old unwanted things, and go home with other people’s old unwanted things. You know what they say – “One man’s trash is another man’s treasure.” Clothing swaps can also be casually referred to as “Naked Lady Parties,” because, well, there’s basically just a whole bunch of women hanging out in someone’s living room stripping constantly to try on each other’s stuff.

So yeah, this is totally my kind of event. I had actually donated a bunch of stuff to Goodwill when I moved, so I didn’t have nearly as much stuff as I might have otherwise. But knowing they would be going to good homes, I gathered about 10-15 items of clothing that I haven’t worn in a long time and packed them up to bring. Two of them ended up coming back with me, ‘cause they found no homes – sad! – and they came home with about 35 new friends. That’s right, new shirts, sweaters, skirts, pants, and even a new pair of shoes (shoes that are so ugly, btw, but I am completely in love with them and their ugliness). Check out this awesome 1930’s-esque outfit I put together from a new shirt and skirt I got: 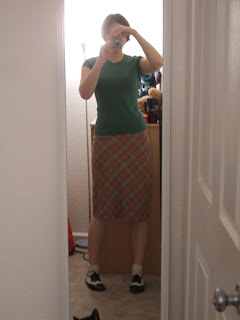 Oh, and can we say SCORE! for the fact that someone gave away a brand-new Hooters shirt? SCORE! 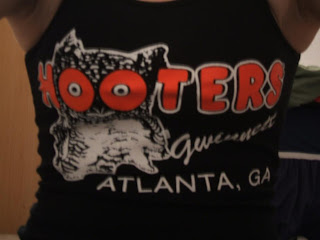 So, um, yeah, clearly a clothing swap was exactly what my crowded closet needed. Thanks, Reda! Oh, and big thanks to Tali for accompanying me, because I get very insecure going to small social events alone when I know I won’t know many people. Thanks Tali!

Last night, Reda and I made plans to grab some dinner together and go to the mall. Our purpose at the mall was fairly straightforward – Reda needed brown boots and a miniskirt. Mall shopping is much easier when you have specific missions in mind, so we headed out with our eyes on the prize(s). Great, except that more than half the stores we stopped in were shoe stores (because we were looking for the boots), and you know me and shoes. I would like to give myself a major pat on the back for only walking out with one new pair of shoes (well, and plans to order two pairs online because they didn’t have them in my size). I also walked out with two new shirts (seen here with pants I got from Reda at the swap): 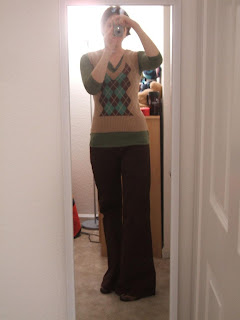 And this fabulous new hat: 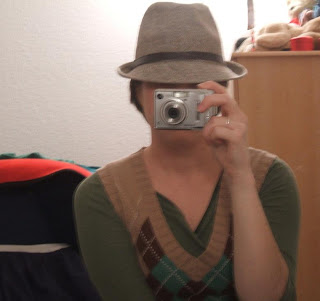 And there were some headbands and a new purse, too. I think I’m just lucky I didn’t let her talk me into the adorably bright orange ballet flats with the gold bow, because where the hell would I have worn those? Seriously – the enabling? It’s so not helpful.

But soooo awesome for my wardrobe. 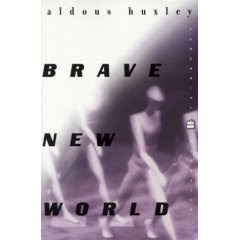 I read this during the summer after my sophomore year of college. I was staying with a nice lady from the Catholic community for six weeks while doing an internship on campus. She had a fabulous book collection. And I don’t just mean which titles she had – I mean the books themselves were really great. They were all leather-bound with gold embossing, and boy did they look classy in their glass covered bookshelves. She told me to help myself to anything I might want to read, so I did. Those kinds of books just make me want to be intellectual like you wouldn’t believe. It’s my goal to someday have a collection like that.

At any rate, Brave New World was the first book I picked up that summer to read, and it was excellent. I was entranced by the dystopian future it presented, and the social commentary not-so-thinly veiled in the plot. The characters were vivid and genuine, and I found myself simultaneously disapproving and understanding of them. I think it only took me a couple nights to read through it, and I was eager to pick out my next book. Unfortunately, my next choice – Robinson Crusoe – was a major letdown after this one.

Seriously, I have never known where you got the "shopping" gene. My feet do not enter a mall sometimes for months at a time. Must be an argument for the nature vs. nurture controversy. Your grandmother excitedly mentioned to your aunt about going shopping when we are all together next week for her 80th birthday (blew our minds) but then I correctly guessed that we would end up at Lowe's hardware store (we're picking out lamps). Maybe some genetic mutation?

I love love love old and well-bound books. I feel you on that one.

And thanks for the link-y love =) You're very welcome for the ride and escort.

Last random note - I was too slow getting around to comment on the previous entry, but I'm a huge fan of Ender's Game. It doesn't bother me that Card invents new physics - it makes for an awesome storyline and that makes it ok by me. You should definitely also check out Ender's Shadow. It covers approximately the same time period as Ender's Game but it's written from Bean's perspective. Very cool to be able to see the same conversation from two different characters' perspectives.

Wuh oh. The nerd in me is rumbling. Quick! Hold it down! Hold it down, for the love of all the things you hold dear!

1. But it better be cooler than what it replaces. Either it must explain all of what we observe plus make additional observations; or it must separate entirely from our physics in a compelling, coherent way.

Think of it this way: In a particular space-faring adventure, can space be replaced by the ocean and the starships and outposts by sea-faring vessels and islands w/o changing the essential story? If so, then the sci-fi is not sci at all. In the case of "Ender's Game", the question is answered in the affirmative.

2. The new physics needs to be consistent. A careful reader should be able to predict what happens or explain what happened. That faster-than-light communication is possible should not be an oh-by-the-way thrown in ten pages from the denouement. Because it makes a difference. For example, time travel to the past is possible. The issue of causality must be addressed.

3. The new physics should not be such that a better story could be told than what the author has written. Most assuredly communication is the least interesting thing one can do with a device that transmits information faster than light.

Yikes. I should not have read tali's innocent remark just after consuming chocolate. Something's buzzing. Oh, that's just my brain.

Alfred: Dude, seriously! You're posting a nerdy rant against sci-fi on sweet, sensitive Lara's blog? You know what? You're a real space cadet. Oh, wait, you are. Anyway, can you see what I'm doing, Alfred? I'm rolling my gigantic eye with disbelief.

By the way, Alfred, thanks for sharing your chocolate with me. Delicious. But, my goodness, the caffeine! Yeesh.

I now recall the chief reason I abhor "Ender's Game" (and by now you can tell I really, really dislike that book): the violence. Space is magnificently complex and poses all sorts of challenges to humans. Why does a sci-fi book that young adults read simplify all of that and instead focus on silly battle maneuvers? Young adults, especially boys, are already attracted to the unrealistic depiction of violence that permeates our media. Violence is so easy: it presents an obvious focus for one's energy. But the result is destructive rather than constructive: and how much easier is destruction than construction. The faster-than-light communication gambit - ridiculous for the reasons I enumerated earlier - at the very end just furthered my outrage.

For a disturbing view of a real "Ender's Game" of sorts, read last Sunday's featured piece in the NYT Sunday magazine.

mom - grandma is crazy. that is all.

and is it just me, or did you call me a mutant in that last sentence?

tali - linky linky! i've been meaning to read ender's shadow. i'm sure i will someday. when my schedule eases up a bit.

alfred - i just don't even know what to say to you and your nerdy physics comments. i'm so not sciency enough for it.

alfred - and again, over my head. completely.

I know I'm not exactly on the commenting ball here, but Warcraft has been eating up all my time as of late. Anyways, I, too, have recently made some shopping-enabler friends from my teaching program (also stylish English people, like yourself). I'm sure it will come back to bite me later, but right now it is actually nice to have people to shop with, since I'm having to build up a professional wardrobe from scratch. It's probably a big bonus that one of the gals is a compulsive bargain hunter, so our shopping tends to be cheaper then it might otherwise turn out to be. She's even organized a shopping expedition to Kohls for a bunch of the gals in our program this Saturday, since there is a sale going on and she also has some coupons.