It’s a new year, and the optimistic part of me – yes, there is one, small though it may be – would like to look on this as an opportunity to begin anew. This could be a fresh start for me. A new year - with new possibilities - lies before me, and maybe it’ll be a good one.

I am officially moved out of the condo I shared with J., and officially moved into my new apartment. (Huge thanks to Lady M, Fourth Breakfast and her husband, Jess, OP, Charcoal, and, of course, J. for all the help with the move.) It was hard, I won’t lie. There are a lot of awful feelings associated with moving out of my first adult home, the home in which I planned to begin a family with J. But I’m not going to dwell on those, because those feelings are around all the time, whether I like it or not. Instead, I’m going to focus on the positives.

It’s unusual for me, so be patient.

Seeser said she’s actually a little jealous of me, because I’m getting to do something she never got to do. I’m going to be living the 20-something single life, sharing an apartment with a fellow 20-something single, working and playing and generally having relatively few responsibilities in the world. There’s something to be said for that kind of carefree living. It’s a stereotype – a cliché – certainly, but that doesn’t mean it can’t be fun. We can have movie nights with friends, we can have people over to play board games, we can go out to a bar and chill on a Friday night. Maybe this will be fun.

So maybe things can start looking up for me. Maybe it won’t be so bad. Maybe 2007 will be exciting and full of promise.

Day 3 of SaBloBoMo: Love and Other Near-Death Experiences by Mil 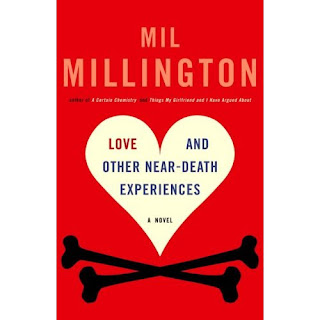 I first encountered Mil through his website, Things My Girlfriend and I Have Argued About, which is hilarious. I read through it over the course of a few slow workdays, and at times I had tears streaming down my face. The Ex signed up for Mil’s mailing list, and soon convinced me that I should, too. Then, one day, in Borders, I decided to check out Mil’s novels, and see if any of them looked interesting. I picked up LaONDE, and within six pages, I was laughing out loud. So I bought the book, and never regretted it.

Basically, the main character is incapable of making decisions – like, literally, physically, he can’t do it. Paralyzed with fear, he decides to figure out how to fix this problem, and along the way starts meeting other equally zany folks who join him on the journey. Oh, and also? Someone’s trying to kill him. Minor problem.

I think I'll have to check that site out, although I have a nagging feeling I've kind of heard of it before. Silly scatterbrain!

omg, your comments aren't called raise your hand anymore. what's up with that?

i am glad you can start to see the silver lining in your situation, dearest. very tough, i know.

you'll always have your friends!

I hear some dastardly criminal stole that book and still hasn't gotten it back. He should hang for that!

aly - the site is awesome, hilarious, amazing, etc. definitely go check it out, even if you've already seen it.

sassy - they are again now! i fixed it! the new template layout made it go away temporarily, but graham helped me fix them.

justin - that's TRUE! where the heck is that guy with my book? ;)