[We did it! 500 comments! Congrats to Tpiglette, who was the lucky 500th commenter. Her prize is a sleepover with me… which is actually more a prize for me than her. Hooray for Tpiggy!]

In today’s post, I’ll clue you in to a little bit of Lara Vernacular. These are some of my favorite words that I use in my informal language (but NOT my academic language, I promise). You all should pick your favorite and use it in a sentence today – I’ve given some handy examples of usage for each one.

- craptastic: really awful
Condensed version of fantastically crappy, to be used when “crappy” just doesn’t cover it. Ex: “I’ve been feeling pretty craptastic these last few months, but I guess that’s to be expected.”

- fantabulous: really great or amazing
Combination of fantastic and fabulous, to be used with neither “fantastic” nor “fabulous” is expressive enough for the situation. Ex: “Mrs. Chicky, that new laptop of yours is fantabulous!”

** Note: Both craptastic and fantabulous can be intensified or made more extreme by inserting “f*cking” after the first syllable. When work is indescribably awful, you could say it was “crap-f*cking-tastic.” Similarly, for anything really great, it is “fan-f*cking-tabulous,” though this can also be said sarcastically and used as a synonym for “crap-f*cking-tastic.”

- blarg: yuck; blech; ugh
A general expression of disgust, upset, sadness, or frustration. Ex: “Mocha, how are you feeling today with that virus all up in your respiratory grill?” “Blarg.”

- shiggles: fun or amusement
Condensed form of “sh*ts and giggles,” to be used as justification for a particular course of action when no legitimate justification exists. Ex: “Just for shiggles, let’s tour the Tour de Blog.”

- er: um; uh
A filler word (e.g. um or uh), to be used as an indication of reluctance or uncertainty, especially if you need to stall while thinking of something polite to say. Ex: “What do you think of my stripper shoes?” “Er…”

An interrogative word (e.g. what or huh), to be used to indicate confusion or request clarification; it serves a similar function to WTF?. Ex: “These shoes are kind of daggy.” “Er?”

- ack: oh!; oh no!
An exclamation of surprise or dismay, to be used when facial expressions cannot be seen (IM, blog, or email, for example), or when Botox has impeded the ability to make facial expressions at all. Ex: “One of your students brought a GUN to school? Ack!”

And my personal favorite:

Which Lara-ism will you incorporate into your vocabulary today?

Okay, I did buy the last two pairs I wanted this afternoon, but I had to order them online, so they won’t be here for a week or so. I was telling my mom recently that after this whole month of shoes, I’d feel obligated to take a picture and post any new shoes I buy from now on (okay, not *just* obligated – I’d be excited to do it, too). But she brought up a good point, which is that after December ends, I should keep all new shoes a secret, so that next December I’ll have enough new and exciting shoes to do the second annual LaBloShoeMo. It’s going to be tough, though, I’m sure, to keep my shoes from my loyal readers. It’s a sacrifice I’m willing to make, however, for a successful LaBloShoeMo, part deux. 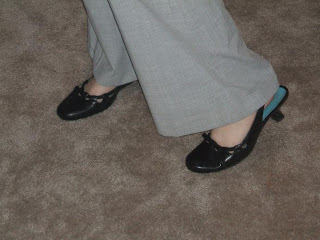 Kind of cheap, ‘cause these are just the black versions of the Day 7 shoes. But I like them, and shoes look remarkably different when they’re in such different colors. I like the flash of teal when my heel picks up as I walk, and of course I like the comfort of the round toe and low heel. That’s probably most of the reason why I bought two pairs of the exact same shoes. Oh, and what’s that in the front? A cute little bow? I’m so predictable. 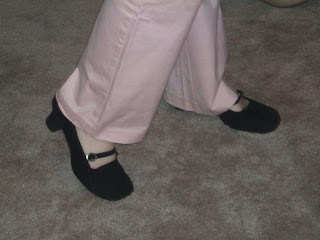 These have been around for a few years now, but I like them so much that I can’t bear to get rid of them. I like them best with these pink pants, but they’re versatile and look good with lots of slacks. I like the mini-MJ style with the small strap across the front, and I love the look of a nice French heel.

I win I win! ;) And yay for sleepovers! We'll have to figure out what kind of fantabulous stuff we're going to do. (Did you like how I so inconspicuously used a Lara-ism?) :-D

Or how about using as many Lara-isms as possible in one sentence:

"To the kick off the new year and, er, stick our tongues out at a craptastic year that was just a whole lot of not awesome, Tpiglette and Lara will have a fantabulous sleepover just for shiggles - no ifs, acks, or blargs about it!"

Hmmm...maybe someone else should try...

dude. you cannot mean to say that there will be no more SHOES? I mean... I love your shoes. I want to see more. You... you can't just go cold turkey on us!

And I, too, have Sassy-Isms. Some come from being southern, some from that I'm weird. Me? Weird. Never!

I like shiggles the best. My best friend likes to say recockulous. What do you think about that? Too phallic?

And I am proud - I've met someone else who uses the word ACK! in real life. I thought I was all alone. We shall be ACK! SHOES! twinnies.

I am loving your Laraisms. Fun. Wishing you the happiest of new years!!!

I'm going for a whole lotta not awesome (I speak faster and with less lip movement). I intend to spread it throughout this glitzy, fantabulous city.

tpiglette - we'll watch a cheesy movie and paint our nails. maybe we'll even braid each other's hair and tell ghost stories. oh, except both of us have short hair now. (excellent use of lara-isms, btw!)

sassy - yep, no more shoes. cold turkey. i'm cutting you off. what are your sassy-isms? post some!

OP - recockulous? for ridiculous or what? i think your friend is crazy.

sunshine scribe - glad you enjoyed! did you like the allusion to your dad? ;)

mom - the glitzy, fabulous city will be all the better for your spreading "a whole lotta not awesome" around. let me know how it works out.

amanda - that's a whole lot of whole lot of not awesome (whoa, i sound like i'm stuttering). and yes, 11 whole months for more shoes. but there will be other things in the meantime, so keep reading. :)