Those of you who have been reading for a while may remember a post from the summer where I complained a bit about having missed out on visiting Hooters, one of my favorite places of all time. I know, that’s a big admission to make, since Hooters is not necessarily a widely popular location, especially among the female half of the population, or anyone with an ounce of intelligence. But I love Hooters. As you can see from the picture to the left. For one thing, I love the food – Hooters has the best buffalo wings EVER. But also, I’ll admit that there is something to be said for the “delightfully tacky, yet unrefined” atmosphere that gives it some strange sort of down-home charm. Hard to explain, but there it is. I *heart* Hooters. 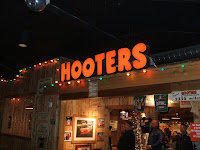 Given that, I was heart-broken to miss out on a Hooters visit back in August. But today, I remedied that, and Mom, Seeser, and I went to visit the Hooters Casino Hotel. And I have to tell you that, just as you might expect, it was awful. Not awesome. Awful.

First, our visit began with a ride in an elevator that looked and sounded as if it had been built in the 1960’s, and was last maintained sometime around, oh, say, never. It shook and made creaking clicking noises for the entire four and a half minutes it took to descend two stories. I had to hold myself back from leaping out, kissing the ground, and thanking God for getting me through that horrible ordeal. 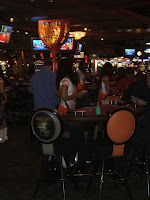 When we stepped out of the elevator, it wasn’t too bad at first. We were in a small elevator lobby that smelled sort of like an old, comfortable cabin – woodsy and earthy. Made sense, since most of the wall paneling and flooring was wood. It was kind of nice, really. Then we stepped into the casino part, and it smelled like a grandmother’s house. Not the nice grandma, whose house always smells like potpourri and fresh-baked cookies, but the yucky grandma, whose house smells like cigarettes and cat pee, and whom you only visit twice a year, and that only because you have to go to get your routine $5 Christmas and birthday gifts. Yeah, that’s what this place smelled like.

As we walked through, we saw workers and customers alike, and let me tell you – these were NOT attractive people. Most of the women working there looked like they were sliding down the back end of 40 or so, they all needed dye jobs real bad, and you’d think they’d been made up by a blind mortician from the ‘80’s what with all the blue eyeshadow and hot pink lipstick. What ever happened to hot Hooters girls? Also, I didn’t even think men were allowed to work for the Hooters corporation, but apparently they are, and apparently attractiveness is not on the rubric for hiring them. I think I visibly shuddered. 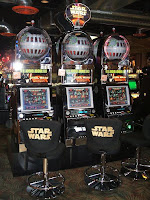 As for the customers, well, let’s just say that this bank of slot machines is catering to the major demographic – aging nerds who have rarely, if ever, seen a real-live woman in their entire lives. I was actually afraid one of them might come up and poke me, just to see if I was real and not inflatable. We were walking fast, trust me. I did not want to stay in one place for too long around these people. 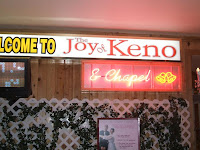 Okay, so Hooters is supposed to be delightfully tacky, right? I’m down with that. I can dig it, really. But who in their right mind wants to get married at Hooters? Seriously. I mean, I just can’t even imagine the joy a bride must feel, walking down the aisle with her man by her side, staring at a middle-aged lady in orange polyester shorts saying, “Do you take this guy to be your awful husband for better or worse and other stuff forever?” I like buffalo wings and all, but a Hooters wedding? That’s just sad. 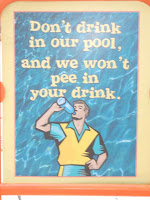 Also, can anyone explain this sign to me? It doesn’t even make all that much sense, but I’m concerned about what events led to this needing to be stated explicitly, on a sign, in the pool area, for God and everyone (including the health inspection people) to see. Also, given the content of the sign, is anyone else wondering what that guy is drinking? 'Cause personally, I find this whole thing remarkably disturbing. 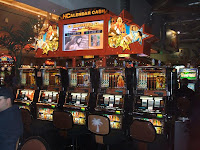 And what's with the skanky looking pictures of half-dressed women everywhere? I literally felt like I was trapped in an adult bookstore. I mean, it’s one thing to go to a Hooters restaurant, where the women wear tank tops and tacky orange shorts, but are generally covered up and just sort of amusingly scandalous. But it’s something totally different to play slot machines or table games that are decorated with pin-ups from the Hooters calendars, which really look exactly like the sheets of paper littering the sidewalks of the Strip advertising home-delivery hookers. I think I shuddered again.

Basically, I think this was just a case of too much of a good thing. Hooters is great and all, and I think I’m still pretty happy going to the restaurants anytime, but taking it up to the level of a hotel and casino? That’s maybe just going too far. Something good did come out of it, though – I got two new shirts! The classic tank (‘cause no girl’s wardrobe is complete without a Hooters tank): 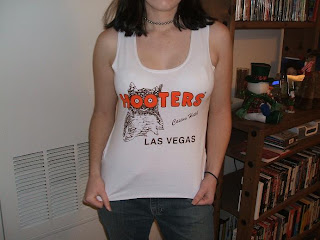 And this shirt, which is so perfect, especially in light of my recent outpouring of adoration for my mom: 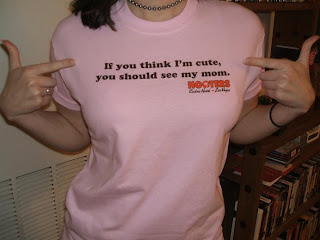 So, Hooters Casino Hotel, thanks for the warm welcome and the chance to live the dream. But a bigger thanks for letting me leave before I caught an STD from mere proximity to so many disgusting people.

Day 18 of LaBloShoeMo: The Blue Wedges 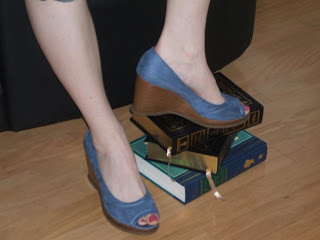 Okay, these shoes were a total impulse buy. They were so cute, and I wanted wedges, and that shade of blue was just to-die-for. I’ve worn them once in the three months since buying them. It’s just remarkably hard to match things to that style AND color, so the opportunities have been limited. I think it’ll get easier when the weather gets a bit warmer, because I can wear these with skirts a lot more easily than I can with pants. And yes, before you ask, they make me gargantuanly tall, but it’s a sacrifice I have to make sometimes.

Hee, a Hooters opened up in Sydney a couple months back - and signs on the back of buses everywhere around town were saying it was a FAMILY restaurant. *snickers*

I do want me a Hooters shirt though. Just sayin'.

I LOVE those shoes. If they were in black, I wouldn't take them off my feet.

First, I really do love how you're doing your own shoes. The blue? Mmmmm hmmmm. Love them.

Next, I didn't realize Hooters was actually aiming for "delightfully tacky", but they hit the mark. I like their wings, and the "guys" at work ask me there once in a while. However, this year, both "guys" are now dating other women (from WORK! gah!) and no longer ask me to Hooters.

They don't ask the girlfriend's either. Go figure.

You look HOTT in the Hooters shirt. Meow.

Thank you for the comment the other day. It's taken me this long to get around to everyone! ;-)

So true!I went to a Hooters in Jacksonville, Florida a few years back during a theatre conference I was attending. We were a mottly bunch - me, sort of a naive small town girl, my friend Anne, a pretty classic bull dyke and Martin, a very effeminate costume designer. They were so excited to go, I was embarassed. I remember thinking that it should have been called Wedgies, because in the scheme of T&A, there was a whole lot more nasty A than bodacious T.

I love your shoes! So cute. I have a grey suit they'd be awsome with.

aly - oh, i'm soooo sending you a hooters tank. as for the shoes, you could probably find them in black with minimal trouble. and yes, totally rocking it. i think sassy may be joining us with a few pictures in the near future, too...

mocha - yay! i love that i'm doing the shoes, too, so thanks for bringing me the idea! (that's two huge ideas you've given me in the last six weeks or so, after the "you wouldn't know just by looking..." starter.) hooters does indeed aim for tackiness, but sometimes, they overshoot. and you are obviously very welcome for the comment - i was glad to help. i'd totally buy a shirt if you did that, too. :)

amanda - ewww, sounds like a non-fun visit to hooters. i think the weirdest party i was ever in at a hooters was when my best friend and i went with her five-week-old daughter. two young women and a very small infant... at hooters. i think all the waitresses were mildly confused as to why we were there, but they were also thrilled, because we weren't hitting on them and they got to ogle the cute baby. we had a good time.