I have big news. See, when I’m stressed or anxious or generally going through big stuff in my life, I take it out on my hair. Or rather, I use my hair to get out all the crazy urges I have to do something drastic (well, usually). So today, I went to a salon, and showed the man a picture.

“It certainly will be a big change…” he mumbled, as he grabbed a razor and started hacking.

And now? Now, my hair is shorter than it has been since I was about two years old. And I LOVE it. Absolutely adore it! One of the other hairdressers came over at one point and said, “That’s adorable! It’s such a great cut!” Another customer, having just been shampooed, waiting for her stylist to cut her hair, said, “Oh my goodness – it frames your face so well! You look like a model!” And my sister, when I came out, said, “Wow, you look like a New Yorker – very cosmopolitan.” As for me, all afternoon I’ve felt cute, and bouncy, and fun, and attractive, and it’s been a very long time since I felt any of those things. It’s amazing how big a difference one little haircut can make in how I feel about myself.

Are you ready to see it? 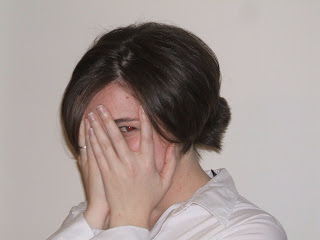 [I had to cover my face – you know, preserving anonymity and all. But if anyone wants a regular picture, feel free to email me and I’ll send you one.]

And a picture of the back, too: 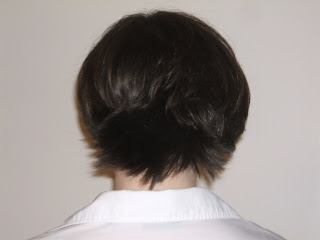 So yeah, big, HUGE change. But I am soooo in love with my haircut! After Aly’s most recent post, I feel very blessed to have come out so happy. :)

Tpiglette and Baleeted worked hard to help me, and they did a great job, but Blogger was not so cooperative. Here are the subject lines from the sequence of emails in my inbox from last night while we worked on this, complete with commentary:

Doesn’t that sound exciting? Don’t you wish you could have been a part of it too? Well, at least we’ve changed from “comments” to something with a bit more flavor. Thanks to Tpiggy and Baleeted for all their (attempted) help!

** Update: Graham fixed it! Thanks, Graham! I have no idea what you did, but thanks! It works now! :) 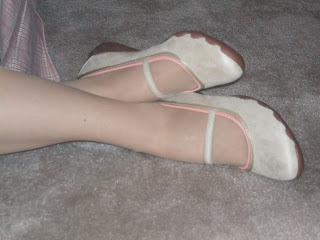 The last of the cream-themed shoes I so recently bought. These have a super comfy rubber sole, and a soft linen lining (the bit of pink you see there). Yet at the same time, they’re feminine and classy, so they will make great teaching shoes. Also, what do I love about them? All together now: “They don’t make Lara too tall.” Yep, that’s it exactly.

Hahahahaha...oh man. That'll rank right up there with "How'd you get the churro to sign its name?" in our history book. ;) Darn Blogger. Possessed, I tell you!

Wow! I LOVE your haircut, the back is just gorgeous.

I should re-word mine, because mine is definitely not short compared to that style, but is shortER than I wanted. Much shorter.

Am glad your comments bit is finally working, the simple things are always the fussiest to change.

And love the shoes. Phew!

Eek! So cute!! I love the haircut - can you send me a real picture, since I already know who you are anyway? =)

holy SMOKES! you chopped! i love!

Nice! I remember when I first cut off all my hair. The lady actually laughed out loud. Worked in the end, though. :-)

As for the comment thing, that should totally be possible to do. You aren't even on the new layouts system yet, right? (That would make it trickier.) I can take a look at it, if you like.

Actually, now that I think about it some more, it might really be easier in Layouts. Either way, though, it can work.

Love the haircut! I also tend to take my nervousness (or boredom) out on my hair, with mixed results.

you are seriously brave! but it looks great!

a) I love the hair! I have been trying to grow mine out for a couple of years, but I get the urge to cut it off every so often -- especially when I see great cuts like yours. Fabulous!

b) I love the shoes! I am in awe of the amount of shoes you have, especially after reading over at Aly's that you've got more shoes than December has days. Sister, that's nuts. But! Am still in love with the cream shoes. I wish I had more clothing to wear with cream shoes. Alas, I am boring, and tend to stick with plain black.

c) I've been meaning to comment for awhile about the Hooters thing. When I was recently in Vegas, we drove by the Hooters casino. Now, despite the fact that I was with a group of Marines who spent the long weekend ogling every female specimen in sight (even the ones on the little cards that the men hand out on the street), every single one of them refused to go there. One of them muttered something about how it was "sleazy." He was drunk, so I didn't believe him, but after reading your account? Dude. Am SO glad we didn't go, despite my love for Hooters.

tpiglette - no, not possessed. drunk. i'm sure of it.

aly - thanks! yeah, yours is not at all short compared to mine, but i can understand the "shorter than i wanted" sadness. and i'm glad the comments work now, too! :)

tali - picture has been sent, and i'm glad you like it. and yeah, i had the song stuck in my head all day too. but then i started singing "more than a feeling," and traded the songs. :-P if only i knew more of the words...

sassy - yep, chopped it all off. i love it too. :) and yes, GREAT teacher shoes.

graham - yes, i remember when you cut off all your hair too. it was a BIG deal! and THANK YOU again for fixing the comments stuff! you're the greatest super blogger comment stuffer guy (according to my mom) EVER!

teacher anonymous - i've never really been *unhappy* with any of the changes i've made out of a desire to have a big change. the closest i came was when i wanted to get blond highlights and the guy pretty much made me entirely blond. it just wasn't a good look for me.

ali - i'm not sure it was bravery really. i knew if i hated it it would grow back. and i knew i was going to a really good stylist, which always makes things easier. brave would have been doing this at supercuts. :-P

teacher jane - yeah, i had been planning to let mine grow out for the wedding, but obviously, there was no need to do that anymore. as for the shoes, i just love shoes. i have tons of black shoes, also, and everytime i go shoe shopping, i want to buy more. but then i realize there are really only so many black shoes i really need, and i usually hold myself back. it's getting tough, though. regarding hooters? definitely stick to the restaurants - they're "delightfully tacky." the hotel? "sleazy" is the perfect word for it.

xochitl the xoloitzcuintli - um, i have no idea what this is. you're starting to perplex me. seriously. but thanks! i'm glad you like it.

WHO ARE YOU? seriously, i'll pay you money. i'll treat you to lunch. just tell me! email me! something!

The form I assume suits your post or, in this case, your response. It's sort of a riddle to be solved.

nereus - unfortunately, solving the riddle of your particular form doesn't help me solve the riddle of who you actually are. i have precious few hints to go off, so you could still be any number of people. i have, however, figured out most of your reasoning for choosing particular animals. including your most recent one. i put to you this quote, though, about nereus:

"But Pontos, the great sea, was father of truthful Nereus who tells no lies, eldest of his sons. They call him the Old Gentleman because he is trustworthy, and gentle, and never forgetful of what is right, but the thoughts of his mind are mild and righteous."

so you're supposed to be truthful! never forgetful of what is right! who ARE you?!?!

i'm simultaneously filled with admiration for you and frustrated beyond belief. :-P

mous - HA! okay, i thought it might be you, but you know what threw me off? (you can hate me after this if you want.) you were saying so little! you used to be so verbose!

but actually, i'm glad this came up, because to be totally honest, i was planning to email you in the next couple of days anyway, just to find out where you'd gone. i'd been missing your participation around here. i'm glad you're back! (well, i guess you've been back for quite some time, i just wasn't sure it was you. but still, glad you're still around. :) )

Re: verbosity. I suppose I've had much to say lately but I've held my tongue. My friend Hugh already saddled your blog with a discourse on consumerism. Celia fainted Victorianly at the mention of Las Vegas; otherwise, your readers would have had to bear a stiff tongue lashing on resources (one can only imagine the tongue-lashing I can deliver). But your blog is not necessarily the place for my fuzzy, slimy, and floral colleagues and I to hold a summit on saving the world.

I can't wait to see your haircut in person. Looks cute!