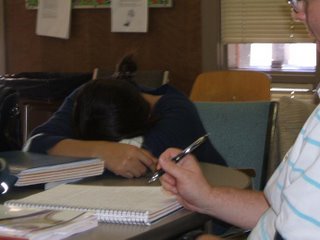 One of the funny things about my teaching program is that it’s a really intense and demanding program, filled with perfectionist students who push themselves constantly to improve and succeed (to the point of physical exhaustion, as we see to the left there), and yet all the professors are constantly reminding us of what has become one of the chief mottos of the program: “Just get it done.”

Just get it done.

Lesson plan to do? Don’t freak out and spend hours making it perfect. Just get it done.

Project to finish? No stressing out, no staying up all night, no trying to do a good job. Just get it done.

Concerned that you’re putting out second-rate crap that a five-year-old could do a better job on if he were high on paste and boogers? Don't worry about it. Just get it done.

Honestly, we are told this ALL. THE. TIME. We've got a horrifically low bar set for us here. However, it is the only practical solution. If we try to be our perfectionist selves, there is no way we will make it through the year. And that sucks, but that’s how it is.

Sometimes, though, even accepting that we’re just doing the necessary amount of work and no more, it can be hard to “get it done.” I’m having a real tough time with it these days. The crazy thing is, I’m the one holding me to some ridiculous timetable. Basically, I set a schedule for myself as to when I would finish all my assignments (both the ones that I have missed from being gone and the ones that are still upcoming). This schedule, if I stick to it, has me finishing everything by the end of the quarter, just like everyone else. No Incompletes in my grades, no extra work to finish over break. It would be the comeback of the century.

This schedule, however, is INSANE. I’d been sticking to it, until today. Today I had planned to have the rough draft of my case study finished. When I met with one of my instructors yesterday afternoon to discuss it, I had only an outline and my past logs. When she found out I planned to finish the study by today, she looked at me skeptically and basically said it was impossible. Instead of stressing out and staying up all night trying to finish, she said I should put in a solid effort and just bring whatever I had to class. I listened to her, nodded politely, and said to myself in my head, “Yeah, whatever, I’m still going to write the whole thing.”

I think this is a good time to break for a moment and explain something I’ve thought about and discussed many times so far over my time in this program. As a member of the English cohort, I end up having a lot of major advantages over some of my colleagues, like the ones from, say, the science cohort, or the math cohort. Everyone has to take Adolescent Development, and everyone has to produce a case study of one of his or her students. Said case study is basically a 30-40 page research paper, combining educational, developmental, and psychological theories with data collected about your student through interviews and observations. That’s right, it’s just a really big, involved paper.

You can see the unfairness here, right? Now, whether my writing is better, worse, or on an equal level with other students in this program is not really up for debate here. I’m sure I’m better than some, worse than others, and equal with still others. But regardless of my skill or talent in writing, I (and the other English students) just have WAY more practice with writing papers than the majority of our classmates. Whether I’m a good writer or not, I am an experienced writer. At least, relative to the math and science types, anyhow.

So when it comes time to bust out a major written assignment, I have a distinct advantage over many other students in my program. Unfortunately, I also have a major disadvantage, which is that, as an English major and a practiced writer, I all but refuse to turn in crap. I hear that a lot of students just cut and pasted their logs into some half-assed arrangement and turned it in as their draft. I mean, it’s just a draft anyway – they can edit later. I started to do this last night, but with even the first log I began editing it to make it flow more logically in the larger organization of the study (as opposed to when it was a stand-alone assignment). I just could not make myself hack the thing together and leave it alone.

One thing I had on my side is that I recently rediscovered how much more productive I am when I work in the library on campus, instead of trying to work at home. At home I have the internet and the TV and the piano and any number of things I could be doing instead of work, and I get easily distracted. At the library, I can concentrate, and I get a lot more done. And, in a strange way, being such a nerd – sitting quietly in the library, hunched over a book or a laptop, listening only to the sounds of other people being equally nerdy – is almost… fun. Well, if not fun, then at least satisfying. I feel like a good student, focusing intently on my academics and feeling like a success as a member of this program.

So even though I was moving more slowly last night than I might have hoped, I was moving, and being productive, and even feeling like I was producing good work. All seemed to be going well. Then, around 10:00 or so, my concentration went all to hell. Suddenly, I found I had mush for brains when I tried to get any work done. And even worse, my stomach knotted up, I was having trouble breathing, and my fidgeting (something I’ve been dealing with to a certain extent ever since I started on my meds) was about ten times worse than normal. WTF? What happened to being productive? What happened to my well-laid plans of a rough draft by this afternoon? Once I realized I wasn’t going to finish any more work that night, I gave up, let Dre take me out and be a bad influence on me, then went home and crashed by 2am.

You may safely surmise that the rough draft did NOT get turned in today. In fact, very little got done on it, and I’m feeling more overwhelmed by work than ever.

And worst of all, it completely threw off my schedule! The schedule I had painstakingly set for myself and that no one but me actually thought was reasonable. Hell, let’s be honest – even I knew it wasn’t reasonable. But after every crisis of my life I’ve tried to dive back into life and work and everything I knew as normal as soon as I could, no breaks. I took way more time off for my recent struggles than I ever have before, and I have been stressing about it ever since. I have gotten permission from EVERYONE in my program to take whatever time I need to get my work done. The only person I can’t get permission from is me.

I’m clearly going to have to sit down tomorrow and set a new schedule for myself. And this time? Maybe I’ll actually think about what I can do, and not just what I’ve arbitrarily decided I should do.
Posted by Lara at 10:44 PM

Gosh, sounds stressful and brings back memories of cramming a four year education degree into a one year condensed bachelors degree.

The memories! The weight put on at uni because of the damn vending machines! Gah.

I'm the same though; I have this huge accreditation analysis that I have to have done in the next couple of weeks and I get ABSOLUTELY nothing done when I work at home.

When I'm in my classroom with papers thrown all over the place? I actually get somewhere. Weird! (And trust the home to have air conditioning and the school to have nothing. Typical.)

You know why the motto is "Just Get it Done" right? Because when you become a teacher that is how you will live or at least that is how I did.

Again I will say, I think you need to losen up on yourself. I still think this is one of the issues that will drive you insane (again, no pun intended).

First, I'm totally with you on the study environment thing. If I can make it into a scenario where I'm playing a certain type of character and that character's role is to work really hard, it's much easier for me to get stuff done. Whether that's with a cup of coffee and reading material, or in the library hunched over a problem set, or whatever.

The other thing is making schedules like what you've described. It's amazing how much less stressed I am, as soon as I have a plan for when I'll get things done. It doesn't even matter SO much how much I stick to the original plan, as long as I always have a current one. Then I can put aside my worries about which thing I should be working on, because I've already decided.

Anyway, those are just things I've noticed about myself. Sorry for the blabbering...

Whoo boy... I've definitely been learning the "Just get it done" through trial by fire. I can't believe it's already December! It's still just one day at a time...

aly - yeah, i'm thankful i haven't started stress eating yet, 'cause i don't want to gain back all the weight i lost. hooray for productive work environments, tho. i imagine i'll be in the library ALL DAY tomorrow.

momma to lg - yep, i see the teachers at my placement school living by that motto all the time. it's a necessity sometimes (by which i mean pretty much all the time). and yeah, i think i need to lighten up on myself, too, but i'm having trouble doing it.

tali - i never thought of it as playing a character, but i think that's totally right. i'm basically pretending to be a productive student, and suddenly i AM a productive student! who'd have thought? like you, schedules and to-do lists are essentials for me. and never apologize for blabbering in my comments. me likey your blabber. :)

tpiglette - yep, trial by fire is part of what teaching is all about. and i totally hear you on the "one day at a time" thing. sometimes, for me, it's just one moment at a time. baby steps...